The Cuban president said that some of them formed families with Brazilian citizens and “honorably fulfilled their mission and commitment.” 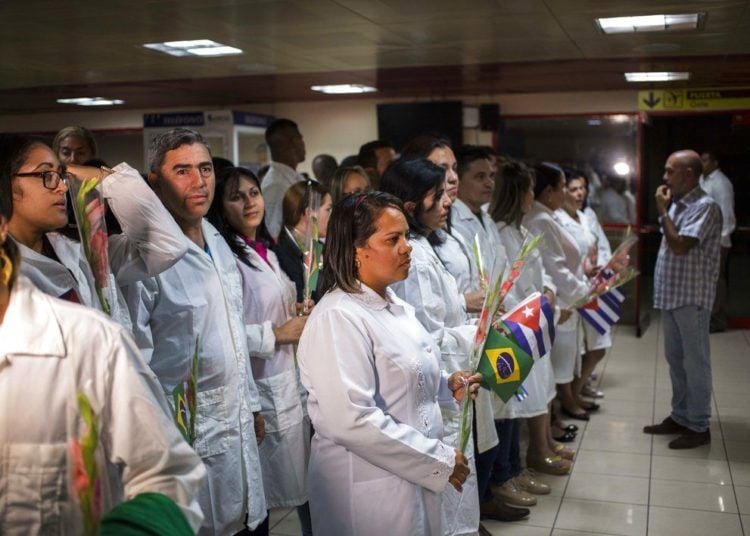 Cuban President Miguel Díaz-Canel last Friday criticized the “reactionary” position of Brazil’s president-elect, Jair Bolsonaro, and revealed that 836 of the more than 8,000 Cuban doctors who were withdrawn from the “More Doctors” collaboration program in that country have not returned to the island.

Díaz-Canel said that when his government decided last November 14 to not continue participating in the “More Doctors” program, “8,471 collaborators were in Brazil, 7,635 of them completed their mission, representing more than 90 percent of the total,” and he said that “until now 836 doctors have not returned.”

In his speech at the central ceremony for the end of the participation of the Cuban brigade in Brazil’s “More Doctors” program, Díaz-Canel said that among the doctors who served in Brazil, some formed families with Brazilian citizens and “honorably fulfilled their mission and their commitment” to the Caribbean country’s public health.

The Cuban president stressed that the work of the island’s doctors in places of extreme poverty, in favelas of Rio de Janeiro, Sao Paulo, Salvador de Bahia and in the 34 special indigenous districts, especially in the Amazon, was widely recognized by the federal, state and municipal governments, as well as the Brazilian population.

He also highlighted that during the five years of work in the program created by Brazilian Ex-President Dilma Rousseff, about 20,000 Cuban collaborators cared for more than 113,350 million patients in more than 3,600 municipalities and that the Cubans constituted 80 percent of all participating doctors.

“In Cuba, life-saving professionals are formed with an attitude contrary to mercantilist calculations. The altruism, generosity, willingness to save lives without thinking about the cost is a fundamental principle in their formation,” said the Cuban president.

He said that after the return of the Cuban doctors, Brazilian towns were left without their professional service but he affirmed that Cuba “had no other option” than to withdraw from the “More Doctors” program.

“It was impossible to idly sit by in the face of an arrogant and insensitive government unable to understand that our doctors arrived in his country moved by the urge to serve the people, take care of their health and their soul, not to negotiate with them,” he said.

In that sense, Díaz-Canel said that the “reactionary position” of the president-elect of Brazil, Jair Bolsonaro, “has made a part of his population vulnerable, risking the most precious thing human beings have, their health and their life.”

Last November 14 Cuba ordered the withdrawal of its doctors from Brazil following statements by the country’s president-elect, ultra-rightist Jair Bolsonaro, who described the island’s professionals as “slaves” of a “dictatorship” and also questioned their training.

A statement from the Ministry of Public Health of Cuba explained at the time that the decision was made due to the “threatening and derogatory” statements of Bolsonaro, who proposed “unacceptable” modifications to the program and alien to the agreements of the collaborators, established through the Pan American Health Organization (PAHO).

Bolsonaro, who will take office on January 1, is a harsh critic of the Cuban government and of the agreements signed by the governments of the Workers’ Party (PT), which in his opinion favored and financed a “communist dictatorship.”