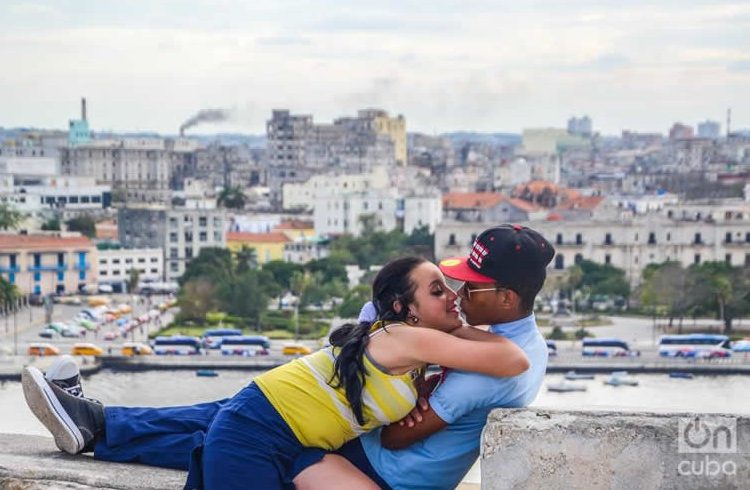 Dressed all in white except for a hot pink bow-tie, a confident-looking groom stepped out onto Havana’s Paseo del Prado. His bride, dressed in a billowing tulle dress, followed nervously.  Before ducking into the white Corolla waiting for them, they turn to pose for a photo outside the elegant Wedding Palace.

This was a rare sight.  Miosotis Suárez Iglesias, the chief notary at the Wedding Palace, where most people in Havana marry, performs 150 ceremonies each month.  She said this is only a small fraction of the number she performed in past decades.

Marriage is dying out in Cuba.  People still fall in love, move in together and share their lives, but few bother to marry.  Most couples now forego the paperwork that would formally bind their union.

Part of the reason could be the declining role of Catholicism in Cuban life.  Marriages were traditionally church ceremonies, and clashes between the revolutionary government and Catholic prelates helped create an antagonism to all things religious, especially in the early years of the revolution.

As formal marriages have become less common, the glittering weddings that used to mark them have also become scarce.  Marriages were once performed in many different rooms at the Wedding Palace building.  Now only two small salons are necessary.

Even for the few Cuban couples who do marry, an old-style reception is usually out of reach.   Food shortages are common here.  Government salaries hover below $25 per month.  In this climate, finding enough money and food for a wedding party is very difficult for common people.

“Tell me, who has money to rent a dress for the bride and a tuxedo for the groom?”, asked Jenny Rodriguez, a hotel maid who has a long-term partner but has not married.  “To buy makeup and hire a car for the evening?  Who has money to pay of a buffet so that your guests can eat?”

In its first decades in power, the revolutionary government gave every pair of newlyweds a case of beer, a cake, and a honeymoon weekend in a hotel.  The hope was that these gifts would encourage couples to cement their relationships legally, even without lavish parties.

Those perks are no longer on offer.  In the 1990s, the Soviet Union collapsed and Cuba lost its main economic partner.  The economy shrunk drastically and Cubans’ daily caloric intake fell by one third, so there was nothing extra to give to newlyweds.  In addition, officials noticed that serial brides and grooms looking for extra food or a weekend at the beach were abusing the reward system.

Now, given the high cost of wedding ceremonies and the lack of government benefits, Cubans are left with no real incentives to marry and celebrate with big parties.

Although many other causes may affect the number of marriages, such as emigration and the “millennials culture” which postpones formal unions, the economic one seems to be the most obvious.

Didier Martinez-Melló, a construction worker from Central Havana who has lived with his girlfriend for twenty years, reflected on this reality as he sat on a bench outside the Wedding Palace.

“Weddings are for the wealthy,” he said.  “Now we just live together. There are many ways to define a modern marriage today, you know. That tradition of large parties was lost when the revolution triumphed.  These celebrations are, in effect, capitalist ones.”

One group of Cubans still has enough money to host grand wedding receptions on a pre-revolutionary scale.  They are Cuban-Americans whose families moved years ago to Miami or elsewhere abroad.  Dozens of Cuban-American couples have taken advantage of the rapprochement between the US and Cuba to return to the island, stage lavish weddings, and invite friends and relatives to lavish parties that include full dinners, open bar and other luxuries.

Several wedding planning services have popped up in Havana to cater to this new market.

“We have these emigres with foreign capital and very high standards,” said Gladys, who works for an event planning service called Aires de Fiesta.  “Today in Cuba, if you have money, you can get whatever you need.  When you want a three-tier fondant cake that costs the same to make here as it does in Paris, how would you expect an average Cuban to pay for that?”

On its website, Aires de Fiesta proudly describes itself as an “elite” service.  Its weddings cost thousands of dollars.  They are popular among a small group of Cuban-Americans and rich Cubans, but remain beyond the reach of common Cubans still living on the island.

The Wedding Palace is now open for only a few hours each day.  Its grand reception hall is almost always dark.  On a recent afternoon, bored notaries filed paperwork for that day’s two weddings, and then went home. With few weddings to perform, notaries have been reassigned to other tasks.  Some handle divorces.

This article is one of a series written by students from Brown University, who visited Cuba on a trip sponsored by the Watson Institute for International and Public Affairs.