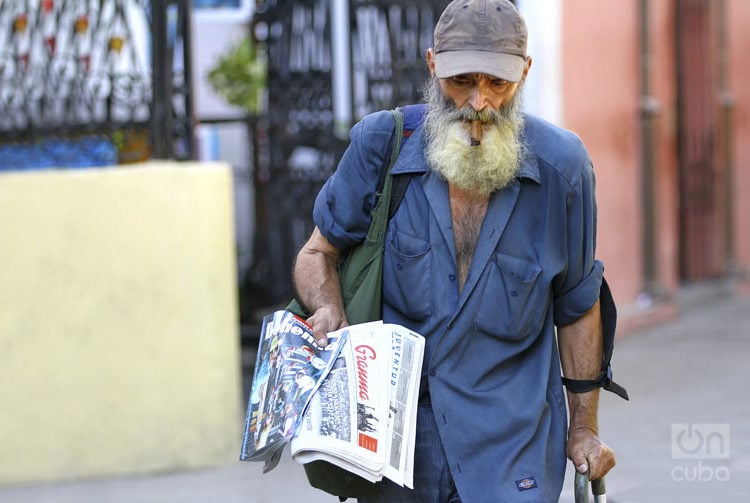 The number of seniors employed past the age of retirement increases in Cuba day after day. For some, finding a job is the only way to make up for low pensions, especially in the case of those who live alone, or with a spouse only, and cannot count on the much needed support of their children or relatives.

Alberto, 74, for instance, is a retired soldier who spends his work day at a sugar cane juice stand in Camaguey, a province in the central-eastern part of the country. For him, every morning goes by in exactly the same way: from 6:30 to 9:00 a.m., he removes the leaves from the canes, peals them and piles them up to take them to the place where they are milled.

Once there, he helps in everything he can until past noon, when he collects the waste and takes it to the nearest dumpster using a rickety cart. In all, he works 7 hours per day, for which he gets paid a varying daily wage of fifty to eighty pesos ($2 to $3 dollars), and a snack around 11:00 a.m.

“I’m making more here than I ever made in my best years working for state-run companies; at least in theory, ’cause the truth is that I also spend it all right away. It’s not enough to save for harder times,” says Alberto as he gets ready to go home in Simoni, a neighbourhood in the city of Camaguey, where he lives with this wife and the family of his oldest son.

Contrastingly with other segments of the population, these working seniors are mostly employed in the private sector, mainly in cafeterias, parking lots, public restrooms and other areas where business owners prefer to hire them for considering that they are more experienced and responsible than younger workers.

Seniors are also the absolute majority in “occupations” such as newspaper and magazine re-sellers –they buy newspapers at newsstands for 20 cents each copy, and then resell them for 1 peso; the prices of magazines varies-, sellers of assorted items at bus stops, hallways and sidewalks, and shoeblacks.

“This phenomenon is so widespread that it’s almost impossible to control or even monitor from a statistical point of view,” an official from the Ministry of Labour and Social Security told OnCuba, on condition of anonymity. “You can find an old man watching over the cars parked outside a house rented to foreigners, and the next day he’s selling candy at the train station. It’s very irregular, in a way that escapes our traditional supervision methods, which are designed for a more “formal” scenario, one that not always fits the reality of the country.”

The numbers confirm this lack of clarity. According to the National Statistics Bureau, 350,000 people over 60 are employed. This represents almost 20{bb302c39ef77509544c7d3ea992cb94710211e0fa5985a4a3940706d9b0380de} of that age group (2 million people, according to the last census), a proportion that doesn’t seem to reflect what’s really happening in a country where the participation of seniors in the work force is much greater.

Eloísa (68) and Miguel (67) decided to go back to work after retirement. Eloisa, who had been a school teacher all her life, went back to the same occupation, favoured by a new policy of the Ministry of Education to hire retired teachers.

“It makes me feel useful and it helps me remain active,” she said. “After so many years in a classroom, you come to miss it, even when the job is tough and not valued for what it is.”

Miguel’s story is different. A former human resources specialist at the Ministry of Sugar, he decided to go into retirement sooner than he should have, as he realized eventually.

“I could have kept that job a little longer, but after I gave the first step in the retirement application process, I just went on, without much thought,” he said. “Then, two months into retirement, I realized that I wasn’t going to be able to start the business I had in mind, and I had to start looking for a job. I’ve done all kinds of jobs: parking lot attendant, watchman, tyre puncture repairer.”

“Those who say otherwise are lying,” he added. “Most seniors have to work if they don’t want to starve. Who can survive on a 290-peso ($12 dollars) pension? It’s true that you can have some food at assistance centers, and that healthcare is free, but if your TV-set breaks down it costs a fortune to fix it. Even to go to the hospital you need to take a cab or a rickshaw. How can anyone afford any of that without a second source of income? By way of divine intervention?

The situation has worsened over the last three years, with the elimination of many subsidised services and supplies. Basic food products and personal use items are among the ones whose prices have experimented the highest increases -20 to 100 percent. Many of the products that used to be included in the already insufficient monthly rations, are now sold at higher prices in other kinds of markets.

The result is that many of them are forced to go back to work, many times doing jobs that are not appropriate for their age or have nothing to do with their previous experience. As in many other circumstances, necessity has the last word.

Miami Has No Ambassador in Cuba