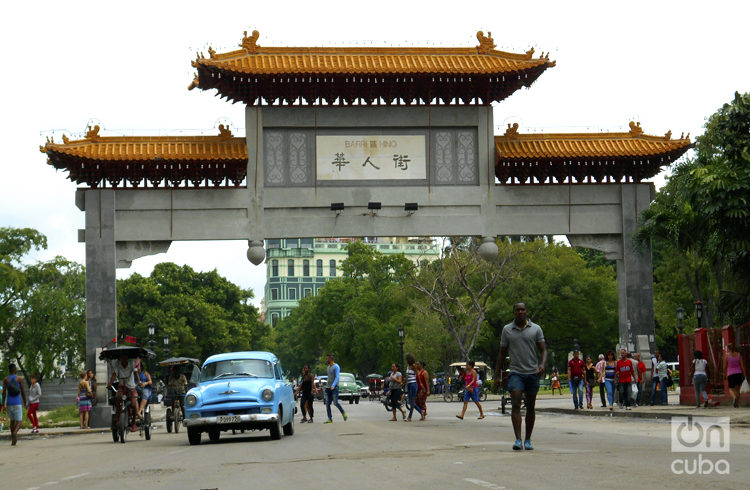 Faded Chinese letters adorn the facades of buildings in Havana’s Chinatown.  On the streets below, Cubans dressed in faux Chinese costumes compete to entice customers into restaurants dazzlingly decorated with red lanterns and gold trimmings.  Yet strangely, no Chinese people are to be seen.

Like the rest of Cuba, Havana’s Chinatown has gone through massive upheaval in the last century.  Once home to one of the largest Chinese populations in the Western hemisphere, Cuba now has only about 110 native-born Chinese people. Yet although the Chinese population has dwindled to almost nothing, Chinese culture is thriving in Havana’s “Chinatown without Chinese.”

Chinatown is a tourist hotspot.  Many stores and bakeries still retain Chinese-derived names left over from previous owners, though most sell mainly Cuban products and desserts, like flan or tres leches.  Some of the “Chinese” restaurants actually serve Italian food.

“After all the Chinese people left, the Cuban government kept the exteriors and filled the restaurants they left behind with Cuban people,” said Pedro Eng, an octogenarian Chinese Cuban.  “The Cubans learned to make some version of Chinese food using the ingredients they had, or they made whatever else they wanted.”

At Chinatown’s height in 1875, more than 40,000 people of Chinese descent lived in Cuba. Many were descendants of the 125,000 Chinese indentured servants who were brought to Cuba to work on sugar plantations in the 1850’s. Others came during the early 20th century, fleeing upheaval in China.  They opted for Cuba because US laws restricted Chinese immigration.

Many of the Chinese intermarried with Cubans and opened restaurants and small businesses, including Chinese-language newspapers and theaters.  After the government completed the process of mass nationalization in 1968, almost all of these Chinese left, and their businesses closed.

Jing Shan is one of the few who stayed behind. He came to Havana with his father in 1942 and now lives in a run-down retirement home in Chinatown.

“How could I have gone back?” he asked slowly in Cantonese, a dialect once commonly spoken in this neighborhood. “I didn’t know anyone in the United States, and I lost contact with my family in China, so I couldn’t return.”

Paradoxically, however, despite the steep decline in the population of native Chinese here, the number of Chinese cultural resources available in Chinatown is growing.

In 1993 a group of Chinese-Cubans formed the Havana Chinatown Promotion Group with the intention of “recovering” Chinese customs and traditions.  The group also helped transform Chinatown into a tourist zone.  Its efforts, which the government supports, have led to the formation of organizations including the Center of Traditional Chinese Arts, the Chinese Martial Arts School, and the retirement home where Jing Shan lives.

Improving relations between the Cuban and Chinese governments have also fueled the rebirth of Chinese culture here.  Aid from China helps to maintain cultural centers started by the Chinatown Promotional Group.  China also supports the Confucius Institute, where Cubans may take free lessons in Mandarin, taught by teachers from Beijing.

China’s impact on the Cuban economy is immediately visible.  Chinese products flood the market. Most new vehicles on the streets are made by Geely and Yutong, both Chinese brands.  Many Cubans use phones and tablets from Huawei, a major Chinese technology company that produces some of the only new electronics available in Cuba.  Through this largely one-sided trade, China has become Cuba’s second largest trading partner—and largest creditor.

For some people in China, the Cuban government’s emphasis on Chinese culture has opened a pathway into Cuba.  Tao Yan, who came from Shanghai in 1996 at the age of 32, said he was drawn into Cuba by its financial and cultural opportunities.  The lack of Chinese people and competing authentic Chinese restaurants, he said, offered a good business opportunity.

“Just a hundred Chinese are left from the earlier generations,” Tao Yan said.  “There are even fewer new immigrants like me.”

Tao Yan’s status as a Chinese citizen allows him to return to China to buy ingredients that are not accessible in Cuba. “Certain things, like shiitake mushrooms, you just won’t find in Cuba,” he said.

His efforts to provide authentic Chinese cuisine have been successful.  The restaurant, called Tian Tan, is popular and frequently highlighted in guidebooks.

New immigrants like Tao may represent a turning point in Havana’s “Chinatown without Chinese.” As the older generation of native Chinese fades away, the number of Chinese arriving in Cuba is expected to rise.

“I definitely think more Chinese people will come to live in Cuba,” Tao Yan said. “There is a lot of incentive to come.”