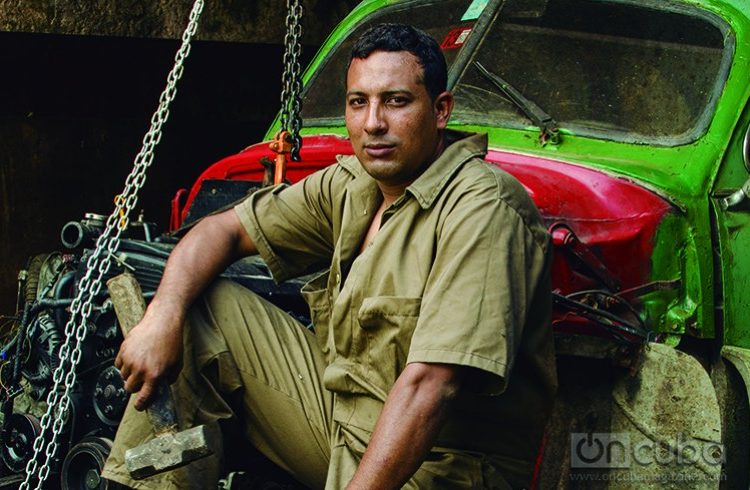 Finding a Doctor Frankenstein and visiting his laboratory is not an everyday thing. (Although, to be honest, this stand-in for a Tim Burton character that I’m presenting here is not the only one we have in Cuba). The legends and ghosts that haunted the space now occupied by his workshop/laboratory were frightened away by hammer blows and welding sparks.

From the age of 10, Yunier would escape to the lab, and when he was older, he studied alchemy and the anatomy of automobiles. He liked getting dirty with car guts. Today, he smiles and shows off his stained hands proudly.

He’s more than a doctor, because he does more than heal; he revives. He enjoys the difficult profession of reinventing life. He’ll fix any type of car, but he prefers the ones from ‘55—Fords and Chevys. “They’re the best lines of cars to enter our country,” he tells me. The almendrones [old American cars] are still running today thanks to us mechanics who are always coming up with a new way to get them to start. We change their chassis, steering, transmission, whatever.”

Yunier sees life where others believe there is no hope. He can skillfully adapt a car that runs on gasoline to one that runs on oil. “The most popular engines for adapting right now are Hyundai, Peugeot and Mercedes Benz. And for transmissions, it’s Hyundai and Toyota”. The mysterious arts that he has learned are useful in his conjuring and innovations so that the changes will be efficient. He reinforces the chassis, restores and adapts the brackets, sets the engine in place, and tests…. Everything has to be done carefully so that the resulting creature does not become a danger.

“The majority of these old cars still have the same name and body, but they’re totally different inside. Outside, they may be American cars, but inside, they’re Chinese, Russian, and Japanese—whatever!” A car that might seem like a hopeless case, with damaged body, useless engine, and no interior comfort can roll out of the garage like new within a year. A new set of innards, and it’s ready. The possibilities are limitless.

Right now, it’s a crucial moment for a ’48 Ford with a KIA engine that runs on oil. The rays of the midday sun light up Dr. Frankenstein and his “Igors”. (A few feet away, an assistant is welding.) They’re a little bit nervous. Yunier yells, “Step on it!” The engine roars aggressively several times and then purrs docilely. The yellow headlights flash on. The monster lives!