According to the official website of the upcoming Olympic Games, Juan Miguel Echevarría “will undoubtedly be one of the great contenders for the podium” in the Japanese capital, and “aims to beat the world record” of 8.95 meters, in the hands of American Mike Powell since 1991. 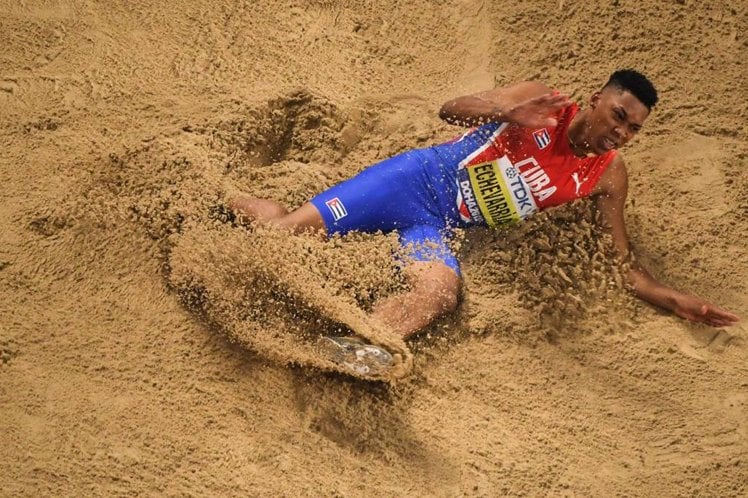 Cuban long jumper Juan Miguel Echevarría was considered “one of the great sensations” of the next Tokyo Olympic Games, according to the official website of the games, which this Thursday dedicated one of its cover stories to him.

According to the publication, Echevarría, 22, “will undoubtedly be one of the great contenders for the podium” in the Japanese capital, and “aims to beat the world record” in his specialty, of 8.95 meters, in the hands of American Mike Powell since 1991.

At the moment, his best personal record is 8.68 meters, the eleventh best mark in the long jump of all time, highlighted the Tokyo 2020 website, which also recalls that in 2018 the Camagüey athlete made a jump of 8.83 meters, “something that no one had achieved since 1995 in any condition, although it is true it was invalidated by a downwind of more than 2 meters per second.”

“He even surpassed this mark—although it was also invalidated due to the wind—with an astonishing 8.92-meter jump in March 2019 in Havana, during the Cuba Cup,” the website indicated.

The Cuban jumper, one of the rising figures in universal track and field, won the gold medal at the 2018 Indoor World Cup and, a year later, reached bronze in the outdoor world event. He recently secured a spot for the World Indoor Track and Field Championships, to be held in the Serbian city of Belgrade in 2022.

The Cuban smoothly dominated his specialty in the current indoor campaign, despite presenting some problems with his takeoff run. He topped the rankings with 30 points, thanks to his triumphs at rallies in Karlsruhe, Germany (with 8.18 meters), Lievin, France (8.25) and Madrid, Spain (8.14).

So far, the legendary Iván Pedroso has the best record for a Cuban jumper, with a mark of 8.71 achieved in 1995, a result that according to the experts seems achievable for the young talent of the modality in the world.