Even at its best, Cuba’s rice yields were nowhere near the world average in terms of water consumption. 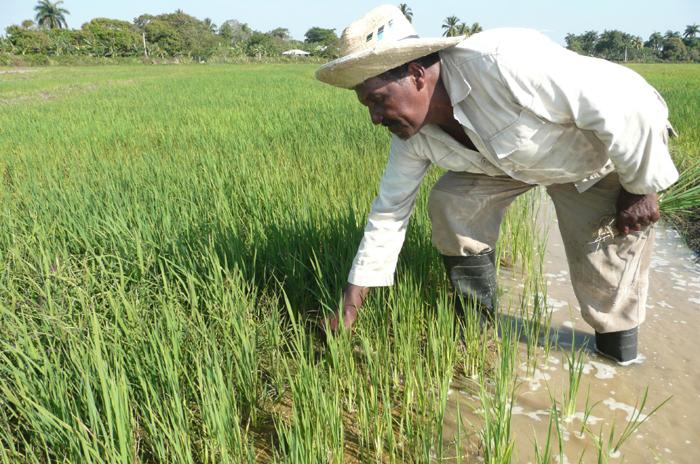 In early March, large amounts of fish were lost in the Muñoz dam, in the Camagüey municipality of Florida. Nobody probably knows how many tons it was. For days, the dead fish “swamped” the lowest points of the reservoir, which saw its reserves diminishing rapidly due to the lack of rain and agricultural use.

The Muñoz dam has a capacity for 116 million cubic meters (m³) of water, but it tends to store much smaller volumes. In May 2018, it was news that it had reached its “greatest accumulated water of this century,” when it approached the level of 88 million m³. Its waters are for, above all, irrigating rice, so they are usually consumed in large volumes in two specific periods of the year, coinciding with this cereal’s sowing harvests.

“It was known that with the ‘dry season’ the dam’s volume would go down; it is what happens every year. Only this time it happened faster,” says Michel, a Florida resident who in those days traveled twice to Muñoz to look for fish. The workers of the fichery enterprise of the province, PESCACAM, could not cope with catching clarias, tench and tilapia that were at risk of dying due to lack of oxygen. Part of the fish was lost due to lack of proper transportation and refrigeration.

Similar episodes were expected in other dams in Camagüey, which PESCACAM barely had the means to deal with. The lack of resources prevented it from taking advantage of that kind of “fishing harvest” that takes place every year between February and April, the last months of the dry period. In a few weeks, the dams release hundreds of millions of m³ of water that are not replenished until the June to October rains.

The dilemma of water and rice

In 2020, 49.6 percent of the “fresh water used in Cuba” was used for agricultural irrigation. It was around 2,771 million m³, 110 million more than in 2016. To put these figures in context, it is worth noting that in the same period between 460 and 507 million m³ was for household consumption, and those of areas such as industry, construction and energy production did not exceed — as a whole — 200 million m³. Only the statistics corresponding to “other economic activities” (among which tourism is included) reached digits of some relevance compared to the agricultural sector, totaling an expense of 1.637 billion m³ (29.3 percent of the total).

This distribution of consumption is in line with international trends. According to the UN Food and Agriculture Organization (FAO), most countries allocate between 60 and 80 percent of their water resources to the agricultural sector, especially food production. In 2020, the last year for which Cuba has published definitive statistics, the sector of “agriculture, livestock, forestry and fisheries” used 59.5 percent of the water served by the National Institute of Hydraulic Resources (INRH); four-fifths went to irrigation.

What is significant about the case is that this volume did not translate into increases in production, or that it at least equaled the volumes registered in the first half of the 2010s. Between 2016 and 2020, the production of root vegetables, citrus fruits, and of milk and beef, fell by 25 percent; that of fruits, 10 percent; and the pipeline, which came from the collapse of the times of the Álvaro Reinoso Task, was reduced by an additional 5 percent.

They are not the worst results, however. In recent years, the greatest decreases in harvests corresponded to those of beans and rice, which contracted by around 50 percent between 2018 and 2020. In 2021, the price “storm” derived from the Reorganization deepened the crisis even further.

The decreasing parabola of both crops was triggered by the lack of pesticides, fertilizers and fuel. Rice yields were 40 percent lower in 2020, from 4.38 to 2.62 tons per hectare (ha). In the new circumstances, the only alternative found by the Ministry of Agriculture (MINAG) was to continue planting large areas, even at the cost of the high water consumption (between 1.5 and 2.0 billion m³ per year) without reporting higher productions.

“You can plant over 26 hectares instead of 13 to compensate for the ‘product’ that you did not add to the rice when it was due, but in the end the sum total will not turn out as before. Land and water preparation also cost; now much more. That’s why so many people have stopped planting rice or are planting less,” said Israel, a farmer from the municipality of Florida.

The decisions of the Cuban State are guided by a logic that is difficult to understand. The money that is not used in domestic rice production is then spent on importing the grain at a higher price. Quoting Lázaro Díaz Rodríguez, the director of the Technological Division of Rice at MINAG, in a June 2020 Granma newspaper translated into concrete numbers the savings reported by harvesting the cereal on the island. While the international price of a ton was around 520 dollars, 319 were invested in planting it here. During the pandemic, a ton, which came to be priced at 650 dollars, never fell below 550 dollars. According to the FAO, in March its value was 600 dollars.

The cost of not seeking higher yields is also ecological. In 2015, the Agricultural Engineering Research Institute proposed updating the agricultural irrigation regulations, which the INRH had established in 1999. The new scale reserved the highest allocations for rice, only preceded by those corresponding to taro. But unlike the fields planted with this tuber, which in a very small proportion have irrigation systems, practically all the rice fields in Cuba are planted under the flooding method. In spring, one hectare of the cereal planted in the western provinces — where evaporation is less and rainfall is much higher — requires 10,415 cubic meters per hectare (m³/ha); and during the dry season, 11,286.

The amount of water that is used continues to be huge, without the results being up to what was achieved a few years ago. Specialists have been warning for some time against the tendency to compensate the lack of imported inputs with extensionism. A study published in 2018, authored by Professor José Antonio Díaz Duque, of the José Antonio Echeverría Technological University of Havana (CUJAE), set a weighty figure as background: in 2004, agricultural production in Cuba was 33 .8 million tons and 1.597 billion m³ of water were used for irrigation. Four years later, water consumption had risen to 3.281 billion m³ and agricultural production was 10 million tons lower.

Eight of the “foodstuff that are usually imported, show the impossibility of their realization at least because of the water requirements,” said Díaz Duque. Therefore, he recommended developing a “food security strategy similar to that of many countries that are characterized by limited availability of their water resources.” One of the main premises should be to reduce water consumption.

“Increasing planting areas is not the most appropriate strategy, but it is a way to alleviate low yields,” Vice President of the Republic Salvador Valdés Mesa countered in June 2020. His reasoning obviated that the extension of plantations demands more work, more seeds and, in many cases, more irrigation.

“When the land cannot be leveled properly due to lack of fuel, more water ends up being used. And there is also the additional cost of seed and the combines, which have to move more to cut the field. The savings that some think is made by not using fuel or fertilizer, in the end is ‘eaten up’ by the additional expenses that have to be made,” Israel explained.

Even at its best, Cuba’s rice yields were nowhere near the world average in terms of water consumption, which the FAO estimates between 1,000 and 3,000 liters per kilo of ready-to-eat cereal. In 2018, in the agricultural phase of production alone, the island used more than 5,000 liters per kilo, on average.

The drop in yields has deepened this difference, and there is not even the option of expanding the planting areas. For a long time, the island’s water resources have been exploited to the limit of their possibilities. A good example is the Cauto River, which leaves 90 percent of its average flow (estimated at 63 cubic meters per second) in the 19 dams and nine stations established along its course.

They are, in round numbers, about 1.3 billion m³ that each year have as their preferred destination the rice fields of Granma, the main producer of the cereal in Cuba. 150 kilometers to the west, the San Pedro River reaches the sea with less than 15 percent of its waters; the rest (260 million m³) remains in the reservoirs that sustain the large plantations in the south of Camagüey.

In 2016, the Climate Monitoring Group, attached to the Institute of Meteorology, estimated that each Cuban could use up to 1,214 m³ of water per year. Just in 1995 — with approximately the same population — the per capita was over 5,000; by 2025, forecasts suggest that availability will definitely approach 1,000 m³, one of the lowest rates in Latin America and the Caribbean.

These are data that mark a trend that is as worrying as it is difficult to reverse, due to the effects of climate change. Anyone who questions them only has to go to some of the hundreds of existing dams in Cuba, many of which, at the end of the dry season, seem doomed to disappear. If more effective formulas for water consumption are not found, some may do so.