The audiovisual material collects what was experienced by a group of independent Cuban filmmakers during the days of the Artes de Cuba Festival, an artistic exchange that took place at the Kennedy Cultural Center in 2018. 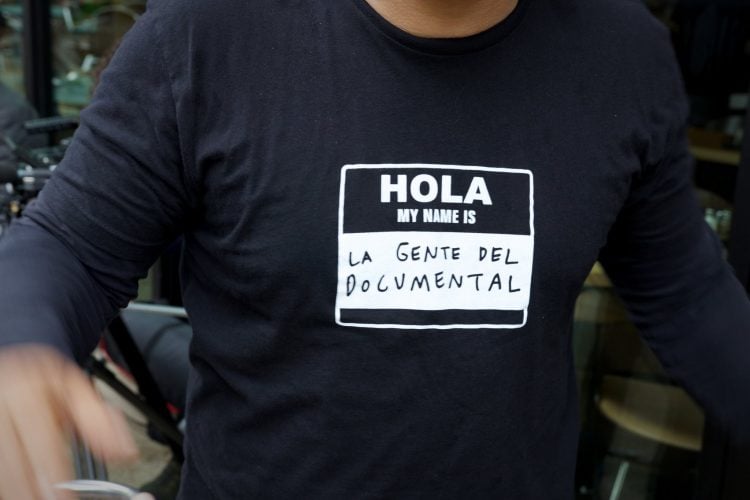 Four years ago, the news of the Artes de Cuba Festival at the Kennedy Cultural Center in Washington turned out to be quite an event, not only artistically, but also politically, since this cultural exchange between Cuban and American artists seemed impossible due to the complex political situation between the two countries during the Trump administration.

No matter what, it is complex to manage to separate politics from artistic work, but an event of great magnitude and relevance in the history of Cuba and the United States managed to take place, although setbacks were not lacking in the midst of this scenario.

Apart from the Cuban delegation, a group of independent filmmakers in charge of making an audiovisual material about the event, got the news of the denial of permission to film inside the place. It was time to reinvent or go home.

For a Cuban independent filmmaker, mishaps of this type are not strange. Dealing with refusals to film, the delay or absence of permits, as well as economic and resource limitations, are common tasks for those who decide to make films in Cuba without the protection of state institutions.

However, the outlook for Inti Herrera and Reymel Delgado, director and producer of the audiovisual, respectively, was worse as they found themselves in a foreign country and with financial resources running out by the day, a situation that Herrera describes as “a white moment. It is one of those moments where you have neither present nor past. Neither solution nor future.”

“So,” he adds, “it has to do with the spirit with which you approach the creative act. Normally you are using intuition. Nothing concrete or very easy to intellectualize yet. You know that you are looking for something and that there is a potential in that moment of reality that you grasp. Suddenly you don’t have access to that raw material to make your film. In our case also the financial fear. Initially we had no support, beyond the associations between ourselves and small amounts of money that meagerly helped support us when out of our homes, in a place that many of us visited for the first time.

“That feeling that there is no alternative helps you to be versatile, look for options and reconfigure hardships in pursuit of an end. Sometimes the team didn’t know it, but we didn’t have the budget to sustain us the following week. I think there is an attitude of coming from below, of coming up, which contributes to a certain epic in Cuban independent cinema. Sometimes even decadent, but epic after all.”

That is when they understand that beyond what happened in the place, the most important thing was close at hand: the artists, the people who made possible everything that could not be documented in images, all that human potential that led them to that point, people from here and there united carrying forward a dream.

Then they had (another) documentary. Through the guests they seek to delve into the complex history of Cuba-United States relations, and how, based on willpower and despite all obstacles, “art builds bridges between peoples, and reminds us that the forces that unite are deeper than those that divide,” recalls the dossier of La gente del documental, name of the film.

The task of understanding the link between art and politics is complicated. “The artist cannot be so naive as to not understand, not to have a political intuition, how good politics always carries an artistic halo. Nothing inherent to the human being can be alien to us. And at the same time, there is no artistic construction aspiring directly to a political result. Socialist realism gave good examples of this,” the director explains to OnCuba.

And he specifies: “These two concepts go hand in hand inevitably, but they have very different stages of gestation. Our film deals with this in a parallel way, although not directly aiming for a political result.”

In addition to the artists, historians, politicians and cultural agents of both countries offer a panorama of what was experienced at that time, in the midst of Donald Trump’s presidential term, a necessary context to raise awareness about the dimension of what happened in those days.

The names of Arturo O’Farril, Aymée Nuviola, Yissy García, Aldo López-Gavilán, José Parlá and Manuel Mendive are some of those we will be able to see in this film, together with the testimonies of other personalities such as Emilio Cueto, art collector and Cuban researcher; Carlos Gutiérrez, secretary of commerce of the United States between 2005 and 2009; and Emily Mendrala, former executive director of the Center for Democracy in the Americas, currently Deputy Assistant Secretary in the Bureau of Western Hemisphere Affairs, United States Department of State.

The film, in co-production between i4films, FacFilms, Wajiros Films and La Rueda Films, will premiere at the Charles Chaplin cinema on May 5 at 6:00 p.m., and will be an example to internalize how difficult it is to make independent cinema in Cuba, although Inti remains somewhat reserved about it:

“It is very difficult to theorize about how a work will be viewed in the future. I like to see the degree of communication that a film achieves with its audience. If it connects, if your concerns and the aesthetic proposals that you have been able to bring to the theater, or to any screen, make sense to others,” are some of the questions that will be answered after its brief stint in movie theaters, because for now It will only be on the billboard in Room 1 of the Multicine Infanta, from May 6 to 8, at 5:00 p.m.

This documentary was also one of the winning materials in the first edition of the Fund for the Promotion of Cuban Cinema, and one of the first to be released in movie thaters in the country, another point in favor of the necessary dialogue that should be fostered between independent filmmakers and the Cuban Institute of Cinema Art and Film (ICAIC).

“I think that Cuban independent cinema will have to be written about. Perhaps in a time of less tension, where the political is not the initial aspiration but rather based on the sociology of art, on aesthetics and above all based on the anecdotal because I imagine, based on my experiences, that it can be a good book, all the incidents that a Cuban filmmaker goes through to make his film. But it’s time to put distance in between. In short, having earned their bread, the Greeks began to rethink themselves. First things first,” Herrera tells us.

“I would like the message to convince, not because it is the only alternative, but because it is part of the path of virtue, of what is human. It is very necessary for our country that we can see a horizon where people decide to bet on it. Beyond if physically one lives here or there. There must be a common language, a basic understanding that helps us move forward. The important thing is, to paraphrase one of the interviewees: ‘put yourself in the other’s shoes,’ the rest is very easy.”