How are retail prices in Cuba constituted and controlled with the monetary reorganization? How much do medicines cost today? 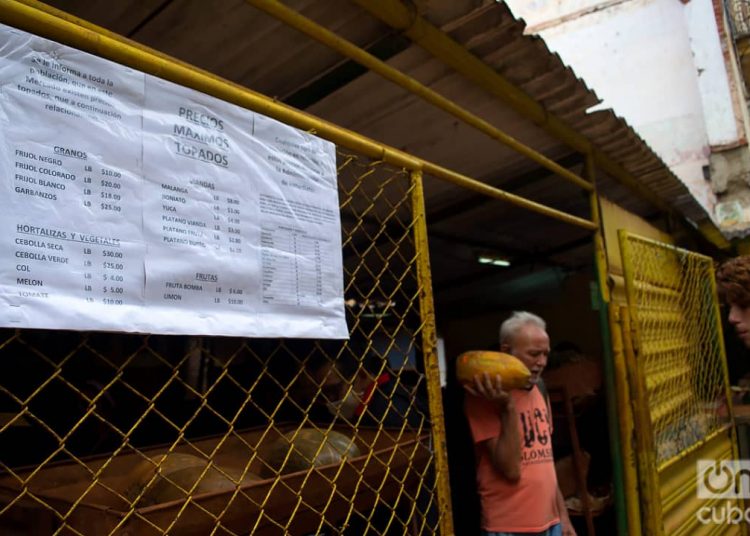 A man leaves an agricultural market in Havana with his purchases. In the foreground, the list of prices “capped” by the government. Photo: Otmaro Rodríguez.

The problem with the prices didn’t begin in Cuba with the monetary reorganization. That, Cubans know well, is practically a truism on the island, a reality that has long been daily, fueled by the chronic economic crisis that, with its advances and relapses, the country has dragged for decades.

In fact, that economic crisis—multiplied in recent years by the tightening of the U.S. embargo, the crisis of a key ally such as Venezuela, the persistent internal inefficiency and, as if that weren’t enough, the emergence of the COVID-19 pandemic— have shot up the prices on many occasions, especially on the black market, but also in formal circuits such as agricultural markets. In response, the authorities have imposed “caps” (maximum limits) and control and punishment mechanisms on offenders that, beyond good intentions, have often proven not to be effective enough in a scenario spurred by scarcity.

Now, with the reorganization already in place, the government continues to use this type of measures―although the caps not infrequently translate into empty platforms―, while appealing to the population to play an active role in confronting “abusive and speculative prices” and so that the policies drawn up “are correctly implemented.” And a part of Cubans, in the midst of the crossfire of the increase in state prices―in whose conformation the state itself is judge and party―and non-state prices, including informal ones, have responded to that call.

According to authorities from the Ministry of Finance and Prices, in the first two weeks of January, around 500 communications and 78 direct complaints related to violations of the established prices were received in that body. Lourdes Rodríguez, deputy minister of the sector, explained that most of the infractions detected have been in agricultural products and gastronomic services, while 65% of these violations correspond to forms of non-state management and the rest to state entities. Violators are imposed high fines—between 5,000 and 15,000 pesos (CUP), according to a recent decree approved by the government—as well as the seizure and forced sale of the products, the total closure of the establishment and the loss of the license in the case of private workers.

The current state regulation on the subject, which updates the existing norms in the face of the monetary reorganization, considers as abusive prices “those whose growth is above a reasonable range compared to similar products or within the same family,” and that “seek to achieve a level of disproportionate benefit or profit.” Meanwhile, it defines as speculative prices “those fixed to products, mainly basic needs products, higher than those established by the competent authority, linked to repurchase, resale or both, with the aim of obtaining profits.”

Well, how are these prices defined and what is the competent authority to establish them? Explaining the logics and state mechanisms for this would be equivalent to writing a treaty, and showing all the official lists would be extremely long and cumbersome, due to those logics and mechanisms. As we have already mentioned in the previous installments of this series, in many prices the existing state subsidies until December were totally or partially eliminated, while others remained protected due to their impact or social sensitivity. Furthermore, a group of them were formed centrally, while others are the responsibility of local authorities and organizations, among them those of gastronomy and social services such as the family care system, which have brought so much controversy due to their high amounts.

In a general sense, according to Resolution 329 of 2020 of the Ministry of Finance and Prices―published in the Gaceta Oficial No. 70 Extraordinary of December 10, 2020, and which establishes the “treatment to be applied by entities to decentralized retail prices in Cuban pesos, from when the monetary reorganization of decreed”―, “retail prices are a continuity of the wholesale ones, so that they cover the necessary costs and expenses, a profit, fiscal commitments and do not generate a subsidy, except in cases where different treatments have been approved.” In addition, “for their determination, the related prices and rates existing in the market are also taken into account” and “the technological norms for the different activities are considered, as well as the references for similar ones from other forms of non-state management.”

The resolution also establishes that “retail prices and rates are differentiated according to their characteristics, units of measure, attributes, quality, modalities, benefits, commercial requirements and the adequate quality-price correlation”—an aspect that generates constant complaints from Cubans, as has happened, for example, with state bread and pizzas, and about which the authorities have returned time and again, without significant changes being seen at the moment—and that “the rates do not include the prices of the parts, pieces and accessories, which are charged independently.” The prices of the monetary reorganization then officially go down this road.

What about the medicines?

As sensitive for people as food and basic services, medicines have been a constant topic of conversation among Cubans since the expected prices for many of them were disclosed as part of the reorganization. So much so that the authorities did not take long to rectify the initial list, lowering some prices and updating the basic table, with the exclusion or elimination of medicines that would no longer be marketed in Cuban pharmacies.

In general, the drugs were divided into three groups: controlled ones—those commonly known in Cuba as “by the card,” about 85 that are dispensed in pharmacies—, those complementary to controlled ones (77) and those not controlled or complementary (191), whose current prices were published in the Gaceta Oficial No. 81 Extraordinary of December 29, 2020.

The first group, mainly for the treatment of chronic diseases, and the second, complementary to those of the first, maintain their prices prior to 2021 as they are still subsidized by the State. However, according to the authorities, their real value did increase with the elimination of the exchange distortions existing on the island until December.

“These products have the effect of a devaluation of the currency, especially when the imported raw material has a high composition in its production, or when we need to directly import the product,” explained Minister Meisi Bolaños, who affirmed that the state budget assumes that increase, as well as that of natural medicine products and other pharmaceutical items—such as colostomy bags, tubes, syringes, glucometers, cotton, sanitary pads and condoms—which also maintained their prices.

MEDICINES THAT COMPLEMENT THE CONTROLLED ONES (Selection)

Regarding non-controlled or complementary drugs, they include those used mostly to treat acute processes, in short periods of time, such as antibiotics, antiparasitics and analgesics. These are no longer subsidized by the state and, consequently, their prices increased, although this increase is nuanced by whether they are manufactured in the country or not, and by how many imported components are used in their production, in the case of those manufactured on the island.

However, the Cuban authorities have said that in the case of medicines, as in those of other products, prices could vary according to the circumstances “to search stability and that the economic expression of the real costs and the real economy be expressed in all products, in consumption and the development of the different sectors.”  Therefore, they affirm, these prices could be reviewed and updated, while at the same time aspiring to increase national production—which would make drugs cheaper and reduce the burden on the state budget—and also to subsidize people who cannot afford them and not the products themselves.

In any case, an unavoidable problem with medicines, as with food and other basic needs, is their instability in the state network—even when the authorities insist that they are working to resolve this issue—, which affects not only the health of the sick but also their pockets and those of their families. Because in the face of scarcity, the black market always appears—which feeds on the misnamed “diversion of resources” or on informal importation from abroad—with prices that are often stratospheric and inaccessible for the majority of Cubans, under the implacable law so common in Cuba that “he who sells, commands.” And under that law, there is no reorganization, no matter how reorganized it aims to be, that will make ends meet.