For the third consecutive day, four deaths and 821 confirmed cases were reported during the day, as highlighted by the MINSAP in its daily report. 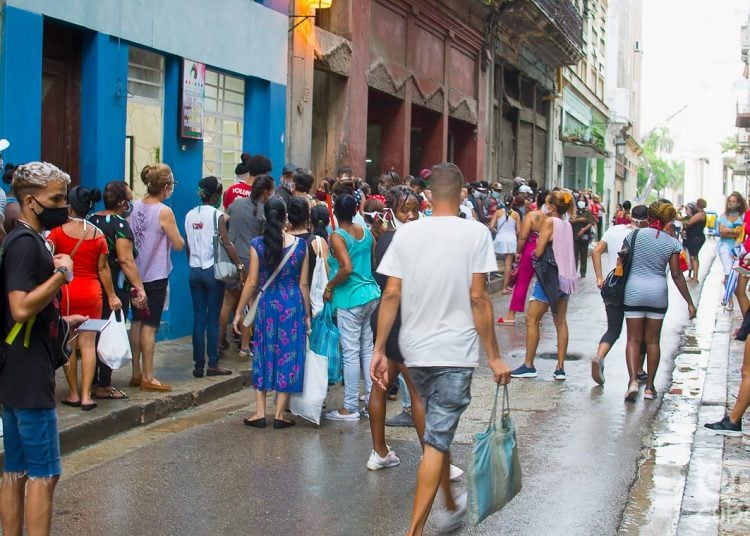 People in a queue in Havana, during the outbreak of coronavirus. Photo: Otmaro Rodríguez.

With 821 confirmed cases at the end of February 5, Cuba reports 4,419 patients positive for COVID-19 in the first days of the shortest month of the year.

The figure was known during the usual daily report of the Ministry of Public Health (MINSAP), in which the death of four people was lamented for the third consecutive day. On this occasion, two 81-year-old women from Havana and two men: one 55, also from Havana, and a 78-year-old from Santiago de Cuba.

The new cases were confirmed after 17,500 PCR tests were processed during the day, in which 675 medical discharges were reported.

Of the 821 patients, 785 were autochthonous and 738 contacts of confirmed cases, 36 with a source of infection abroad and 58 related to international travelers.

By territories, Havana (377), Santiago de Cuba (153) and Guantánamo (67) report the majority of patients from the 15 provinces that reported cases today.

Of the 36 SARS-CoV-2 positive cases infected outside the Island, 22 arrived from the United States, with a total of 10 infected foreigners.

Dr. Francisco Durán also reported that of the total cases, 422 were women and 399 men, while 436 were asymptomatic. The epidemiology specialist highlighted that 102 children under 20 years of age were positive for COVID-19, 83 of them under 18 years of age, for a total of 651 confirmed active pediatric patients.

It was also known that 62 patients are in intensive care (32 critical and 30 serious), a high figure according to Durán, who reported that 14,777 are admitted to medical facilities, 3,106 suspects, 5,986 are under surveillance, with 5,685 active cases throughout the country.