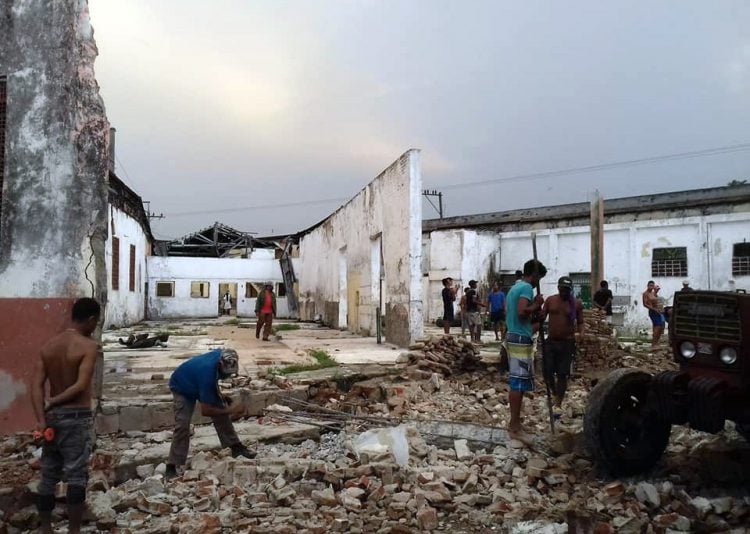 Damage caused by a tornado in the city of Palma Soriano, in eastern Cuba, on June 28, 2020. Photo: Radio Baraguá / Facebook.

A collapsed home and several damages to homes is the preliminary balance of a tornado that occurred this Sunday in the city of Palma Soriano, in eastern Cuba. The damages occurred in the former Mario Maceo Quesada wine factory and its surroundings, the local media reported.

The factory, currently in disuse, lost one of its side walls while at least nine homes were affected, according to the report by the Tele Turquino telecentre in Santiago de Cuba. The damages were mainly to ceilings and walls, and there were no fatal victims, according to the Radio Baraguá station on its Facebook profile.

We share these photos from the profile of journalist Yunis Abich Chang. This Sunday afternoon Palma Soriano….

Testimonies cited by Tele Turquino and other media tell of the speed of the evolution and force of the meteorological event, in the form of a waterspout or spiral. After its passage, the neighbors turned out in the streets to check and clean the damage caused, while local and municipal authorities visited the affected people, according to press reports.

As a result of the damage, two people were evacuated to relatives’ homes and six will be temporarily placed in a state center.

In recent months, coinciding with the coronavirus epidemic, Cuba has been the scene of several local tornadoes and storms that have caused material damage in different areas of the island. Among the affected towns are La Mangas and Guanajay, in Artemisa; Vertientes and Florida, in Camagüey; Caibarién, in Villa Clara; and Maisí, in Guantánamo.

In addition, heavy rains caused floods and collapsed housing in late May in central Cuba, especially in Sancti Spíritus, Villa Clara and Cienfuegos, where storms were also reported. This meteorological situation was related to a strong trough in the upper atmosphere of southeastern Mexico that caused abundant humidity, strong winds, and atmospheric instability in a great deal of Cuba.

Cuba with one infection by COVID-19 today, there were no deaths