Traditional March of the Torches to take place only in Havana

The press did not specify the reasons why the march, which will pay tribute to José Martí on the 167th anniversary of his birth, will not take place in other Cuban cities. 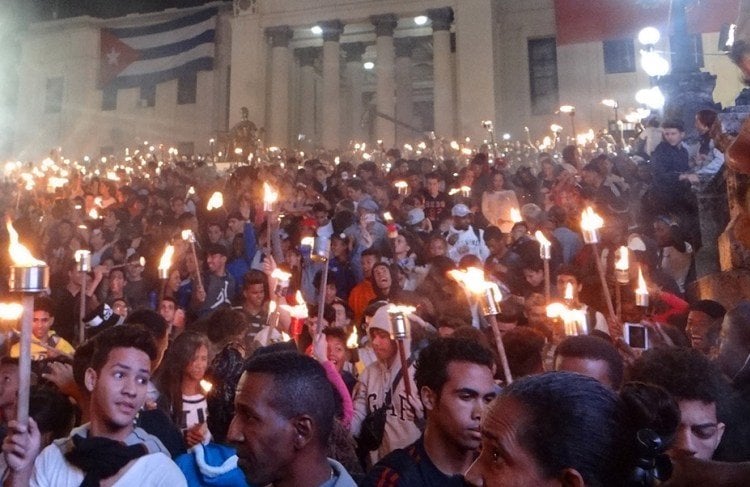 March of the Torches leaving from the steps of the University of Havana. Photo: uci.cu / Archive.

The traditional March of the Torches, which every year pays tribute to Cuban National Hero José Martí, this year will only be held in Havana, according to reports from the official Cuban press.

The march, which is convened by the Federation of University Student (FEU), will take place on the night of next Monday, January 27―on the eve of the birth of the Cuban hero―and, as usual, its route in the island’s capital will start from the steps of the University of Havana and will end in the so-called Fragua Martiana, where the quarries were located in which the young Martí served a sentence of forced labor because of his opposition to the Spanish colonial regime.

But unlike what happened in previous editions, the parallel marches that are held in other parts of the country this time will not take place. This was confirmed by José Ángel Fernández, president of the FEU, who assured that, nevertheless, “All of Cuba will be marching with us (the Havana marchers),” according to statements cited by the Agencia Cubana de Noticias (ACN) news agency.

The press report does not specify the reason for this decision.

The March of the Torches had its origin in 1953, when young Cuban university students, among whom was the then lawyer Fidel Castro, organized it for the first time in Havana to commemorate the centenary of the birth of José Martí, less than a year after Fulgencio Batista’s coup d’état.

Years later, with the triumph of the Cuban Revolution, the marches were again convened, this time under official protection and not only to pay homage to Martí but also to support the government and reject U.S. measures against the island. It was in this context that they spread throughout Cuba.

Last year, the March of the Torches―named because the participants parade carrying torches―was controversial, because it took place despite the devastating tornado that affected several municipalities in the Cuban capital at that time. Its celebration was criticized at the time in social networks by those who considered that it should be suspended in solidarity with the victims and argued that the resources used in it could be used for recovery, while the government and the official organizations defended its holding.

This 2020, the march has as context the complex economic situation the island is going through, aggravated by the recent Trump administration’s sanctions that have affected the arrival of fuel to the country, as well as key sectors such as tourism.

In addition, it will occur after the recent desecration of José Martí busts―on which pig’s blood was thrown―by alleged members of the opposition organization called Clandestinos, for which several people were already arrested, who confessed their authorship, and which have led to official acts of reparation to the Cuban hero throughout the island.

Cuban resident in Miami accused of threatening to kill gays, Afro-Americans and Latinos