In the past five years, the Arab country has sent 12 million dollars’ worth of aid to Cuba, while during the coronavirus crisis it has delivered more than 700 tons of supplies to some 62 countries. 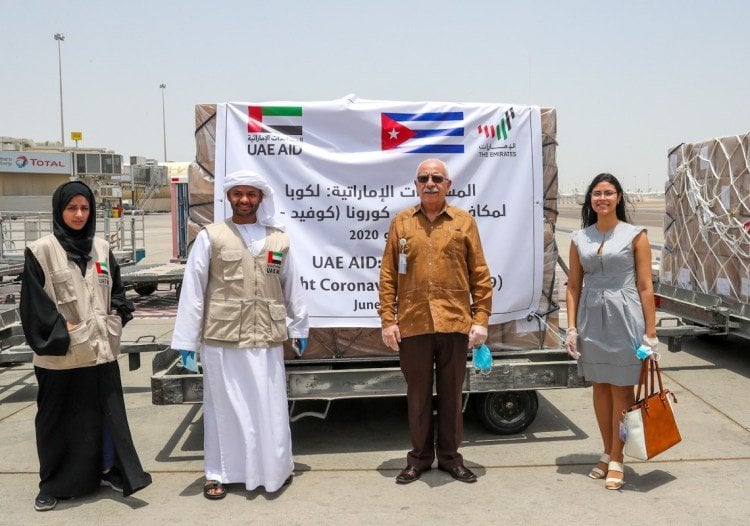 The government of the United Arab Emirates (UAE) sent an airplane with eight tons of medical supplies to Cuba this Thursday, to help the task of doctors and health personnel against the coronavirus pandemic.

“By sending aid, the UAE authorities are sending a message of support and solidarity with Cuba and its front-line workers, many of whom have volunteered to fight the virus in other countries,” said the Emirati ambassador in Havana, Bader Abdulla Saeed Almatroshi.

In statements reported by the official Emirati WAM news agency, the diplomat applauded the “courage and determination” of these medical professionals.

#UAE sent an aid plane containing almost 8 metric tons of #medical supplies to #Cuba to bolster the country’s efforts to limit the spread of #COVID_19, which will assist approximately 8,000 healthcare workers#UAEAid pic.twitter.com/C5vDJ2In26

In the past five years, the Arab country has sent 12 million dollars’ worth of aid to Cuba, while during the coronavirus crisis it has delivered more than 700 tons of supplies to some 62 countries, according to WAM.

According to the latest data from the World Health Organization, Cuba has so far registered 2,092 cases of coronavirus and 83 deaths, well below the 35,788 infections and 269 deaths recorded in the Emirates.

The Cuban government has consistently denounced the difficulties caused by the U.S. “blockade” for the arrival of aid and donations sent by third countries, companies and individuals.

For its part, Washington maintains that the embargo does not prohibit Cuba from buying medical supplies and materials, although in practice these transactions require numerous administrative permits that make companies desist from selling to the island.

The United Arab Emirates and Cuba established diplomatic relations in 2002, but it was not until 2015 that the Arab country opened its embassy in Havana, and the island reciprocated in 2018 with the opening of its diplomatic headquarters in Abu Dhabi.