The baby was diagnosed with a teratoma that was compressing vital structures such as the heart, airways, and large blood vessels located in the center of the chest. 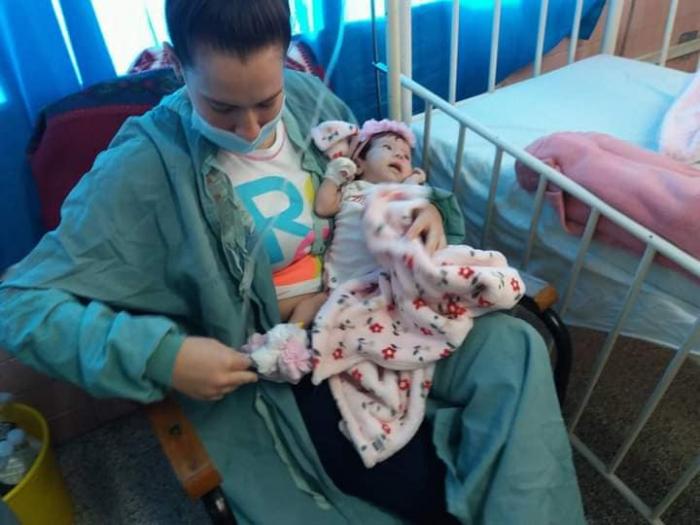 The Cuban baby Annalie Torna Marrero, in the arms of her mother, after the complex operation that saved her life. Photo: Granma.

A girl barely 49 days old was able to survive after a complicated surgical intervention never before performed in Cuba, and she is recovering satisfactorily, according to official media on the island.

The event recently occurred at the José Luis Miranda Children’s Hospital, in the capital city of the central province of Villa Clara, where Lisyanet Marrero Pérez took her daughter Annalie Torna Marrero with suspected COVID-19 infection.

The baby, however, was diagnosed with a teratoma that compressed vital structures such as the heart, the respiratory tract and the large blood vessels located in the center of the chest, according to a report published on the Cubadebate website.

According to the media, the baby’s grandfather had been infected with the SARS-CoV-2 virus, and the baby had a mild cold, so the family decided to verify a possible contagion.

“One of our doctors discovered that the girl was not breathing normally, so we proceeded to perform a chest X-ray. There we discovered an important mediastinal widening that had nothing to do with COVID-19,” Dr. Jesús Sánchez Pérez, director of the hospital center in the city of Santa Clara, told Cubadebate.

According to the media the result of the baby’s PCR was negative, but the doctors wasted no time and performed an echocardiogram and an ultrasound to delve into that strange image right in the middle of her chest.

Dr. Abel Armenteros, neonatal surgeon and head of that service in the central region of Cuba, summed up the diagnosis for Cubadebate: “A benign tumor that, due to the compression it carried out on vital organs, behaved as malignant.”

The report specifies that in the middle of the studies to which she was subjected, Annalie suffered a cardiac arrest, so decisions had to be speeded up while the patient was sedated and connected to an artificial respirator.

The director of the Villa Clara hospital explained that since it is an infrequent phenomenon in neonatal patients, there were no reports in Cuba of a surgical procedure like the one Annalie needed, and that after consulting the National Pediatric Intensive Care Group, and with the coordination of the Maternal-Child Program, it was established that it was very risky to move the patient to the country’s capital.

The final decision was to reinforce the surgical team of the aforementioned hospital, and two specialists from the William Soler National Pediatric Cardiology and Cardiosurgery Center in Havana were transferred there, including its director, Dr. Eugenio Selman-Housein.

Dr. Armenteros, head of the extensive team that undertook the complex surgery, commented that it lasted an hour and a half, and that when they accessed the tumor, they verified that the mass had already displaced the heart and compromised other vital structures. “If we had not found this mass, it would have been a cause of sudden death in a very short time,” said the doctor.

According to what was published by the official media, the baby passed the postoperative process without complications and given her good recovery she no longer needs treatment with antibiotics, so it is highly likely that she will be discharged very soon and can return home.