The singer premiered this Friday her new album “Sin salsa no hay paraíso.” 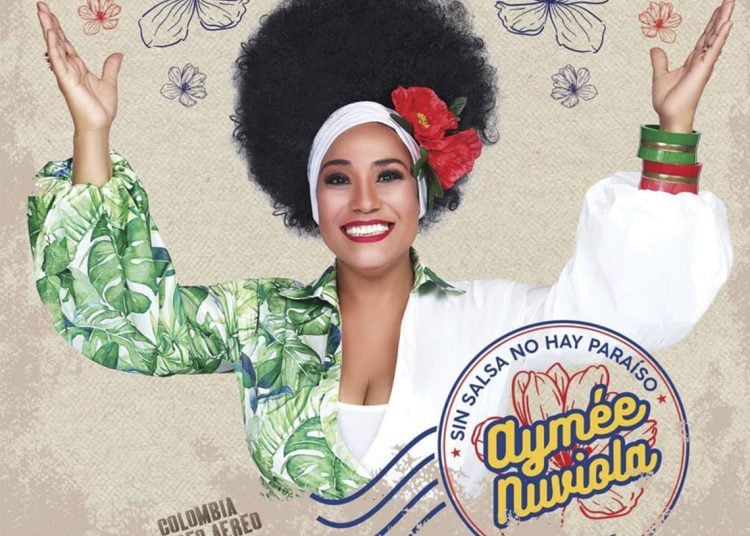 Aymée Nuviola does not stop with the joy from obtaining, last year, a Grammy from the American Academy for her album A Journey Through Cuban Music. She won the award in the same category as she saw Celia Cruz and Gloria Estefan, two other women-symbols of Cuban music, win two years ago.

Aymée, based in Miami, does not rest in the search for her own truth and transcendence. She does it through the projects she has embodied even during this pandemic, of which she also felt the ravages in her own body. She recovered from the coronavirus with her husband, producer Paulo Simeon, to continue creating and occupying a privileged place in the island’s music.

In 2020 Aymée Nuviola won a Grammy in the category of Best Tropical Album along with Marc Anthony, who was on the list with his album Opus. Nuviola made no secret of her surprise when she was named as a winner at the historic awards ceremony. Upon reaching the stage, she only managed to say: “Oh my God!” “I am here representing Cuba’s music. It’s a great honor for me.”

Nuviola has engraved that memory in her memory. She assures me from her apartment, where she has just returned after an arduous day dedicated to her projects, accompanied by her husband and her producer. Paulo apologizes for being late for our conversation, while Aymée talks about the eventfulness of the day. Paulo shows me some photos of Aymée’s recent presentation at the Ellas y su Música event organized by the Univisión television network and the Latin Grammys, which paid tribute to Celia Cruz and Gloria Estefan. Aymée praised Estefan not only for her relevant career (she was one of the forerunners of the so-called New Sound of Miami), but also her will.

“For me it was a pride and a privilege to share the bill with Gloria Estefan. She is an example of discipline, of discretion. She is a woman that everyone respects. She suffered an accident that practically disabled her and with willpower she retook her life and sang again. The truth is that she very much deserved that tribute,” says Aymée. “What we are both doing is raising the name of our country.”

During the organization of the International Jazz Plaza Festival in 2020, her participation was announced along with that of pianist Gonzalo Rubalcaba in the opening of the event, with the premiere on the island of the album Viento y tiempo. Live at Blue Note Tokyo. They recorded this album together and have already presented it on different international stages. They could not defend the album in Cuba during the scheduled date, but they do not stop evaluating the possibility of doing so.

“We would like to reach the whole world with Viento y tiempo. We have proposals even for South Korea. In the case of Cuba, doing so does not depend solely on our intentions. There are other characteristics and conditions there,” explains Aymée.

“This album has been thought out to the last detail. From the beginning it has had the support of the same musicians on stage, something that the artists have not considered changing due to the negative effect this could have when interpreting the songs live. It is difficult to go to Cuba also because you have to bring musicians from the United States. In the project we are very jealous about always having the same musicians. It is not a project with which you can go anywhere and share with other musicians. There is a whole series of things that become complications and that get out of hand.”

Aymée and Paulo respond resolutely when I ask them if they could bring the album to Cuba if all the conditions were guaranteed. “Viento y tiempo is going to go to Cuba at some point. Let’s hope that the conditions of the pandemic improve, and the human ones, to take it. It is a duty to present it to the Cuban public,” says Paulo. Aymée reaffirms his words while she asks me about the situation on the island and the various conflicts of the national reality, to which she has always been very attentive.

“Gonzalo, for example, is signed with Bosendorfer, a brand that is part of the Living Legend program. It was difficult to find a way to transfer to Havana that specific piano that he required,” says Paulo.

Viento y tiempo… was recorded live during the performances of both musicians in 2019 at the legendary Blue Note Club in Tokyo, Japan. The album, which will be part of a trilogy, moves between Cuban music and jazz and includes representative themes from the island’s repertoire. It came out under the Top Stop Music label and the music was produced by Gregory Elias and Gonzalo Rubalcaba; the general production was carried out by Top Stop Music, Paulo Simeon and María González, Rubalcaba’s wife. 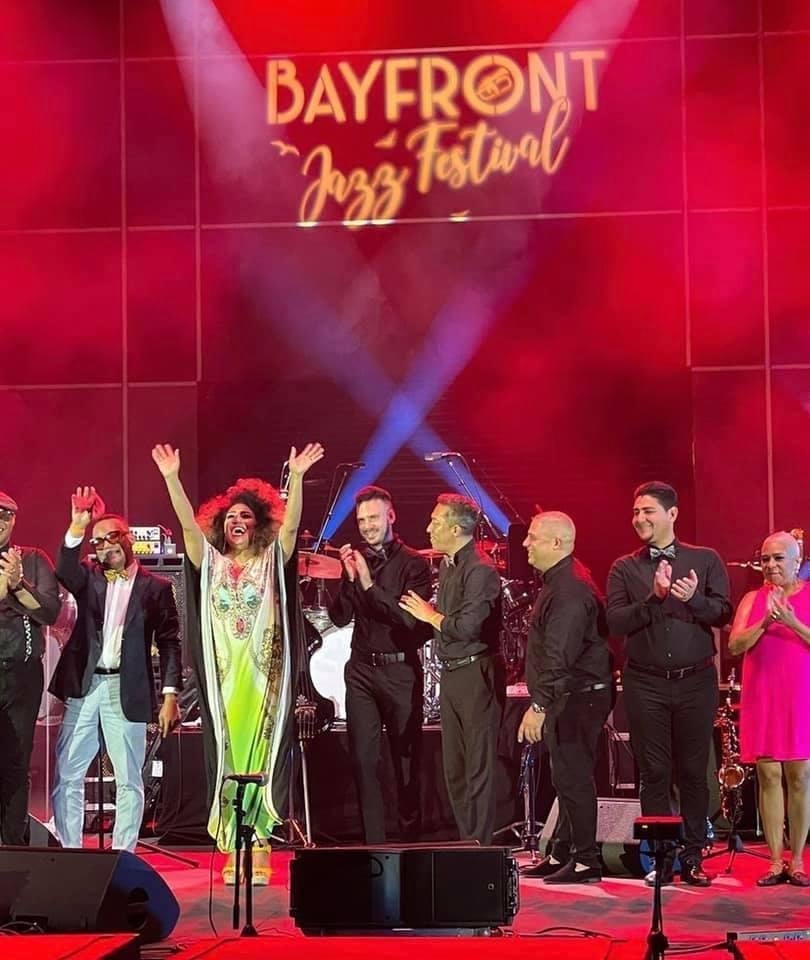 The musicians gave the finishing touches to the album during the peak period of the pandemic. Aymée gratefully remembers that Gonzalo received them for that recording process that often ended in a peaceful family atmosphere. “We value very much that Gonzalo and María opened the doors of their home to us because not everyone is willing to do so during a pandemic. It is a risk that they were taking and luckily they never got infected. They did it with deep faith, just like us. Not only was it like this with the recordings, but later we stayed as a family, sharing, talking, reflecting on what was happening. Those moments also helped us to realize that human beings are not prepared to experience this type of confinement,” reflects Aymée.

Aymée has a deep connection to Latin American music. She has demonstrated this in different trips and projects that have led her to know first-hand various cultures of the region and artists with very different proposals from each other, but anchored in the recognition of the common features of their identity. That is why she participated in the recording of the album Ancestras, in tribute to the Afro-Colombian singer Petrona Martínez, one of the most authentic voices of the culture of that country.

She shared the album with musical legends such as the Peruvian Susana Baca and the African from Benin, Angélique Kidjo. On the phonogram, she sang “Dolores tiene un piano,” one of the classics of Colombian music.

She doesn’t talk about that album as just another project. She gives strength to her words and for her it has an important creative and spiritual meaning. The singer has shared her artistic and personal interests on various fronts in the recording and music scene. This Friday she released a new album with salsa version songs that were popularized in Colombia. It’s Sin salsa no hay paraíso and it includes songs by Jorge Luis Piloto, Amaury Gutiérrez, Polo Montañez, among others.

“The songs were popularized by Colombian singers like Carlos Vives, whose songs I also have on the album. We made the salsa versions of them. I like the result. We have Fanny Lu, Majida Issa, Maia and Paola Arena. I have published singles with the Septeto Carey, of a song that I recorded with Jorge Luis Piloto. I had released other singles with José Aguirre, musical director of the group Niche,” she explains and remembers her participation in a record by the well-known Puerto Rican musician.

“He did a very good job with the Big Band on a duet album called Gente con alma, with musicians like Diego el Cigala, Gilberto Santa Rosa. On that album I sang with my sister Lourdes.” Aymée is also not indifferent to the context of criticism and offenses that marks on social networks a part of the links of Cubans living in different countries. She herself has received offenses by posting comments on her Facebook profile. The singer attributes the tensions, among other factors, to “misunderstandings” and “wounds.”

“Cubans in general always embrace controversy because it is part of our daily life and our character. When we’re talking, people who are not Cuban think we are killing ourselves. And it is not like that. This is reflected in social networks also in terms of the discussion on political and religious issues. There is a lot of susceptibility and wounds on one side and the other. There is a lot of misunderstanding. People never want to go to the middle terms, but to the extremes. That is one of the reasons why I often refrain from making any kind of comment about the social or political reality of Cuba. What I post on the networks is not to satisfy anyone. I do it for the same purpose that I make music: to heal myself, to let off steam, to express something that I really feel in my heart, to keep being authentic, not out of fashion.”

With her comments on networks, she seeks the same thing as with music: “It is about creating links, bridges, scenarios of understanding among Cubans.” “Cubans in exile are attentive to how to help their family, their friends. Right now in Cuba there are no medicines and it is very difficult to send them from abroad. Everything adds up and people get exhausted and explode. And when you look to the other shore there is a similar scenario and some are offended by the expressions of Cubans from Florida. It is a fight of contrasts and positions. You try to understand that as much as possible because in the end we are all the same. I want to create ways to help us, understand us, create lights,” says Aymée.

The singer tells me about her friends in Cuba and her followers. She would like, she says, to have millions of Cubans living on the island close to her career. And she assures that when she can, she will again bring her music to Cuba, to also show that “without salsa there is no paradise.”