With the recovery from the pandemic, not yet complete, the emblematic street returns to its undertakings. 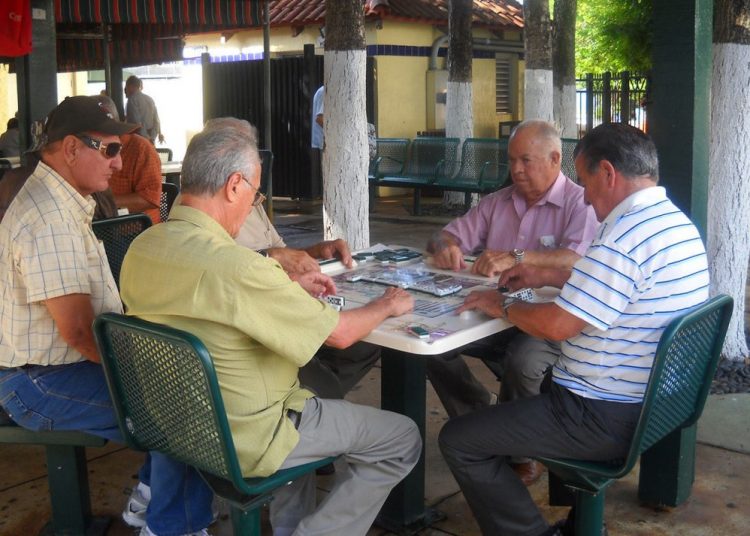 One of the game tables in the park. | Photo: Miami-Dade County.

At the beginning of the week “the light” returned to Calle Ocho. After an almost total year-long closure due to the pandemic, many healthy entertainment establishments had to fire everyone and close their doors. Even the historic Domino Park was closed, leaving several old men without a place to socialize.

But things are getting back to normal. The Domino Park is perhaps the most popular space on the emblematic street.

Last Monday, the Miami mayor’s office decided to reopen it in an act that sounded something like a starting shot at an Olympiad with hundreds of people in attendance. All smiling, happy and rejuvenated. Some as if they were there for the first time.

It was a starting shot because that ceremony led to the reopening of the establishments of many restaurants, bars, record stores and souvenir shops, the odd art gallery, barber shop or the only “typical” Cuban grocery store that, curiously, has a transparent plastic bag hanging at the entrance with a sign that says “to sell” two invisible little fish from the North Pole.

The reopening of the Domino Park, less known by its official name of Máximo Gómez Park, normally receives dozens of players a day. Most are faithful to the place on a daily basis since the last century, when the city opened it in 1976 at a cost of $116,000.

Atilio Gómez, 67, arrived in Miami around that time and a cousin took him to see the park. Since then he doesn’t want anything else. Decades later he proudly says that he met all of his “real” friends in the park. “We’ve spent many hours together and we talk about everything. Besides, women never come and we feel better that way,” he explains with a jocular look on his face.

When he found out that the park was going to reopen, Atilio did not hesitate: he canceled a lunch at his daughter’s house and went there. The hubbub he created upon meeting the buddies again is difficult to describe. Hugs, effusive of course, questions about what everyone did this year and questions about vaccination. He felt better when he learned that everyone is vaccinated. He was glad that no acquaintances died from the coronavirus and, very importantly, reminded everyone who was winning in the improvised domino championship they were playing before closing. It was him. Those championships are not about money, the park rules impose it but, he admits, they put something on the table as an incentive: some discreet beans that each equal a beer.

In front of the park there is a musical center called Cuba Ocho. It is a mixture of an art gallery, a concert café or a literary club. In 2016, when former President Barack Obama went to Havana, someone hung a portrait of him on the wall hugging a Cuban flag. An interesting gesture. Because in the heart of Little Havana, where criticism of the thaw was felt, no one seemed shocked by the image.

I remember the words of a regular customer in those days: “these are other times.” And in a way they still are. The reopening of Calle Ocho is, without a doubt, a palpable image of the rebirth of a city. Because the street is, perhaps, the only space in Miami that concentrates an example of a society that will not die, although removed from its roots.

Cultural Fridays have finally made their comeback, when galleries bring their artists out onto the streets; restaurants and bars hire musicians and singers. And people manage to stop the traffic because they take their partners out to dance in the middle of the street. “I hadn’t danced since the coronavirus,” said Yanelis. Now “we are going to dance forever. Calle Ocho has defeated this shit.” It seems it’s like this, since last Monday night it is almost impossible to find a parking space.

“Azúcar!” many shout. And Celia plays in the background.