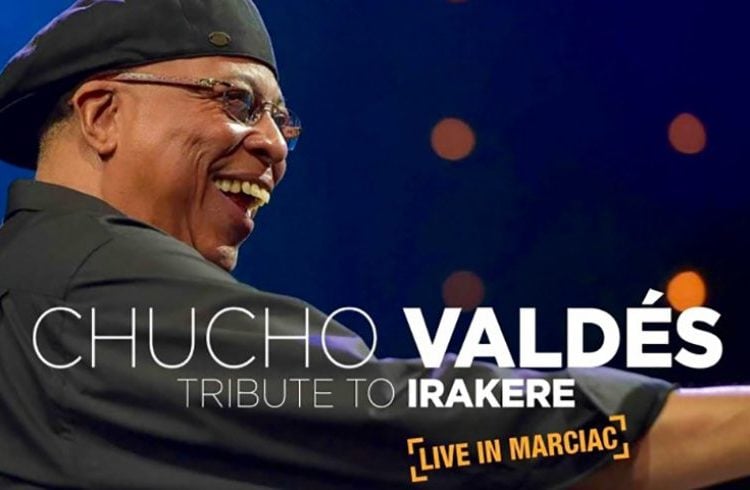 Cover of Tribute to Irakere: Live in Marciac, by Chucho Valdés.

Cuban pianist and composer Chucho Valdés has a new Grammy to his name. This Sunday, his CD Tribute to Irakere: Live in Marciac was the award winner as the Best Latin Jazz Album in the 59th edition of these awards, held in the Staples Center of Los Angeles, California.

The CD was recorded in 2016 during the Jazz Festival in Marciac, France, together with his current group, the Afro Cuban Messengers.

For the CD the artist recorded with his new musicians original scores of the legendary Irakere group, of which he was one of the founders.

With this award, Chucho – born in Quivicán in 1941 and considered the most prominent figure of the history of jazz in Cuba – won the sixth Grammy of his career, plus three Latin Grammys and other important international awards.

When receiving it, the jazz musician thanked the American Academy and the Marciac Festival, as well as the original members and the rest of the musicians who passed through Irakere.

Officially founded in 1973, the group stood out for its work in Latin jazz and the combination of electronic music and the island’s popular and folklore music. In addition to Valdés, his musicians, applauded for their instrumental dominion and their power of improvisation, included relevant artists like saxophonist Paquito D’Rivera, trumpet player Arturo Sandoval, guitarist Carlos Emilio Morales and drummer Enrique Pla.

Son of the great pianist Bebo Valdés and professor and singer Pilar Rodríguez, Chucho was worthy of the Grammy over records of renowned artistic production. They were Entre colegas, by New Yorker Andy González; Canto América, by Michael Spiro, Wayne Wallace and La Orquesta Sinfonietta; Madera Latino, by trumpet player Brian Lynch and his guests; and 30, by the Brazilian Trio Do Paz.

Although they did not win an award, Cuba’s Los Van Van were also nominated with their record La Fantasía. Homenaje a Juan Formell in the category of Best Tropical Latin Album. Deceased Puerto Rican musician José Lugo and his Guasábara Combo won the award with the record ¿Dónde están?

The big winner of the night was British singer Adele, who won in the five categories in which she was nominated, among then the Record of the Year, Song of the Year and Album of the Year.

Meanwhile, the late British rock star David Bowie also won five awards for Blackstar, a record that was released a short while before his death in January 2016.

Other winners of the 59th Grammy Awards were U.S. rapper Chace The Rapper, as the Best New Artist of the Year and for his album Coloring Book; singer Beyoncé, with two awards out of the nine she was aspiring to; Puerto Rican vocalist Ileana Cabea (Ile) in the category of Best Latin Rock, Urban or Alternative Album; and the Snarky Puppy group, which in December performed during the Havana Jazz Plaza Festival and whose record Culcha Vulcha was the Best Contemporary Instrumental Album.

The gerund and the economy

Two Cubans in the mecca of magic