The Shakespearean love story comes to Cuba as a ballet thanks to two companies: one from Havana and the other from Cleveland. 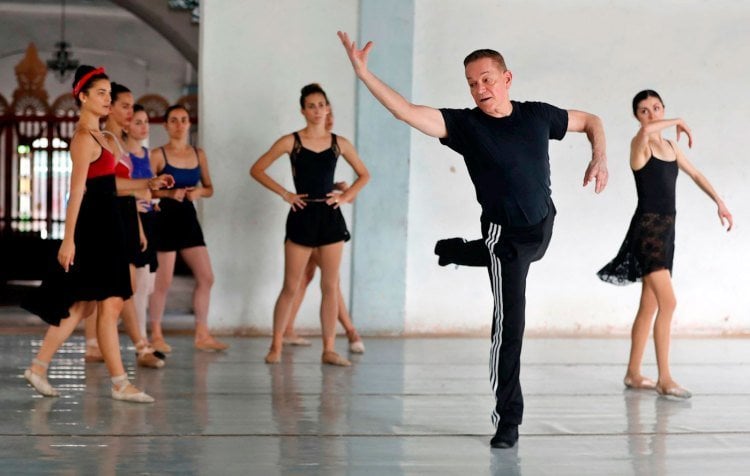 Richard Dickinson in the rehearsal of “Romeo and Juliet,” a Verb Ballets and Prodanza production. Photo: EFE

There were rehearsals the whole week to be ready for 28th, 29th and 30th. The performances at the National Theater of the ballet classic Romeo and Juliet would feature two companies: Prodanza, directed by Laura Alonso, and Verb Ballets, headed by Margaret Carlson, from Cleveland, Ohio.

First came the rehearsals separately: in Havana and the state of Ohio, the dancers were preparing to later polish details of the performance, a cultural exchange that has several years of history and that unites both countries thanks to the cultural bond.

The U.S. company had already performed in Cuba in 2018 together with Prodanza, directed by the daughter of Prima Ballerina Assoluta Alicia Alonso, who died last October. On that occasion Yarini was the piece chosen for the artistic alliance, choreographed by dancer Iván M. Alonso, about whom Laura says “I know a little…from afar,” she jokes in an interview with OnCuba.

“On that occasion the work was chosen by a former Prodanza member, who works with Verb Ballets, for the variety of styles in Ivan’s choreography: neoclassical, folkloric and also classical, with music by Edesio Alejandro, and it was the piece most liked by the American group,” adds Laura, who confesses that it was through this former student that the link between the two companies emerged.

For this occasion, Romeo and Juliet was not the first proposal that was thought of: “At first they wanted to present Le Chevalier, very liked by Verb Ballets, but at this time of the year we had previously produced Romeo and Juliet, because we were going to tour China, which was postponed,” explains the maître and choreographer.

Among the involved dancers the expectation was always high. Rosa Laura Pérez will be one of Juliets that will represent Prodanza during the gala. She says she learns a lot from the American dancers, because they are very expressive in their performances, “something fundamental for any ballet to reach the public, they focus a lot on the details and story,” she says and points out that sometimes Cuban dancers overlook these aspects because they give more importance to technical aspects.

Lieneke Matte will be the American Juliet. She confesses that this will be her first classical ballet and said she is grateful for the challenge, for being able to learn. “Two years ago I was able to share with the company (Prodanza) and participate in the production of Yarini, but this is another very different experience,” concludes the young artist.

On the other hand, Daniel Cho, who plays the character of Mercucio in the piece, also faces his first classical ballet and, despite his nerves, confesses that “it is a dream come true. It is a great pleasure because ballet in Cuba is very important for the culture and society of the country, which is not the same in the United States.”

“We are a contemporary company, although we have several classical pieces. It’s a little different for us and we’re a little nervous, but it’s fun, you learn to do these different things,” says the young dancer.

The choreography, also by Iván M. Alonso, son of the director of Prodanza, moves away from the usual standards of other pieces of the classical repertoire such as Swan Lake, Giselle or Don Quijote, giving greater importance to the dramaturgy of the characters on stage.

This is one of the main challenges for the performers, says Patricia Hernández, principal dancer of the Cuban company: “Luckily for me this is the third time I have performed this ballet, although new details are always added. It’s necessary to show the naivety of the maiden who is barely 14 years old. It is a very nice ballet to do because it is a different style in terms of dramaturgy and the way of moving is a bit more liberal too,” the dancer explains to OnCuba.

“I also share the leading role with a new young dancer, Ángelo González. This will be his first complete ballet, so I also have the responsibility of giving him free reign and helping him with his character. The most difficult thing about ballet is to represent the era and that naivety of the characters, because we are older than the ages we represent and we also have another idiosyncrasy. We have to get the public to believe that love story, one of the biggest and most universal in the world,” she concludes.

Richard Dickinson, associate artistic director of Verb Ballets, comments on how the link between the two companies arose “through the Cleveland Fundation, whose president loves Cuba and began a cultural exchange a few years ago between artists from Cleveland and Cuba: mainly painters, photographers and dancers. That was the beginning of everything.”

Dickinson points out that “we came to Cuba two years ago, just like other Cuban artists went to Cleveland, including Prodanza, from whom we learn a lot,” because for him “Cuban dancers are the best.”

The main promoter of the artistic exchange between the cities of Cleveland and Havana is the Cleveland Foundation, which for almost 10 years has maintained a close link in the exchange between Cuban and American artists in various artistic manifestations.

Through artistic internships, art exhibitions, visits between universities and literary and dance presentations in both countries, the non-governmental organization continues to advocate maintaining the cultural link beyond political issues.

The Cleveland Institute of Art; Barbara Tannenbaum, curator of the photography section of the city’s Art Museum; Kent State University, among other institutions, have also actively collaborated with Cuban projects and artists for a decade.

Plastic artists Álex Hernández Dueñas, Sandra Ramos and José Ángel Toirac (National Plastic Arts Prize 2019), architects Sofía Marquez and Ernesto Jiménez, writer and editor Laura Ruiz Monte and the Malpaso and Prodanza dance companies, are some of the beneficiaries during the cultural exchanges that since 2010 promote a link between the two countries, beyond political issues.