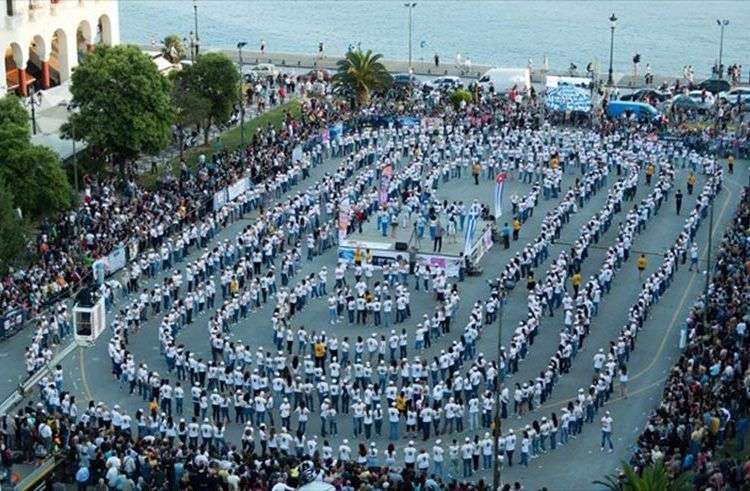 There are no details on how the crisis, the social and labor cuts, has affected the Greek city of Thessaloniki regarding the rest of the country. However, it seems a gathering of people very happy which brought together 1102 people to dance casino and thus claim the title by the Guinness World’s Largest rueda de casino

In Aristotle’s Square the collective choreography was performed by a dozen Greek dance clubs in early June, and was registered in the race for the record. There are references to other giant ruedas de casino in Colombia, where 500 people met in 2009, and Italy with a similar number in 2011, according to organizers of the Danza Fuerte Club.

We might then think, with the Greek scholar in a casual coalition, the issue of Cuban dance is a mystery to “interpret” in all latitudes, with their own way of deduction or seduction, as you like.

By sharing the video of the Greek rueda in his Facebook profile, researcher Cuban Carlos Alzugaray said that this phenomenon is the cuban soft power as an ironic allusion to the striking global acceptance policies developed by the Obama administration in its first term .

That might be the reason the videos with more views on YouTube which returns a search for Cuba are associated with the Cuban dances and not explicit political positions, as they do other categories of recovery.

No data for accreditation in the known index of Guiness Records, is the image of a Cuban flag as spectacular structure viewed from the air, achieved by students and faculty of the University of Computer Sciences in Havana in 2009, who called over a thousand couples in a square dance, an action associated with the demand for the release of five Cuban agents imprisoned in the United States.

For the historian of the National Ballet of Cuba, Miguel Cabrera, beyond the alleged Caribbean intensity, Cuban agility of leg movements of an art governed by a universal pattern, the hallmark of the Cuban school is associated with the link from the looks of the dancers.

The Cuban dance essences and prejudices of our racial composition, our education, neighborhood or age diversity better than the physiognomies or accents are also addressed. It is also a revealing map of the circuitry of the wealth distribution, modes of organization of leisure and flows of life in cities, as that of tell me where you dance … Even more intricate you is the passage of the sexual and the gender roles, who can lead the way, or who does not dance and look and therefore does not participate.

Finally, if the Greek city of Thessaloniki achieves its coveted record, have cast a shadow over the truncated television programs that fail to perform, on the screens of Cuba , those who know how to dance, or watch from a seat , say they feel. Nor some memorable dance has regular place in the most important audiovisual discourse of Cuban and international media consumption: the video clips, even with the success of Descemer Good and Enrique Iglesias.

It remains to be seen, in the dance floors, television, Internet or elsewhere, how it is built up in the new season opening and re-articulation of Cuba with the world, a way of living where such cultural products do not get lost in the aisles of a market, or missing, and can in turn be part of an array representation of identity, not stigmatized racial or sexual reductionism. Meanwhile, we have to learn to dance, or keep looking.