It wasn’t just about infrastructure. Movie theaters formed part of Cubans’ daily life and imagination with an unusual force. 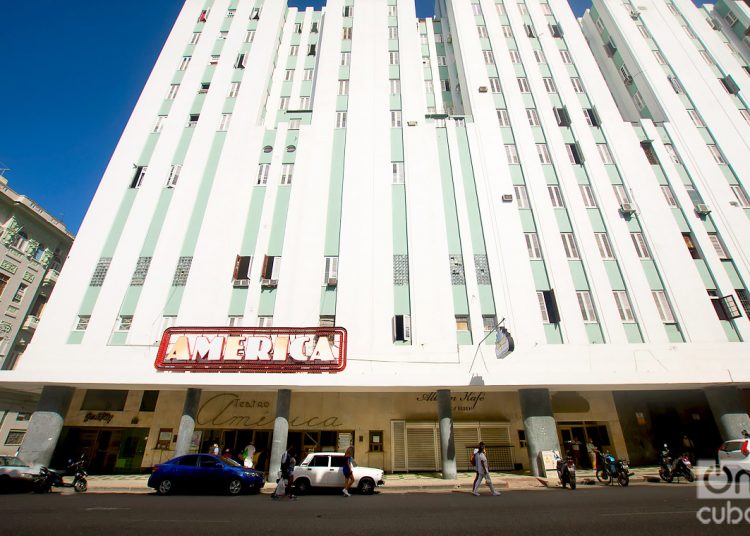 In the beginning, it was the Lumiere brothers. On January 24, 1897, the Frenchman Gabriel Veyre brought the cinematograph to Havana from Mexico City. The residents of the capital saw movies for the first time in 126 Paseo del Prado, next to the Tacón Theater, today the Alicia Alonso Grand Theater. The visitor exhibited four short films: Game of Letters, The Train, The irrigator and the boy and The Funny Hat. Shortly after, Veyre himself would make the first film made in Cuba: Simulacro de incendio, a short about Havana’s firefighters, the same ones who seven years before, on May 17, 1890, had lost 25 of their troops in an explosion that occurred at the Isasi hardware store, on Mercaderes and Lamparilla.

The second step was the open-air movie theaters. In July 1909, the Miramar Garden was inaugurated, on Prado and Malecón, near the famous Glorieta, the first venue of its kind in Havana, a modality that would become quite popular for some time. But with an obvious drawback: the public had to be out in the open in a country with a regime of May rains and downpours, as reflected in a well-known popular tune. Or having to get up from watching a film by the cowboy Tom Mix during the cold fronts coming from the North, which usually bring rain. Near the Garden, on Prado between Ánimas and Virtudes, the Royal was built, also outdoors, among others.

The third was the private houses set up as movie theaters, a reminder in time of the role of self-employment in Cuban life, although they did not cancel the work of theaters such as the current Martí and the Payret, which were there practically from the beginning showing movies.

According to the researchers María Victoria Zardoya and Marisol Marrero,

on January 1, 1900, the premises used for the Niza movie theater, next to the Payret Theater, were opened, the first to place the program at the door of the premises, which was quite an event. In some cases, signs were also placed perpendicular to the second line of the façade, which could be seen by whoever was passing by. In the portal, there were also the box offices for the sale of tickets, and in the oldest movie theaters, it was usual to find a commercial establishment or annexed confectionery for the sale of light food. In this way, the avenues’ public portals became leisure corridors in which the movie theater coexisted with shops and recreational activities of a different nature.

And they later wrote:

Among the movie theaters born from the remodeling of a home, the Esmeralda, located on the Calzada de Monte, stands out, which conditioned the mandatory nature of the portal for public use with its adjoining buildings. In the first Esmeralda movie theater, created in 1908, ornamental motifs of frank modernist descent were combined in an eclectic way.

The fourth, the movie theaters as such. Parallel to the previous modalities, buildings designed specifically as movie theaters were emerging. Among historians, there is usually a consensus in recognizing that the first theater built as a movie theater in Havana was the Actualidades, in Monserrate between Neptuno and Ánimas. Inaugurated on April 18, 1906, it is perhaps the oldest in Latin America and one of the few that are still standing. Certain specialists, however, give that condition to the Floredora movie theater, on Calzada del Cerro and Palatino, where the Maravillas movie theater stands, today in dire condition just like the rest of its neighborhood counterparts.

During the Dance of the Millions, when the price of sugar skyrocketed in the world market, the movie theaters constituted fundamental support of a new modernity, emblematic not only in those mansions of Paseo and G Street but also in the “fotingos,” a word that emerged then in popular speech to designate certain cars and originated in the transliteration of a Ford commercial: foot it and go.

As was to be expected, in these domains the Prado could not but take the lead: it was the promenade of lights. Between 1915 and 1920, the Fausto movie theater was built on Prado and Colón, the most luxurious of its time. Nearby were the Maxim (Prado and Virtudes) and the Galatea (Prado and San José), two of the highest category. Also famous was the Prado movie theater (Prado and Trocadero), renamed Margot in 1918.

Alejo Carpentier attests that then

It was like a kind of epidemic: movie theaters were even built inside the Sevilla and Miramar hotels, there in two places quite close to the Prado.

Around that same time, there would be a change in the nationality of the movies that Havanans saw, as the Americans dominated over the European ones. A historian reminds us that, in effect, until that moment

the main ones that were released were Italian…the public preferred the European ones, which had made a season of “American” movies fail. That year [1914] 12 Italian films had been released, one “American” and three from other nationalities, in addition to a Cuban (La manigua o la mujer cubana). However, in 1919 the vast majority of those exhibited were “American”…. Cuban screens showed actors and actresses such as Mary Pickford, Charles Chaplin, Douglas Fairbanks, Priscila Dean, Gloria Swanson and Lionel Barrymore, soon to be joined by Rodolfo Valentino. Although the Cuban movie Los matrimonios salvavidas was also released, which recreated the wave of marriages that was unleashed to evade compulsory military service.

On October 20, 1921, the businessmen Santos and Artigas, the owners of the famous circus by the same name, inaugurated the Campoamor theater, on Industria and San José, built at a cost of 300,000 pesos. The Campoamor would transcend, among other things, for having premiered in Cuba The Jazz Singer, by Al Johnson, as is known, the first sound movie in history. This happened on February 15, 1928, a few weeks after it was exhibited in the United States on October 6, 1927.

In 1938, Havana had a double movie theater on San Rafael Street: Duplex and Rex, as there were in the United States. Then the América came to Galiano and Concordia, a true Art Deco fiesta. Designed by the architects Fernando Martínez Campos and Pascual de Rojas, its capacity for 1,750 spectators made it a colossus. Its owner, Antonio Helder Rodríguez Cintra, operated it through the Itálica S.A. real estate company, to which another movie theater-theater also belonged, the Rodi in Vedado (the current Mella, Línea and A). The América opened its doors as a theater on March 29, 1941; eight years later it would begin to function as a movie theater. Also at that time the Fausto movie theater was demolished and rebuilt using that new style that pays tribute to the eclecticism of Havana, in this case, thanks to the work of the architect Saturnino Parajón y Amaro. And the Reina movie theater was also built, on the street of the same name, with identical aesthetics. It was one of the most significant buildings on that avenue and one of the most important movie theaters in the capital, with a capacity for 1,570 motion picture fans.

But at the end of the 1940s the epicenter of the movie theaters began to move towards Vedado, where they already existed way before, and in particular towards La Rampa, started in 1948 on 23rd and L streets with a cultural and business complex designed after the famous New York Radio City, and in particular with the Warner movie theater—later Radio Centro, later Yara—with capacity for 1,700 people. There would be shown the first Cinerama movie, technology released in the United States in 1952.

Before arriving at Infanta and L, another movie theater was built, designed by the Cuban architect Gustavo Botet, initially for the Tony Bowling Alley, but readjusted for use as such. In 1957, the Todd-AO system, made to compete with Cinerama, was unveiled there, with the exhibition of Around the World in 80 Days (1956) and the performances of David Niven and Mario Moreno (Cantinflas).

A little further from La Rampa, on 23 and G, the Riviera movie theater was built on the same spot occupied by an old 1927 theater. Moving up a bit was the ultra-modern Atlantic movie theater, at 23 between 10 and 12, renamed as Charles Chaplin in July 1983. That “row” of movie theaters from P to 12 streets would close with the 23 y 12, inaugurated in 1941 but with another name: Astor. In 1952 it was modernized and given its current name.

In another area of ​​Vedado, downward, quite close to the sea, were the three movie theaters on Línea Street, the old route of electric trams. The Trianón movie theater stood on Línea between A and B since 1920, designed by the architect Joaquín Emilio Weiss y Sánchez, remodeled in 1955 and destined for the premiere of 20th Century Fox movies. Nearby, practically crossing the street, was the Rodi, built three years earlier, in November 1952. Undoubtedly one of the most luxurious in the capital, with a capacity for 1,887 spectators and built following the patterns of modern architecture. The trilogy of neighboring movie theaters was closed by the Olimpic, inaugurated in 1920 and turned into the Raquel Revuelta Theater in 2010 after many years of neglect.

The panorama would be completed with an absolute novelty: car movie theaters, once again following the American model. In Havana there were three: the Novia del Mediodía, the Autocine de Tarará and the Autocine Vento, the first two with a capacity for 500 vehicles and the last for 866.

As a whole, it is stated that in 1919 there were 42 movie theaters in Havana. And around 300 throughout the country. Forty years later, at the turn of the 1950s, according to the 19th annual edition of the Anuario cinematográfico y radial cubano (1959), there were 100 movie theaters in the capital. Undoubtedly, an important sociocultural fact. However, this figure has often been magnified in different articles that circulate on the Internet and social networks, a result of “Cuban exceptionalism” and ultimately the discourse of nostalgia. The same perspective has led to spreading the idea that Cuba was the first country in Latin America to have television, which is not true: Mexico and Brazil were first, on August 31 and September 19, 1950, respectively. On October 24 of that year, Gaspar Pumarejo managed to launch Unión Radio TV Channel 4 on the air. Cuba was, therefore, one of the first countries in the hemisphere to have the mass media par excellence of the new times, not the first.

But it wasn’t just about infrastructure. Movie theaters formed part of Cubans’ daily life and imagination with an unusual force.