Lucia and the music 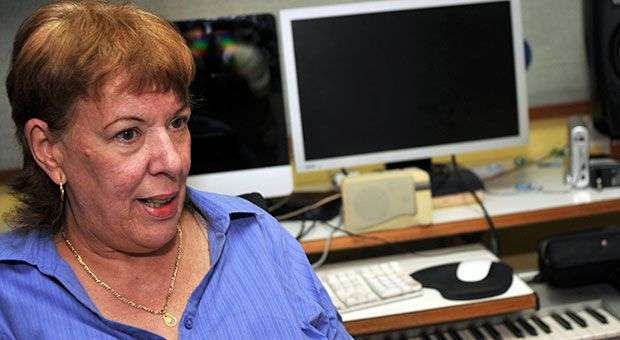 Lucia Huergo does not usually give concerts. She has enough music, but, for some strange reason, it seems that she is more comfortable working for others, sharing the stage, to face the public alone. So she says is nervous because next October 12 she will offer her first big concert in the theater of the National Museum of Fine Arts ( NMFA ), flagship of the arts institution in the island

According to those who have had the privilege of watching her on stage, Lucia is fluent in various instruments: saxophone, flute, clarinet, oboe, electronic keyboards … and is able to venture into the most diverse genres. She has also shared her art with prestigious groups as Sintesis y Mezcla.

However, amid the hustle of the rehearsals at home, she agreed to talk exclusively to OnCuba about her upcoming appearance on the scene, in which, probably, she will demonstrate her skills as an instrumentalist, work will appreciate those attending this show.

What is special in this presentation at the NMFA?

I haven’t given a concert in a long time; this is the second time in my life that I will give a concert alone. It will cover all my work, and I also include the songs of mine, some of Marta Valdés, Isolina Carrillo, my pianist Carlos Gaitan, Donato Poveda, David Torrens, Alberto Tosca, among others. In fact much of my career has been making arrangements or compositions for others. This time, I will play mainly flute and saxophone.

What guests will you have?

I have confirmed Sonia Conduché, who was the singer with Mezcla, years ago, now she lives in Mexico and wants to work here. Now she works with Armando Manzanero, she comes on the 10th, rehearsals on the 11 and 12. We gave a concert with her and I know that she has all ready for the presentation in Cuba.

Where else have you performed in the island?

The first concert I was talking about occurred less than a year in the Abdala patio, when the CUBADISCO … I wish they give me a national tour. I’ve been in small things like the Jardines del Mella , the gatherings of Heidy Igualada , Marta Campos, and presentations at the José Martí Cultural Society , but this will be wider and in a very important place for Cuban culture. So I’m a little nervous, because agreeing with the other musicians is a mess, as each one works with other groups. There were flaws in the rehearsals. We will do three times a week, it is critical that it works.

Where does your inspiration come when creating?

I believe in the moment when I am to create. If it is for a troubadour or other interpreter, I follow him, but I keep to myself and compose my stuff if I get to film within the film: The film I recently did Anna, by the late Daniel Diaz Torres and I got very good communication with him. I like that I go getting into the world of another person.

– What other movies have you participated in?

I really had little opportunity to work on fiction films; I have composed more music for documentaries. I recently worked with Isabel Santos, one about Che, another about Playa Giron, by Belkis Vega, and the Estela Bravo on Operation Peter Pan, among others. But I love composing for film. I don’t find it complex. The music comes out more when I have contract work. I have to see an image, make me a story, something that stimulates me.

What if that does not happen?

I have a second option to work in music production. Now, basically I feed from my studio, where I play writer and producer. I have recorded albums there for Liuba Maria Hevia, Polito Ibáñez, Amaury Perez, of very great orchestras, like the Maracas, and the last thing I did was with the director of Artes de Concierto, which has a female instrumentalist’s project except the trumpeter that was a man.

In your career have you suffered machismo sometimes for being a woman playing primarily instruments that normally be more usual for men?

In my case, when I was younger I had problems because men couldn’t admit that I knew more or like them. I had these problems, not so much because they know me and they adapted. The sax is a little strong for a woman; you need a lot of breath. Although, more and more women are playing jazz at festivals. When I was younger I played more and better, now, at 61, I find it hard, for this reason I stopped playing, to make arrangements and productions. I graduated in saxophone and flute and also studied clarinet, oboe and piano.

Self-employment in Cuba: more string to the kite...