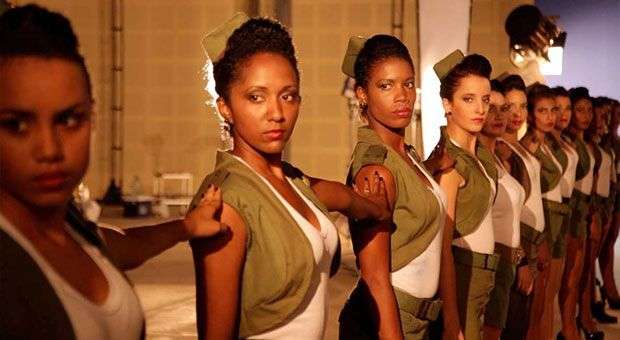 What began as a mere documentation of work in progress of the play Antigonon, a contingent epic, the most recent staging of Carlos Diaz, director of The Public Theater troupe , has become a Cuban filmmakers project that questions the role of women in the revolution of 1959.

Still in production, Antigonon, the Process, it explores, also from the Greek myth of Antigone, the incorporation of women to the Cuban revolution, from a feminine and young look.

In 8 well-defined frames it includes the rehearsal of the work in progress by Diaz, a stereotype of motherhood, Cuban education system, participation of women in the failed harvest of 10 million tons of sugar in the early 70’s the last century and a representation of what may be the two Antigone, by the text by Rogelio Orizando, within five decades, among other topics.

If the Greek Antigone was sentenced to be buried alive for having buried the body of her brother Polinicles, “the Cuban Antigones bury utopias,” Yaíma Pardo told OnCuba. She along with Lilian Broche directed the documentary, which showed only a “first cut” at the Ellas crean Cuba Festival.

“We researched on the utopias we wanted to meet, what we Cubans should bury from the staging. We try to answer us who we are and what we want, and we made our choice, “the fledgling filmmaker confessed.

The plurality of the production team, made up of 15 women from all specialties that make up the traditional film crew, can disagree with this thesis.

“I could say that I will bury the lines, the buses, the lack of money … but not, because I have to live with that, as long as I have to. So for now, I have nothing to bury, “one of the actresses of Antigonon …, Giselda Calero, said.

Calero, daughter of the Cuban actress resident in Spain, Jacquelín Rosales, confessed that her mother, who emigrated six years ago, has not returned to work.

“The life of my mother was the stage, at a time when that more was done with less. What is harder? I do not know. To me I have lived what she had and I do not know if she would bury everything, to stop doing theater, “she said.

For Pardo, with a work that encompasses public good campaigns and teleplays, it is the contribution of “women artists who have stayed in Cuba to build our identity as a nation.”

Meanwhile, for the young recent graduate of graphic design, Yolanda Duran, “it was not only a job opportunity, but a way of saying things that I can in the assemblies of accountability (unicameral parliament mechanism for contact with their voters locally), without being frowned upon “.

“It is saying what I think as loud as possible so nothing happens to me … because paranoia is inevitable,” Duran said, who was in charge of the frame on the harvest of 10 million, with a questioning view on a task that mobilized women and men in 1970 and was never fulfilled.

Women in Cuban cinema: so simple?

“We chose women and youth, something that a team led by men certainly would not have done,” Pardo said on the proposal to work only with women.

In the material of 80 minutes, only appears a man, actor Jarlys Ramirez, defined as gay and who embodies the character of a mambi woman, in an attempt to legitimize the art of impersonation on the island.

Pardo is not sure of the true contributions of feminine insight to the film, the existence of a language of women. But she advocates on the need to work in equity and as she does, “to empower already trained specialists.”

Since the advent of digital technology, with the consequent cheapening of production processes of cinema, there was a numerical increase of women filmmakers in the world. Cuba has not been the exception, although Cuban film industry still reflects traces of patriarchy on the island.

To date, only two women have served as directors of feature films. Sara Gomez, who died before concluding De cierta manera, and Nicola Carolina, which made hers, Asi de simple, without support of the Cuban Institute of Cinematographic Art and Industry (ICAIC) and then migrated.

In the coming months, the Cuban filmmaker Marilyn Solaya could become the third director to achieve having her long fiction, with Vestido de novia.

The Cuban women were favored by the triumph of the revolution with measures that allowed them access to the public space, the active part of the economic, political, social and cultural.

But despite legislation seeking women empowerment, gender biases inherited from the patriarchal culture survived and were intensified by the economic crisis of the 90’s, according to experts

Lucia and the music

Self-employment in Cuba: more string to the kite...