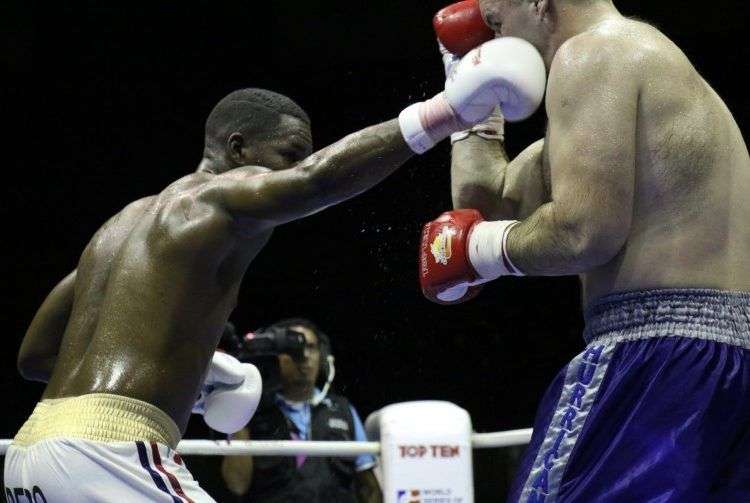 Like a fish in water, like a lion in the savanna , that is the way the Cuba Domadores, defending champion, feel themselves during each match in the 5th World Series of Boxing (WSB). Their actions reaffirm them as clear candidates for the top this year, and their third sweep at the Sports city Coliseum (fourth globally) make them maintaining the leadership of group A.

It looks like a memorized script which is yet enjoyed: each confrontation invariably leads to a victory. And in their last appearance we witnessed how the C-2 format (52, 60, 69, 81 and 91 kg) remained undefeated, this time against the China Dragons, a franchise that landed without its leading figures.

Yosvany Veitía, world bronze medalist, defeat ed 3-0 Yong Chan, with scorecards of 49-46, 50-45 and 50-45. This was his 10th win in this type of event without the shadow of a loss. Now at 52 kilograms, the also Pan American runner up is proving to be one of the exponents called to contribute this year in the continental and universal tournaments.

“I’m much focused to get the Olympic ticket. It’s refreshing to maintain the supremacy. I feel myself strong at this new weight, and hopefully this cycle will bring joys. It is always a pleasure to fight at home, due to public support and because this site has witnessed great moments in our sport, “said national monarch.

Despaigne, second in the world, said he was out of rhythm, “because I’ve been through some personal problems in recent weeks. I had been training with the team for only 15 days and when knowing that I was appointed to replace Roniel, I had to lose weight quickly. Anyway, I’ll keep looking my best sportsmanlike manner and the Cuban people can always expect the best of me. ”

The other winners of the evening were Julio Cesar La Cruz (81) and Leinier Pero (+ 91). The first one, two times world champion, indisputably defeated Shi Guojun (50-43, 50-43, 50-43); and the second, continental champion in 2011 in the lower category, did not hesitate when facing the Serbian Vladan Babic, a man who outweighed him by about 30 kilograms.

“The strategy from the corner was to take advantage from my speed, and move around the ring, due to the difference in pounds. I had to take care of his right hand, and try to penetrate with blows, i.e., fighting from the distance. I think I got it, and this victory gives me more confidence for future endeavors, “the super heavyweight stated.

In other outcomes of the competition, Russia defeated 5-0 the coming rival of Cubans, with wins to the account of Vasilii Vetkin (52), Adlan Abdurashidov (60), Radzhab Butaev (69), Pavel Silyagin (81) and Maxim Babanin (+ 91).