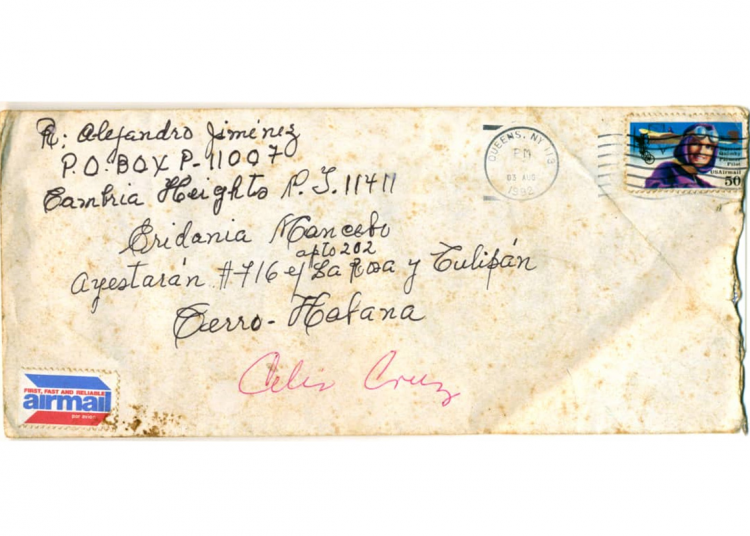 Original envelope where the letter from Celia Cruz to Eridania Mancebo was sent.

Contrary to what one might think, Celia Cruz never broke human ties with the people she loved — her family, friends and colleagues — who had remained in Cuba. Circumstances imposed her iron rules and forced her to adopt dissimilar ways to assert her affective presence. The much later moments in which she did not publicly empathize with some Cuban musicians who had emerged after her departure from Cuba are better known, but everything seems to indicate that Celia was faithful to her affections, no matter where they were.

Among them, in a special way, were some women composers who created many of her songs. Among her first recordings, there are already two of them: the Cuban Carmelina Kessell (“Ocanasordi”) and the Puerto Rican Myrta Silva (“Para que sufran los pollos”), authors of the only two songs that Celia recorded with the Gloria Matancera ensemble. Later, with La Sonora Matancera, and with the consent of its director Rogelio Martínez, Celia included numerous guarachas, afros, boleros and sones montunos created by female composers, favoring their works over the overwhelming majority of male composers, and making several of them known. they.

But among them, the one she sang and recorded the most was Eridania Mancebo (Matanzas, January 18, 1911-Havana, November 27, 1993), the upper-middle-class lady who succumbed to her passion for Cuban popular music. Educated at the exclusive Las Ursulinas school, Eridania Claribel Mancebo y Valdés had her first approach to music in her own family: her first piano teacher was her grandmother and then, as was appropriate, she continued in the best conservatories in her hometown of Matanzas. Little by little, her passion for guarachas, boleros, afros, was discarding her obligatory exercises with pieces by the great composers of world classicism. Not even her marriage to Francisco Sabas Alomá, a successful merchant, made her give up. “She was the most independent, rebellious and creative of the three sisters, and was able to carry forward her love of writing songs, in parallel to her status as a small businesswoman, since she opened and ran a small photography establishment,” said her niece and executor, Maggie Eirea.

Eridania Mancebo’s authorial catalog covers the decades of the 1950s and 60s and tells us that, as a composer, she was creative and groundbreaking, addressing genres that range from tango to rock-pop, including those she is most passionate about: guarachas and afros. Her songs were interpreted from Barbarito Diez, Miguelito Cuní, Lestapier, the Flores Valdés ensemble, Bertha Pernas to Raúl Gómez, Leonor Zamora and Magaly Tars, among others. The legendary Aragón orchestra made her samba-cha “Que tenga sabor” a great success.

But the greatest triumphs were savored by Eridania listening to her compositions in the voice of Celia Cruz. The creative relationship between Celia and Eridania began with the guaracha “Un paso pa’lante, un paso pa’tras.” Although this guaracha does not appear among the studio recordings made by Celia, there is a record of a program on Radio Progreso from 1953 and it was collected on the CD Celia Cruz en vivo, Radio Progreso 1953-54 (Bárbaro Records, B-226 ), where, with a longer duration than the usual record recordings, the improvisational qualities of La Guarachera de Cuba are clearly shown. The same thing happened with “El Negro Tomás,” another of Eridania’s guarachas, whose radio record in the voice of Celia was recorded in the same series by Bárbaro Records. Celia premiered other songs of her, although she never recorded them: on the CMQ program Cascabeles Candado, she sang for the first time “Bajate de las nubes,” “Otro amor vendrá” and “Me enseñaste a querer.” In a duet with Celio González and always with La Sonora Matancera, she premiered the guaracha “No le tires.”

“La merenguita,” also a guaracha, was the first song by Eridania Mancebo recorded in the studio by Celia, on January 30, 1956, arranged by Severino Ramos. In 1959 “Sueños de luna,” a lamento-afro with characteristics very different from the imaginative guarachas of Eridania, became another new success in the voice of Celia. Recorded in July and included on her LP Su favorita Celia Cruz, “Sueños de luna” became one of the songs that the U.S. press (Daily Mirror, 11-25-1959. “Celia Sings Loud and Clear”) highlighted when reviewing Celia’s performances in her debut at the Million Dollar Theater in Los Angeles in November of that year, when she was still living in Cuba.

Eridania Mancebo became a friends with Celia and the musicians of La Sonora Matancera through her songs, which they made lasting. In 1960, they left Cuba and Eridania remained on the island, where her songs continued to be heard in other voices, but not in Celia’s. Twenty years later, “Sueños de luna” is re-recorded, now in the voice of Caridad Cuervo, another worthy guarachera, who as a child was compared to the great singer and encouraged by her, and now was retaking — although without mentioning her — some songs from the original repertoire of she who had been her mentor and inspiration.

In October 1990, Celia was already back from the monumental successes achieved through her link with the New York salsa movement and her recordings with Fania Records. Her career continued to unstoppably expand. There were 11 days left until her 65th birthday and on a flight to San Antonio, Texas, to fulfill one of her many professional commitments, she wrote to Eridania Mancebo. Her former manager Omer Pardillo remembers that planes were places where she used to put in order her pending correspondence. This was not the case, but probably, the proximity of a propitious date for the recount and the recent death — on September 28, 1990, only 12 days before — of Carlos Manuel Díaz “Caíto,” the legendary singer and maraca player of La Sonora Matancera, and her great friend, motivated her. She never stamped her real name on a letter, nor a cable to her family and friends in Cuba. Here, for her friend Eridania, she was “Barbarito’s sister”; before, it could have been “The cross-eyed,” “Nenita’s cousin” or any other nickname that came to her. She never stopped writing to them.

On a plane to San Antonio

I know that this letter will surprise you and although I hope you have never thought that I forgot you, because I always ask my brother about you, I know that it must miss surprise you. I was always tempted to write to you, but with the fact that the letters were delayed or did not arrive, I was disappointed. Today, thank God, they continue to be delayed, but they arrive. A few days ago, I spoke with Bárbaro [her brother] and told him: give me Eridania’s address again, now I am going to write to her, and here I am doing it. I am very well, the same for Pedro [Knight, her husband], Gladys my sister and her children and husband. I imagine that Bárbaro will keep you informed of how many beautiful things have happened in my life. These days somewhat sad because our brothers continue to abandon us. First Lino [Frías, pianist of La Sonora Matancera], then Yiyo [Ángel Alfonso Furias, conga drum player of LSM] and now Caíto. It is known that we all go down that path, but we do not get used to thinking that it has to be that way. About Oneida [presumably, Oneida Andrade, the composer], I haven’t heard from her in a long time. We used to talk from time to time and send each other Christmas cards, but not even that anymore. I haven’t heard from her for many years.

Well, Eridania, receive that affection that I never stopped having for you and I found out how well you behaved with my Mother. A very strong hug and see you again. Your friend.

Eridania jealously kept in her archive the letter from her admired friend. She wrote in red on the envelope the true identity of whoever sent it to her. The envelope indicates an unknown sender and the address of the recipient: the building on Ayestarán Street where Celia used to visit her. Other times she was the composer who came to Lawton and spent long hours with Celia and her family in the little house on Terraza Street. The friendship was put to the test in the bitter days of the long illness of Ollita, Celia’s mother. In Havana, Eridania was there, supporting as much as possible, accompanying the family. The singer knew it and she did not forget it. The friendship and loyalty endured, but Celia Cruz and Eridania Mancebo were never able to embrace each other again.