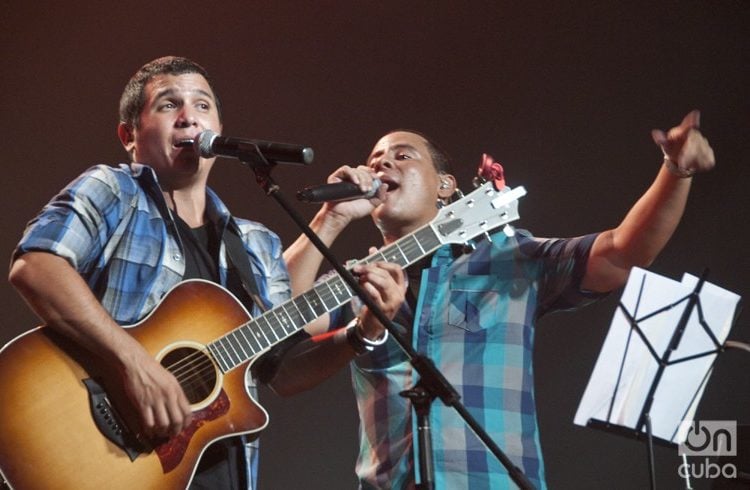 What happened with Tampa’s December concert? asked Dailes Maqueira, one of Buena Fe’s followers on the Facebook page of the renowned Cuban duo. The artists rapidly replied: “It’s been canceled by the organizers. We regret it very much for our public in that city.”

Javier Otero, Buena Fe’s manager, said to OnCuba that “the reason for the cancelation of the Tampa concert was precisely Israel’s statements, which contributed to people protesting on the phone or on Facebook to the organizers and they, not used to this type of differences, decided to withdraw. We don’t judge them because of that.”

“Eternal glory to Fidel! History, open the gates! They could not stop him when he was flesh and bones. Now he is invincible. He will be reborn once and again,” Buena Fe wrote on its page. Further on, Israel Rojas, leader of the band, made an appearance on national TV, which until Sunday has a special broadcast dedicated to the deceased Cuban leader.

Otero pointed out that after this they decided to cancel the rest of the concerts programmed in the United States. They already spoke with all the organizers and will resume those performances “when the conditions are favorable.”

Buena Fe is the most beautiful we have embraced. We decided to cancel the concerts we would give in several U.S. cities in the next days. To our followers, our most sincere apologies, but it is not fair to irresponsibly expose you, neither you nor the organizers. Love is infinite. Music will continue being the home for those who like it can enter no matter what color the moon dreams, said the tuit.

The group had announced on the social network that it had planned performances in the United States in December, among them Tampa’s, as well as another two in Washington DC’s Tropicalia and New York’s SOB’s (Sounds of Brazil).

According to El Nuevo Herald, “numerous persons contacted the event’s organizers and expressed their disagreement with giving a concert in Tampa.”

“We decided to cancel the entire tour out of respect for the public, for the Cuban community in the United States,” an executive of Blue Night Entertainment, the company that produced the performances, said to this newspaper. “We don’t want to annoy people,” he said.

On Facebook a follower commented that “it was atrocious for the artists to act this way,” to which they replied: “From now on you will have to hate all the Cuban musicians that today are saying the same as we did in the media. Careful. Along that path you will have to stop listening to music made in the Cuba of today.”

One of the most commented posts was that of November 27 where they shared a fragment of their song Oraré (I Will Pray) and the clip of the song on YouTube.

To one of the commentaries against them speaking publicly about Fidel, Buena Fe replied: “Our music is made for that. To make others feel good and to reflect. Social criticism is not the patrimony of left-wingers or right-wingers. If you don’t agree with us, we respect you the same. Have we been useful to you at some time? The task is already done. We continue here, singing for the youths in the schools and in the towns throughout Cuba. A bit older, but songs are still born that are sung by voices that someday were yours. That is what we are. Critics from the left, honest up to what is almost dangerous. Immensely happy to sing for those who want to listen to us.”

Several Cuban artists resident in the island have made public their condolences over the death of the leader Fidel Castro. Musicians like Haila María Mompié, Alexander Abreu and Samuel Formell also did so from Cuban television.

Meanwhile, on Buena Fe’s Facebook page many coincided in that art, amen of their creators’ political beliefs, should not have barriers, as Dany VC affirms, “respect is the foundation of any social relationship….”