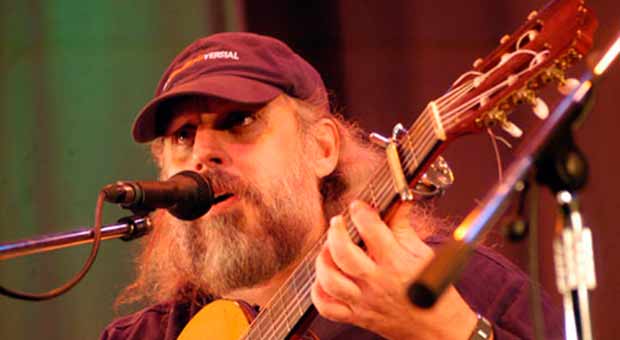 We have to save the ship, trova singer Frank Delgado says with the title of his new album in production SOS (save our ship) and I’m sure that his songs convey an alert on Cuba’s complex and sharp reality today. That ship can represent a song, a philosophy for life, a paradigm, a dream, a country. The author of Trovatur, Veterano and Las dos orillas brings a new album with a chronicle he has been working on for years, based on a musical tradition that reminds us of Miguel Matamoros or Sindo Garay and that constitutes an undeniable memoire for the Cuba of the last decades.

SOS is the provisional title for the album. I’ve already recorded a few songs with Kelvis Ochoa, Buena Fe, Pancho Cépedes and Ray Fernández. I will also include a version of the song Orden del Dia with Isaac Delgado. On March 25, at 8:30 p.m., I will share some of these songs at the Mella Theatre, in Havana. I always try to make a concert per year so that the audience can tell me if I’m still on the right track, where I standand if they are still interested in my songs. I’ve always liked to have that kind of contact in places where people do listen. The Mella Theatre is the perfect place for those people that have always followed my work, because I’m not one of those artists that crowd the Karl Marx Theatre.

I have never recorded thematic albums; my CDs are mostly by time frames. I often include songs I’ve made after the most recent album and I record them gradually, when there’s money to produce. Thus, they pile up as has happened in my last two albums. Then, I present the material to a record label. My recording is independent; I cannot wait for a recording house to give me the financing.

I worked for five years in the record Ustedes los trovadores no saben na´ de la vida, which was awarded at the Cubadisco Festival in the Trova category. You can do the recording your own way, at your pace, according to your own guidelines and mainly without the pressure from label houses. You have the chance to improve it at home, at ease, and that is noticeable in the results of the album. After I’m done with this project, I have others in mind. Technology makes our work easier.

I didn’t have the chance to record an album when I was young. Perhaps before launching my first one I would have launched other two. At that time I did depended on a recording studio and there was a long line of devoted artists that could not do it or just didn’t do much. I started to record at 35, but this album had a lot of success in Cuba due to “burnt” copies and pretty much the same occurred with La Habana esta de bala. Thanks to the new technologies, my work has spread and I have been able to remain by my followers.

In difficult moments in my personal life, art kept me alive, it was my life jacket. Culture is like a huge life jacket. Our priority is to make Cuban culture last in time. There are people around culture who have nothing to do with it, mostly mercenaries working in places somehow linked with art, who would be better off running a coffee shop or the like. On the other hand, I can name artists that have developed good personal initiatives in places such as El Mejunje, in Santa Clara province and Teatro Reguero, in Morón.

The absence of artists directing and organizing cultural projects is really noticeable. Besides, gastronomy has to be subjected to arts and not the other way around, like it often happens. Those places should not be ruled by merely economic criteria. Many Cuban creators are choosing private initiatives because, sometimes, there is some sort of divorce between creative and administrative directions in cultural places run by the State. Artists should be taken into account when deciding the limits between culture and profitability.

Those who don’t know the lyrics, la-la-la…

I think it is important to have clubs with reasonable prices so that the audience can follow the trova. It is also true that often these spaces are not functional economically speaking for artists. I have always lived for arts and not from it. I realized there were mechanisms for singers to get paid for their job. Then, night clubs emerged and I thought culture could have a space in them, because it has always been left for matinées and nights were exclusively for “artistic” elements with doubtful origins.

In 2008, I got to the Cultural Center El Sauce; there I was in charge of the artistic direction of the show. Later on came other proposals for people that could afford them in places such as El submarine amarillo, Café Brecht and Pepito´s Bar. Those are important places but we also need places with reasonable prices for the everyday Cuban. I can mention projects like Noel Nicola’s at the Palacio de los Capitanes Generales; and La Séptima Cuerda at the José Martí National Library, or LasTrestazas by Silvio Alejandro at the Pabellón Cuba. During the summer of 2012, I had a space at El Sótano Theatre in Vedado, and I hope to have it this year as well.

My songs are rather narrative than poetic. I look for a story and I develop it. The important thing is to find untold stories, explore one of the many edges of Cuban society. It is really hard because there are young trova singers with a tremendous wit. These are peculiar times and I try to be in the group that pays closes attention to the Cuban reality we are living in. That’s how Carlos Varela and I started; as well as Gerardo Alfonso and Santiago Feliu who was the most poetic, eclectic and polysemous character among all of us. I don’t live in a bubble, I’m aware of everything that happens in the supermarket and even in the “black market”. It is the approach I stand by. Everything I’ve done has to do with it.

Chapman is made of steel