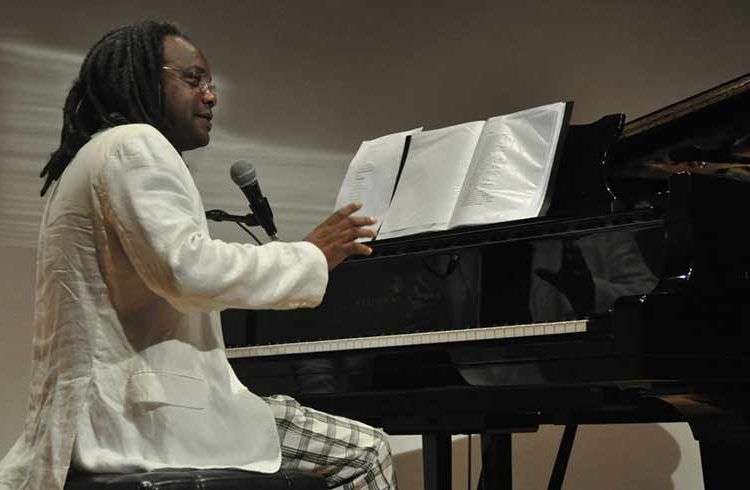 I have a relation with Gerardo Alfonso that began even before we met inperson. This poet Gerardo has indeed nourished my bond with him, which was idyllic by that time.

It turned out that, in addition to his songs, a familiar relation and some common interests brought us together more than once. Despite geographical distance, this singer-songwriter agreed to answer a few questions for this interview, which allowed us to get and update on his plans and recall some memorable moments of the New Cuban Trova movement and also think about what it means to produce an album in Cuba.

“Yo te quería María“, “Sábanas blancas”and “Quisiera” are some of those songs that make us go back in time by just remembering one word. I have the feeling you are a singer-songwriter of famous songs rather than popular albums. Am I wrong? What do you have to say about it?

You are right. I’m the result of my songs rather than my albums and I will tell you why, assuming this is of interest for the readers. Some time ago Cuba lost the profession of producing records. I cannot tell you when or for how long but I dare to say that from the 70’s till the mid 90’s, in general, the albums produced in the island were not such a good commercial product and not from the artistic and cultural point of view because they had a high artistic level as to the content. However, the technology implemented was very poor and given the scarce possibilities of getting in touch with the market we were no able to weigh up, correct and improve the quality of our products.

Many great artists produced records not up to par in the international market from the sonorous perspective. In that huge production it is included some records by the New Trova, including mine. It would not be fair to disregard the fact that I didn’t know how to produce records; and album “Sábanas Blancas”, which comprises the three songs you just mentioned is not very successful in that regard. The truth is that if I could I would record it once again.

Nonetheless, there are songs that “fill me with blessings” as the great Matamoros said in “Lagrimas negras”. Today, we have learned a lot about producing record, we are now able to produce really good albums, there is knowledge on production and we think about selling. I have got positive results in my albums from this experience, but if they are not sold it is not because they lack quality.

Your album Razais perhaps the first album in Cuba evoking a colorful island in terms of racial relations. Yet, it is not very popular. Why?

Razais an art record. Products with higher artistic quality face the risk of not being promoted in the pertinent spaces. Then, their language is not understood if they fall in a circle where the products sold are exclusively commercial. Please, take note that in not arranging anything in a hierarchy, I’m just clarifying two different concepts. It is useless to sell aspirin in a butcher’s shop or meat in a bookstore, these don’t go along, even if we have a headache and we love meat. I mean sellers must know where to place the products. However, buying-selling must be a condition in society;it must be profitable otherwise it won’t succeed.

In 2012 you made a national tour in celebration of the 20th anniversary of “Sábanas blancas”, undeniably your most famous song. Can you share with us a special moment during the tour? I want to ask you: those sabanas blancas (white sheets) represent Havana?Are they a symbol of national identity?

I have a thousand anecdotes. I don’t want to talk about one city in particular because in each I had incredible and unique experiences with this song. I always left it for the end (in concerts of about 20 songs), but after the first half hour of the concert there was always a brave voice yelling form the audience: Sabanas blancas! Then, everyone started claiming for that song. I always had to explain it was included in the program and that I would leave it for the end. I could have made a waltz or polska concert and it would be a total success if I sang “Sábanas Blancas” in the end.

I believe this song is about national identity, every Cuban in any province sing it with love and emotion. Whenever I hear them I recall how I felt when I wrote it, it seems it is stuck with the song and is spread as a perfume and people notice it and make it their own. “SábanasBlancas” is my way to get to every Cuban wherever they might be in the worldand I thank them in this interview for their love.

I apologize for making you recall such a painful moment, but Santi passed away and we are aware of your special connection with him. Tell us about that friendship, your complicities and what was left undone with his death…

Santiago Feliú had the gift of having a singular friendship according to his friends’ characteristics, and he was always himself. It may seem a paradox it was exactly like that. Santiago was completely honest; he couldn’t keep secrets so if you wanted everyone to find out about something you just had to tell Santiago. This may seem a flaw but it isn’t. This way no one would speak badly about someone else with him and whatever he would say to you, whether harsh or sweet, you knew it was the truth because, as I said, he was incredibly honest. In him you would find some sort of mirror like Snow White’s, with virtues and flaws, and you could also see his which allowed you to decide whether to take it or leave it. With all his flaws and virtues he was an eternal friend and for that he didn’t have any enemies.

My complicities were not the usual he had with almost all his friends that used to share the sacred weed with him. Santi had a seducing capacity to take everyone he knew to the “Canabis field forever” paraphrasing the “Strawberry field forever” by Lennon. But I have been very stoical in that matter and he never seduced me. So my complicity was in common songs and women. Or in the challenge we launched for the New Trova when we assumed independentlywe had to sing our songs by the piano, when the traditional instrument in this movement is the guitar. And that’s one in a million of the things we left undone, one of the most important: to consolidate an alternative to the Trova songs from the piano, some sort of revolution within the song in Cuba and from there defending auteur songs against from mistreatment and exile.

What did you see beyond the audience that day at the Museum of Fine Arts, which I didn’t have the opportunity to witness?

I realize we only have one life to live and living is to put your soul in peace and that makes you rich enough to live the best you can with others, because we grow up by respecting our neighbors, regardless of his opinions. We don’t get to judge other people’s actions and, as McCartney says: “Life is very short and there´s no time for fussing a fighting my friend”.

Going back to your artistic life, where can we find you at present? Are you performing with your whole band or just a part of it?

I’m finishing mixing the music for a Cuban-German Spanish movie called “La saga de Daniel”, directed by Cuban producer Rolando Almirante. The shooting is scheduled to begin next January. This work will be interpreted in the film by dancers that will perform and sing my songs. It is a musical film and I wrote 14 songs for it. It is a way of retaking musical cinema, which the Cuban audience is so much into. Then, I have a few unfinishedprojects but explaining them would take too long because they are many and I need to synchronize my time to carry them out.

I don’t have scheduled presentations; I do some recitals and activities as they come up. Around these days I am performing with a short format but I keep the full band. Though we all know there is a difficult situation with music and spaces for presentations.

Finally, what can you tell us about future plans, projects, and albums?

Briefly, I still have to finish recording an old album. I need to add voice to 12 songs. It is called “Luna” and it is a symphonic record where I have three beautiful arrangements and prestigious arrangers too.

I am doing my best to record this year a CD with EGREM Records called “La ruta del esclavo”, as the important project by UNESCO. It has to do with race from a historical, mythological, social and artistic perspective.

In addition, I will present a project for the television, a program on music where I will be the director and the host.

I am writing many songs and I aim at retaking the writing of a novel and finish some poetry books. The novel, I hope I can finish it, is entitled “La bataroja” and the poetry books “El sudor” and “La noche cae”. I have all that on the tip of the tongue and the tip of my fingers, but even though I am willing to do it I don’t have the necessary fuel. It’s a m

Once upon a time there was a nice little wolf (II)

The return of the Pro-electronic Festival