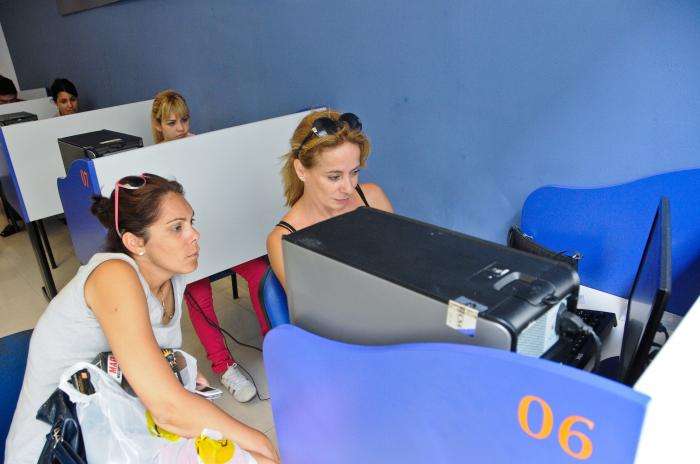 The “extension” of the public service of internet access in Cuba, known as Nauta, celebrated its first anniversary last June 4.

Around this date last year, the national and international press announced the opening of 118 navigation rooms with more than 400 computers nationwide, and thepricesof this service shocked the population who had placed their hopes in the new offer by the Empresa de Telecomunicaciones de Cuba S.A (ETECSA by its acronym in Spanish).

People were eager to stop asking for “favors” –paid, of course– to send an email and to finally get to know Facebook, a popular social network everyone talks about in other places of the world, or Twitter, which is frequently mentioned inTelesur.

The high prices of these services,fortemporary accounts (through non-rechargeable prepaid cards) and permanent accounts (through a minimum initial payment for one hour connection), had an impact on the few Cubans with profiles in the social networks, with blogs or with access to websites in the .cu domain.

Not even the navigation speed, which according to ETECSA’s website is of up to 2 Mbps (Megabytes per second), got so much attention.

Today, one year after the creation of this service, the director for ETECSA’s Institutional Communication, Luis Manuel Díaz Naranjo, agreed to give an exclusive interview to OnCuba and provide some data on the public service of internet access in Cuba.

According to Díaz Naranjo, nowadays there are 146 navigation rooms all over the country (28 more than last year) and 547 computers available and they have activated 249 606 permanent accounts and 558 555 temporary accounts.

The level of access is still low mainly if taken into account that the Cuban economically active population is above 5 million people (about 70 per cent of that figure works for the state sector), who cannot afford this service.

Obeski Moreno Orama, a Cuban living in the US with a couple of twins born in Cuba posted in Facebook: “It was a relieve that my wife could activate this email service in her mobile phone because she doesn’t have internet access. Now I can get her emails and pictures of my children, but sometimes she doesn’t get mine”.

Lisandra Romeo, in Cuba, pointed out that ever since she activated this service she hasn’t made much use of it: “during the day it is almost IMPOSSIBLE but after 11 pm everything is fine”.

By the end of March, 38 667 people had activated the @nauta service at 1.00 CUC per MB(Megabyte), depending on the volume of information in bytes transferred and not on the speed or the time elapsed during the delivery or reception of messages.

It all seemed to be perfect. Its cost was not even a problem because it is debited from the credit in your cell phone and not from the navigation account.

The speed or the conditions of the network weren’t a problem either; however, ETECSA’s limited technological platform, the lack of training of the personnel setting up the phones, the variety phone models this service can be activated on (about 17 500), did generated a lot of trouble nationwide.

There were huge lines for activating this service, busy phone lines that still delay the delivery of traditional messages and difficulties for communicating with the users of this service have been some of the most frequent problems ETECSA’s customers have complained about.

In order to avoid these problems for the users, more than a few self-employed workers started charging between 2.00 and 6.00 CUC for setting up the telephonesright and some witty bloggers like Brown published some tricks for avoiding the inconveniences of this new service.

This is one of their advices: “For making a better use of the credit, we have to be careful with the people we give our email address to, thus avoiding the reception of spam messages such as power points, images, jokes, chains –that of ‘if you don’t forward it within 15 minutes you will die tomorrow’, etc. (I have two or there of those people in my email contact list)”.

ETECSA’s executives acknowledged that the company didn’t expect this service to have such increasing demand in such a short period of time. Engineer Hilda María Arias, Central Director for Mobile Services, explained that “as a collateral effect to the access to the nauta email service, the decrease of international and multimedia tariffsand the projections for the second semester of the year”, the number of users increased from the regular figure of 300 daily requesting the service to 1500.

This implies it is needs to improve its technological platforms, which will begin with the setting up of a new mobile central plant.

For some users this answer is not enough and they are thinking about suing the company, which is not legally possible in Cuba, noted lawyer Raudiel F. PeñaBarrios. He also added that even though Article 655 of the Law on Civil, Administrative, Work and Economic Procedures(LPCALE by its acronym in Spanish)establishes it is possible to legally challenge decisions by organisms from the Central Administration of the State and its provincial delegations, as well as by executive committees from provincial and municipal organisms of the People’s Power, that is not the case for companies offering public services.

“Here is an illustrative example: in view of an illegality by an official from ETECSA, it is not legitimate to take a claim to court, given thata Cuban court will not take a stand in relation to an eventual arbitrary act by the official of this legal entity as it is not considered part of the public administration”, stated an article published in Soy Cuba.

Before the activation of the nauta, this service was only offered for legal entities and foreigners temporarily or permanently residing in the country. The Cuban residential sector was not able to search the web from home.

Some data by the ONE reveal a 25 per cent of internet penetration in Cuba for a population of 11,2 million inhabitants in 2012. By that time the country was immersed in total disconnection, but, with the “expansion” of internet service in June 2013, these figures went up.

For now, while we wait for those numbers, what do you wish nauta on its first anniversary?…

The return of the Pro-electronic Festival