The event will be held November 16-21 at the Karl Marx Theater in Havana, “and its competitive nature will help find talented performers and composers on the island,” according to Jorge Luis Robaina, general artistic director of the event. 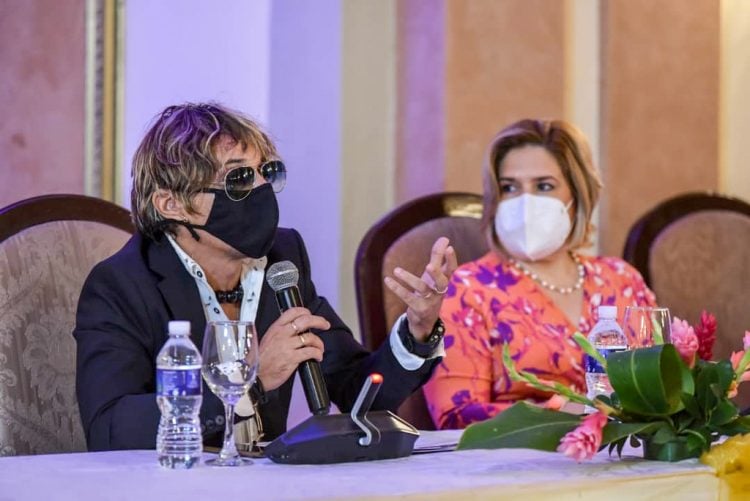 Jorge Luis Robaina, general artistic director of the San Remo Music Awards Festival in Havana, together with Lis Cuesta, coordinator of the Events Committee of the Ministry of Culture. Photo: acn.cu

The prestigious Italian San Remo Music Awards (SRMA) Festival will have its first Iberian-American edition in Havana next November, announced this Wednesday Jorge Luis Robaina, general artistic director of the event and representative of the brand in Cuba.

The event will be held November 16-21 at the Karl Marx Theater in Havana, “and its competitive nature will help find talented performers and composers on the island,” the musician and leader of the group Karamba told the press, quoted by the Agencia Cubana de Noticias (ACN) news agency.

Italian singer Fiorella Mannoia and fashion designers Fausto Sarli and Renato Balestra confirmed their participation in the festival, according to the source.

Through an online conversation, the SRMA sponsor, Nicola Convertino, said that thanks to the event “bilateral business relations between our countries and socio-cultural exchanges and philosophies on life can be further strengthened.”

The Italian businessman affirmed that the island sentimentally is a very close country, and recognized its cultural potential, with artists of recognized international prestige. He added that he was satisfied “with the professional and coordinated work that our representatives for Iberian-America and the Organizing Committee of the San Remo Music Awards in Cuba,” according to the ACN.

For her part, Lis Cuesta, the coordinator of the Events Committee of the Ministry of Culture (MINCULT)—wife of Cuban President Miguel Díaz-Canel—said that the country’s cultural authorities “embrace the initiative because Cuba has extensive experience in several aspects.”

“Our culture is what we are going to relaunch to the world and it will be very good for tourism, for our friends, solidarity, for everyone who is committed to looking towards the island,” Cuesta added.

In addition to the musical contest, during the Havana edition of SRMA there will be a fair for business professionals from different trade sectors, a Cuban-Italian culinary culture contest, and fashion shows.

The festival is organized on the island by the Music Recordings and Editions Enterprise (EGREM), and is sponsored by entities such as MINCULT and the Cuban Institute of Music.