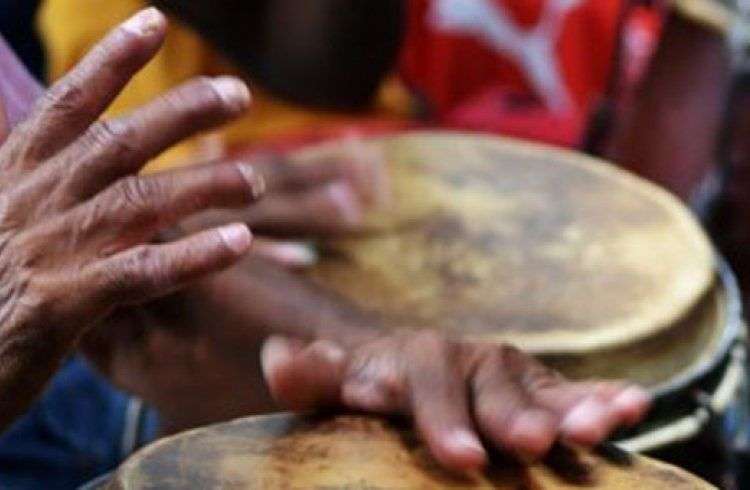 Timbalaye is a young band (of about seven years and only two of its members are professionals) facing rumba with a style of their own that has provided them in short notice considerable results within a genre with lots of high quality exponents in Cuba.

The band took its first steps with the album Se partió el bate (We hit the jackpot), opera prima that assured them the 2014 Cubadisco Award in the category of folkloric music, according to specialists this is one of the toughest categories.

Se partió el bate… pays homage to great rumba figures of all times, but specially to the rumba from Matanzas province, which is latent in Benigno Echemendía’s guaguanco: Los Muñequitos de Matanzas; though, as pointed out by Nelson Lopez, the director of the group, the album has a lot to offer because “we have combined rumba from Matanzas and Havana, which makes it more complete from the viewpoint of its genre”.

The album not only includes guaguanco, yambu and columbia, the main rumba styles, it also comprises express influences from Abakua (in Cantando en el valle) and Yoruba (Columbia te traigo) cultures, which convey the traditional relation between rumba and African rituals.

However, for Nelson, the main success of this album is the constant dialogue of the rumba with contemporary sonorities, particularly with Cuban popular dancing music and the diversity of approaches achieved from the thematic point of view thanks to the variety of its authors.

“This relation is manifested in the use of the language, the singularity of topics and the way we have mixed rumba with characteristic elements of timba, salsa and reggaeton”.

The origins of the band play an important role in this regard. They come from Juanelo, a neighborhood in the municipality of San Miguel del Padron in Havana, a popular square for rumba in the capital. Timbalaye, as every rumba band, comes from neighborhoods, which preserve this tradition in its purer state in the country.

“The first purpose of the band is to stand out from the work carried out by other rumba bands in Cuba. Since the beginning we aimed at having a unique sound to gain ourselves some space within this genre, which regardless of its diversity maintains its variations. We decided to open up its scope by bringing in elements from popular dancing music in our own way of making rumba, so fusions have been included in the album on purpose”.

“While the rhythm in rumba is marked by the clave, we worked on the basis of a more open structure instrumentally speaking. We make them sound louder for the voices and choirs to step in, for changing the choir we give more or less intensity to percussion instruments always keeping in mind all that can change depending on what happens when we are on stage”.

The band already has its own sound and even though its 16 members still have a long way to go, they agree they still have a lot of work to do for their evolution. We have made great accomplishments from the first album till now, said its director. “I think we could make it better if we would record it again, but I would keep the same line of work we developed in Se partió el bate. It has a lot to do with who we are and regarding the lyrics and the music”.