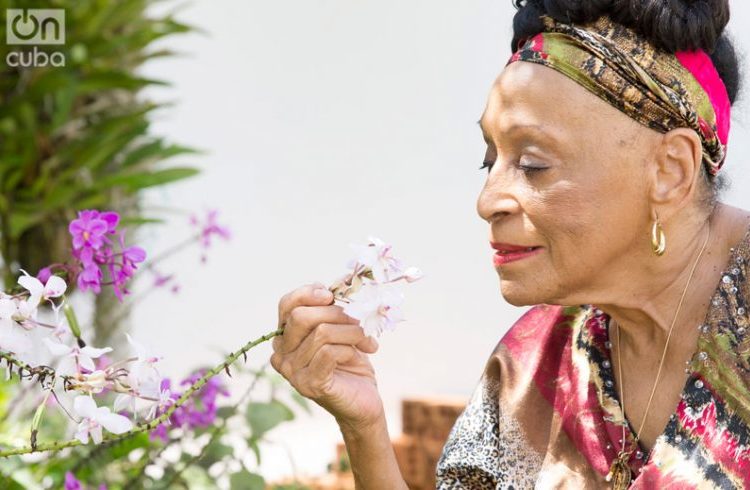 The life of Omara Portuondo tells part of the history of Cuban music. She captured the intensity of Havana nights during their reign in the birth of the feeling with the D’Aida Quartet, she turned the famous Tropicana Cabaret into her own paradise before a public that could not take their eyes off of her when she interpreted those songs full of glamor and hopeless loves, and she installed herself in the front row of the revival of traditional music with the Buena Vista Social Club.

At 86, Omara has a ritual that accompanies her like a religion. Every morning she looks at the seaside drive from her apartment and she takes the sun if “the agenda allows it.” “On the other hand, I don’t smoke, I don’t drink and I always try to take care of my health,” commented to OnCuba the so-called Bride of the feeling, a title she earned during her long seasons in clubs, cabarets and any place that allowed her to sing those songs that have become live chronicles of bohemian Havana.

Omara, living legend, does not feel the stabs of nostalgia. She has lost close friends, she has had to reinvent herself several times, and she hasn’t been able to avoid shedding a tear in the middle of a concert remembering Elena or Moraima, comrades of adventures in the D’Aida Quartet.

However, she has prevented the passage of time to weigh over her career like a tombstone and she has continued touring the world, making recordings and collaborating with the island’s young musicians.

“I miss the quartet (D’Aida), the persons who are no longer here, the music from that period, the wonderful atmosphere, with so much feeling. But I think it served to leave a great musical legacy. I, for my part, continue working with very talented young Cuban interpreters,” says Mr. Portuondo, who first dreamed of being a classical ballerina, and didn’t achieve it because they didn’t “accept blacks in ballet.”

She has made more than 30 records, won her first Grammy in 2009 and, after spending several decades working as a soloist, her name went around the world as The Diva of the Buena Vista Social Club.

“I don’t believe the Buena Vista…wasn’t valued in Cuba, but it was better known and successful in the rest of the world,” she recognizes when I asked her about the enormous popularity won internationally together with other glories of Cuban music, like Ibrahim Ferrer, Rubén González, Compay Segundo, Pío Leyva and Barbarito Torres.

Omara affirms that her career is at a good stage. And she explains: “This year I made a recording, in addition to having made collaborations with other artists whose records are nominated to the Latin Grammy awards. But I also continue touring several countries with my group.”

What project of your career in recent years have you liked the most?

All the projects are interesting for me. For example, it was a great pleasure to have worked with Maria Bethânia, being the only female voice of the well-known Buena Vista Social Club, having recorded this year with Natalia Lafourcade, working with Roberto Fonseca. In addition to making my latest record with Chucho Valdés and some more recent ones, like my presentations with Diego El Cigala and Spanish singer Martirio.

What stage in your work is defined by that record you made with Chucho Valdés in 2011?

Y have made two records with Chucho, each one at the time when we have had the opportunity. I don’t think they define a stage, I believe that recording together was an excellent idea because we both enjoyed it a great deal. Chucho is an excellent musician who inherited the talent of his father Bebo Valdés, whom I also admired and dearly loved.

How has it been for you to be a woman and to defend your music on Cuban and international stages?

Being a woman hasn’t prevented me from doing what I do, which is singing, at times it hasn’t been so easy, but what’s important is that I have been able to take our music to many corners of the world.

What are you working on now?

I’m still singing, I have given concerts in Peru, Colombia, now I’m returning to Mexico, after that to Brazil and, of course, in some places in Havana like the Hotel Nacional. I made a record this year with the EGREM record label, musically produced by Alain Pérez, which has still not come out. With Sony Latin Music I also recorded as a duet a theme with Julio Iglesias. Soon we will also be inaugurating a space which boils down to making one of my dreams or old desires come true, called La Covacha, It will be a small stage in the midst of a very Cuban atmosphere where we will be able to enjoy nights of singing, accompanied by a select gastronomic offer and bar, some of them inspired by my own taste.

What do you regret?

Do you have time to listen to music between so many commitments?

Every time I can I watch the musical programs.

With which Cuban musician have you felt most identified?

Is there a Cuban singer that reminds you of your passage through the D’Aida?

None specifically, although there are many good talented young singers, but I do encourage the new generations to study and to better themselves, since they have the opportunity to do it, which I didn’t have because I was poor, despite the fact that I would have greatly liked to learn how to play the piano and give singing lessons.

What are your expectations about your next tour with El Cigala?

Once again I have been invited by him, who has a very particular style and beautiful voice. We already did a successful tour of Europe last year, I hope that these concerts in Mexico will not be less and that the public receives them with the same love and respect with which we will give them.