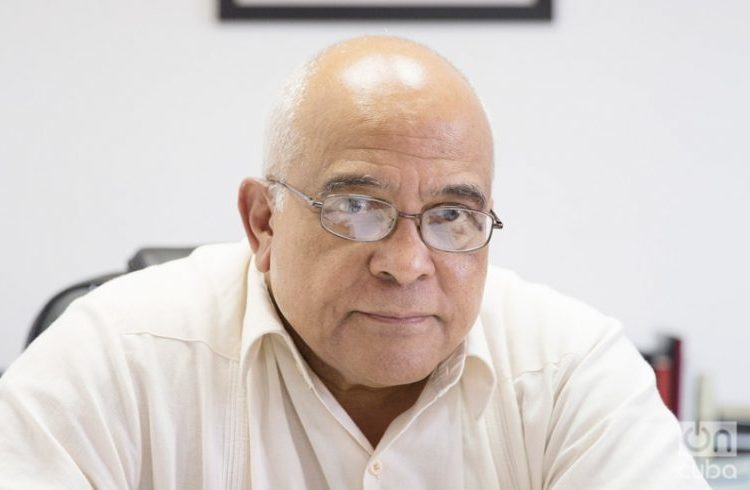 Orlando Hernández Guillén, president of the Cámara de Comercio of Cuban Republic and member of the Organizer Committee of FIHAV. Photo by Gabriel Guerra Bianchini.

The Havana International Trade Fair (FIHAV) will be celebrating its 35 years and has become Cuba’s and the Caribbean’s principal commercial market. It is also an indispensable platform to promote the island’s economic potentials and to attract the foreign investment needed for its development.

Regarding the peculiarities and perspectives of the fair, OnCuba spoke with Orland Hernández Guillén, president of the Chamber of Commerce of the Republic of Cuba and member of FIHAV’s Organizing Committee, about its 35th edition.

OC: How has FIHAV evolved in its 35 years of existence and which are its expectations for this 2017?

OHG: FIHAV is an event that has been evolving in time. It can be said that in its 35 years it has been a reflection of the evolution of Cuba and its economy. It began as a small fair in the Convention Center, and afterwards it went on to other locations like Pabexpo until it got to ExpoCuba, which has a much bigger area, and is where it is held at present. This increase in its exhibition space has been accompanied by a growing participation of foreign delegations and confirms the importance the event has gained on an international level.

The 2016 edition was very satisfactory. It was a fair with higher dimensions than those previously held, more than 3,000 companies participated and it was able to create a very positive business environment. We hope that this year it will again be as or more successful and that it confirms the international community’s interest in the Cuban market. There will be 70 or more participating countries; the entire exhibition area will be taken up and we will have the presence of delegations presided over by high-ranking officials. Representations of different Chambers of Commerce will also attend, which will be a very important moment to exchange with colleagues and businesspeople, to think of actions for the promotion of commercial relations.

OC: The second Foreign Investment Forum will be held in FIHAV 2017. What experiences were gained from the first edition?

OHG: The first forum was a success. More than 200 participants registered, with a program of interviews previously organized according to their interests to negotiate an investment project. This made it possible for potential investors and businesspeople interested in exploring the investment possibilities in the country to meet directly with the Cuban enterprises in charge of investment projects that were included in the Opportunities Portfolio, or different others not included in it.

This Portfolio of Projects reflects Cuba’s priorities in the sphere of foreign investment, and in the last forum, for example, projects were strengthened that were linked to food production, the tourism sector, the pharmaceutical industry, mining and the production of energy, especially renewables, which are areas that can further revitalize their development with the participation of foreign capital. Many of those projects are already in the process of negotiation or have been concretized.

The new Portfolio will be presented in this edition of FIHAV and it will have more than 450 projects, a higher number than the one for 2016.

The first edition also left us as an experience the need to use technological supports that help the forum be more efficient, to better concretize the interviews and for participants to be able to better identify their interest. This year we have worked on these details, and we expect to continue introducing improvements so that the event’s organization will be increasingly better.

OC: What space does the Mariel Special Development Zone (ZEDM) have in FIHAV? What is the current situation of this important economic enclave?

OHG: The ZEDM was launched at the fair four years ago. Since then it has had its own space in the Cuban pavilion, thanks to which contacts with numerous foreign companies have been brought about. In addition, the ZEDM projects are particularly identified in the Opportunities Portfolio and in the context of the Investment Forum a presentation is made with the aim of favoring the presence of foreign investors interested in establishing themselves in it, taking advantage of the fiscal benefits and other conditions offered there.

However, the ZEDM is not just a very important actor in FIHAV but also for the Cuban economy, and its projects are a sign of how the country is advancing in the participation of foreign capital. During 2017 five new projects were brought to fruition, with which the number already surpasses 20, and the aim is that they continue growing.

OC: What is the policy on the Cuban private sector in FIHAV?

OHG: The representatives of the private sector in Cuba are very clearly recognized in the conceptualization of the Cuban economic model as a sector with an important role in certain productive areas and services. But for FIHAV the principal objective is to strengthen commercial relations and foreign investment, and at present the Cuban self-employed don’t export or import, nor are they associated to foreign capital. Those non-state workers and cooperative members, however, participate in national fairs organized so that all the country’s economic actors have better knowledge of their activities and can identify possible relations. FIHAV is not conceived for the production scale or of the supply of services the non-state sectors is offering today. Its future presence will depend on the evolution this sector has in the country’s economic context.

OC: What is FIHAV’s position with respect to U.S. participation? How could the recent measures of the Trump administration have an impact on commercial relations between the two countries?

OHG: As FIHAV’s Organizing Committee and as Chamber of Commerce, we maintain our doors open for U.S. companies to be present in the fair, so that they work and can materialize their interests in Cuba. We are pleased that despite the measures taken against Cuba by the government of President Trump, U.S. companies and institutions maintain the will to participate in FIHAV and contract spaces in the fairgrounds.

On the other hand, it’s impossible to not be aware that the climate of rapprochement that existed during the mandate of President Obama is no longer the same. And although businesspeople continue coming there are factors that discourage, that restrict the taking up of new businesses and investments. But even without that favorable climate, business was carried out between the two countries in the past and it should also be recalled that after Donald Trump’s speech in Miami there were statements by U.S. businesspeople, politicians and commercial institutions in favor of maintaining and increasing relations with Cuba.

For our part, we reaffirm being open to doing business with U.S. companies and as Chamber of Commerce we will continue promoting their ties in Cuba and creating the conditions so they can get to know the Cuban market. We hope that despite the current context favorable exchanges for both countries can be carried out.