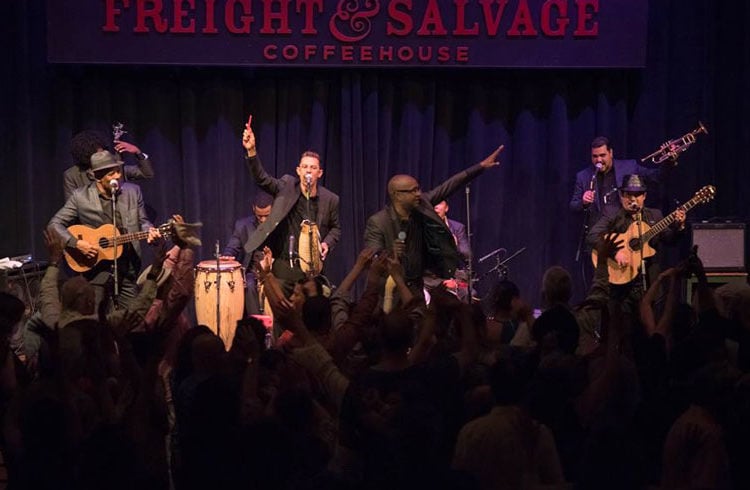 “A dreamed of tour,” says Fernando Dewar, director of the Septeto Santiaguero, when I asked him about the artistic tour that his group concluded just a few days ago through the United States.

“It was very intense because we toured the country from coast to coast in three weeks,” Dewar said to OnCuba, “and at the same time it was very important because we played in many big cities and this allowed us to enter with the right foot in the U.S. market.”

The principal goal of the tour, organized by the Freshen Up Arts Company, was the promotion of Raíz, the Septeto’s most recent record. The album, recorded in Cuba by EGREM and licensed for its circulation in the United States by Los Canarios Music, had an official release in New York’s Joe’s Pub after the one in Havana three weeks before.

In addition to the Iron Babel, the “Santiaguero” musicians performed in Chicago, Cleveland, Minneapolis, Los Angeles and San Francisco, among other cities. They gave a total of 17 concerts in 15 cities, on closed stages as well as in open-air ones. They all had a common denominator: the public couldn’t resist “moving their feet.”

“We are very happy because of the way the people assimilated our repertoire in the United States, because of how they danced to our themes, because we don’t do pure traditional music, in the style of Compay Segundo and the Buena Vista Social Club, but rather with more contemporary elements, more directed at the dance part,” the director of the Septeto commented.

For Dewar, the renovation that their music proposes “respects the essential part of the son” and that favors its reception. Important newspapers like The Washington Post and the Los Angeles Times did not overlook their musical proposal.

“We make an effort for our mixtures and incorporations to always respect the musical essence of the son,” he says to OnCuba, “that they have a foundation based on the aesthetic point of view for the people to assimilate them well. We are very careful in that sense and I believe that greatly helped the reception of our music in the United States. The people danced pretty.”

The tour’s repertoire reflected the genre variety of Raíz, which in turn is the one defended by the Septeto Santiaguero: bolero, son, changüí, danzón. “But the strong point was always the dance son,” he explains, “and the public responded very well, they got up to dance although many were not Latinos; that encourages us a lot. Seeing those plazas full of people, lifting their hands, was phenomenal. In the last concert, in San Francisco, the public got up right from the second theme. It was a very moving closing act, ideal for what happened in the tour.”

Dewar especially highlights the reception that themes like “La meneadora” and “La fiesta no es para feos” got. “They are anthological but we have given them a fresh, contemporary sound, and many people believe they are recent compositions. And there’s the case of ‘La rumba está buena,” which is the union of a completely traditional changüí and another more current, ‘Changüí clave,’ by Elio Revé. People liked this theme so much during the tour that we had to include it in the repertoire and we started using it to close the concerts.”

However, during the U.S. tour Fernando Dewar and his boys not only interpreted themes from the record Raíz. They also had to please dancers with themes from their previous album, No quiero llanto, Tributo a Los Compadres, winner of a Latin Grammy Award, which they shared with Dominican José Alberto “El Canario.”

“There are themes from that record that are already a must in the concerts,” the also tres player of the group confirmed. “They are very dear to us and will always be part of our repertoire.”

SEPTETO SANTIAGUERO FOR QUITE A LONG TIME

The Septeto Santiaguero is not a classical septet. In fact, it actually is no longer even a septet after the incorporation of an eighth musician. But that doesn’t deduct value from its name or its music. On the contrary, it consolidates a sound that many compare with that of a band.

“We are heirs of the Melodias de ayer group, which logically had more instruments, and that inheritance remained for us,” says Dewar. “We always felt that in the percussion set we couldn’t get all the sound we wanted, that ideal combination with the bass, with the strumming of the guitar, with the ‘tumbao’ of the tres, and by incorporating a conga drum player the sound becomes stronger, more round. In the end this favors the dancers, because they follow the rhythm, and by strengthening the percussion the rhythmic part is favored and the group’s sound is consolidated.”

Another important element for the Septeto is its stage projection. It is far from being a stiff, timid and impassive group on stage. “To make others’ feet move,” says Dewar, “it’s difficult to not move ours.”

The U.S. tour was a test of fire. Their gestures, like their music, were key to summon the dancers who frequently didn’t speak Spanish.

“The public appreciated it a lot,” affirms the group’s director. “That the singers move on stage, that they seek the participation of the public, that they encourage the people and make them get to their feet, move their hands and dance, this is always well received. However, we keep in mind that what is most important is the theme as such, the text, the well-played music, and only afterwards does that interaction in the concerts come about. The fundamental part is that the people hear the proposal, assimilates it and enjoys it, as we believe happened now.”

1. A moment of the U.S. tour. Photo: Courtesy of the Septeto Santiaguero.

2. A moment of the U.S. tour. Photo: Courtesy of the Septeto Santiaguero.

3. A moment of the U.S. tour. Photo: Courtesy of the Septeto Santiaguero.

This is the Septeto Santiaguero’s first tour of the United States, but it had already performed on U.S. stages. In 2016 it performed in New York’s Lincoln Center and this year they returned to the Big Apple, in addition to performing for the first time in Miami and New Orleans.

“The United States is a very important market for music, in which we are interested in staying,” Dewar affirms. “But we are also interested a great deal in consolidating the markets we already have, like the European. Although we were in Madrid in October, it’s been a while since we’ve made a European tour and now we are preparing one for 2018 to retake this market that represents a lot for us.”

In the meantime, the leader of the Septeto Santiaguero confirmed its presence next month in Colombia, in the Medejazz Festival.

Although he prefers to not advance their next record productions, since he affirms that the group is “totally concentrated” in the promotion of the record Raíz, Dewar announced the making of the video clip of the theme “La fiesta no es para feos,” with the collaboration of the Santiago singer known as “El Médico.”

Their previous clip, “La meneadora,” has climbed positions on the hit parade in and outside the island.

In addition, Fernando Dewar confirmed the intention of organizing a new son event in Santiago de Cuba, starting February 2018, with the backing of the EGREM recording house.

“We want to call it ‘The Days of the Son’ and to hold it during a weekend. The idea is not to make another son festival, because there’s already one in Santiago and it wouldn’t make sense, but rather to highlight the importance of this genre in Cuban music, its influence in other musical expressions. We want those expressions to be present in the festival,” he explains.

Meanwhile, the Septeto will continue its usual performances in Santiago de Cuba, awaiting a national tour that still has not been concretized.

“But no matter if it’s in or outside Cuba,” Dewar concludes, “we will continue defending Cuban music. There’s Septeto Santiaguero for quite a long time.”