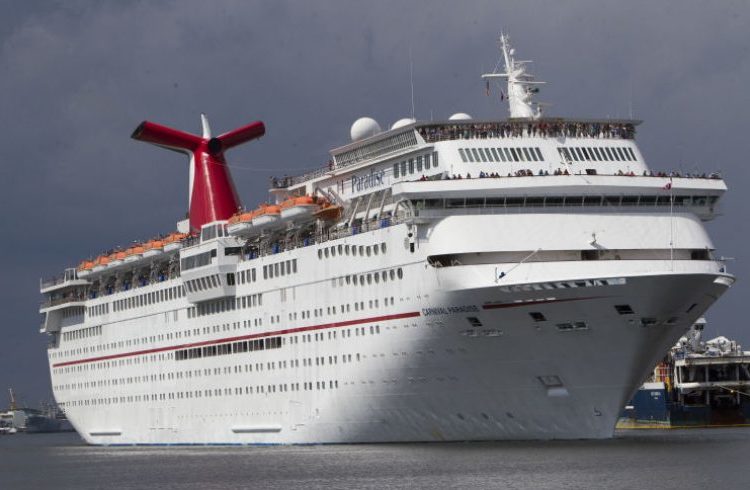 The Carnival Paradise on its inaugural trip from Tampa to Cuba. Photo: Monica Herndon / Times.

The journeys will always be on board the 260-meter-long Carnival Paradise with capacity for 2,052 passengers.

Our cruises to Cuba have been very well received and we are delighted to offer our guests additional opportunities to experience and explore this fascinating and coveted destination, said Christine Duffy, president of the Carnival Cruise Line, according to what John Heald, cruise director of Carnival Corporation, posted on Facebook.

Three of the tours will comprise five days with a one-night stay in Havana, starting February 17, July 2 and September 5, respectively, USA Today explained.

The fourth trip, lasting six days, will begin on August 26 and will have the same one-night stay in the Cuban capital. The last of the journeys will last eight days, with two in Havana, and will start on August 18.

Tampa is the third city in the United States with the largest Cuban community, more than 80,000 persons, according to the 2010 Census, after Miami and the metropolitan area of New York-New Jersey and Connecticut.

The Paradise was the first to travel from Tampa to the island last June 30 in more than 50 years. It has been sailing for Carnival Cruises Lines since 1998 and belongs to the Fantasy class.

On that occasion Arnold Donald, CEO of the company, commented that they were pleased to again have the approval to sail to Cuba and that on that occasion it was for their brand by the same name. He also said that he was moved because of being on the island, which he described as one of the most coveted destinations in the world.

Carnival Cruise Line is the largest cruise operator in terms of transported passengers per year, which represents approximately one out of every five cruise vacations in the entire world. It plans to transport five million persons in 2017.

In May 2016 Carnival became the first U.S. cruise company to travel to Cuba in more than 50 years, with its Fathom brand Adonia cruise ship.

After the start of its journeys to Cuba in 2016, other U.S. companies were authorized. Pearl Seas was the second to arrive and in the case of Norwegian Cruise, it is the only company from that country, until now, with the approval for all its brands to travel to the island.

Norwegian started sailing to Cuba in March and until the close of June it had made 11 trips that included a stopover in the Cuban capital.

In 2016, for the first time the island surpassed the four million tourists, of which 100,000 arrived on cruises. For this year it expects some 4.7 million visitors, including 370,000 on cruise ships.

The journeys to the island by the principal U.S. cruise companies will represent more than 420 million dollars in incomes between 2017 and 2019, according to a projection by the U.S.-Cuba Trade and Economic Council.

Americans have not lost the desire of visiting Cuba, despite the announced restrictions in relation to the possibilities of traveling and doing business with the island, even though they do not include trips on ships.

According to specialists on travel to Cuba, cited by the Sun Sentinel, business continues being strong awaiting the definitive regulations that should soon be announced.