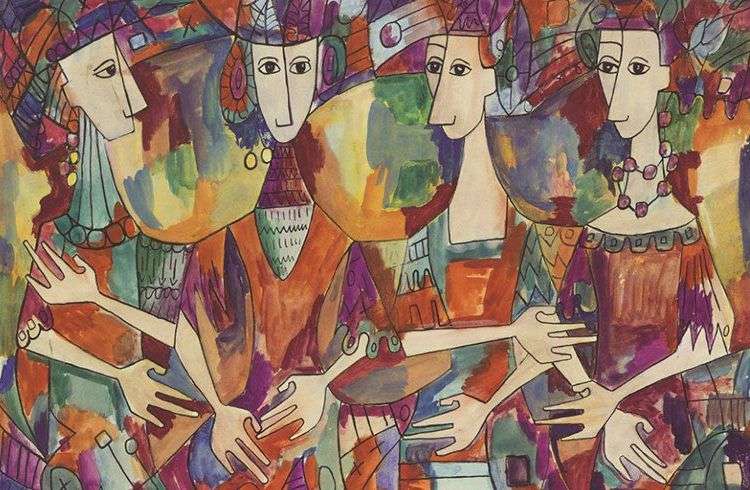 Cundo Bermudez is considered to be the last master of the Cuban vanguard. He has recently returned to Cuba along with his valuable work. The Cuban Art National Museum of Fine Arts will exhibit, till October 13, a comprehensive sample by the title of Pasion and Lucidez, on the occasion of the 100th anniversary of this artist who was born in Havana in September, 1914.

Twenty five pieces finished between 1940 and 1964, in small and medium formats andwith different techniques make up the sample. They are complex and simple at the same time. Portraits related to his frequent motifs in watercolor, tempera, acrylic and oil over cardboard, wood and canvas can be appreciated by Cubans and they can get the feeling of observing the work by a contemporary artist, who has recently emerged, due to the lack of promotion this internationally famous painter has had in Cuba.

This, the first big exhibit in Cuba of the works by this prominent artist, was described as a historical rescue by its curator Roberto Cobas. “Cundo deserves the validity and strength of his pieces be appreciated by the critics and the public. He must be placed at the same level of Mariano and Portocarrero. He participated in the mythical exhibit Modern Cuban painters at the Museum of Modern Art in New York, and the criticism from that city was favorable”, noted the specialist during the opening of the exhibition.

Most of his genuine and important pieces are abroad, mainly in the US, where he migrated to by the end of the 60’s. Though this is the first exhibit organized by the Museum of Fine Arts on this artist, he is represented in the permanent collection of the museum due to his worth in the history of Cuban art.

He was part of the second generation of vanguard painters. He found new ways to capture anecdotes by mixing classic and popular art elements. In his characteristic speech he caught the essence of music and its exponents, one of his favorite subjects in several stages of his life. His mastery in the use of color through monochromatism and its degradations, along with portraits of human stylized figures in baroque environments characterized his work.

He used to say he was a happy artist: “I have fun painting. Enjoying my work is essential for me. My job is as joyful as Mozart’s. To me painting is the celebration of shapes and colors”, stated in 1989 the artist whose works are treasured in important private collections in different regions of the planet.

In 1942, renowned critic José Gómez Sicre said about him: “Without imagination we are incapable of getting close to Cundo’s work and appreciate it. Cundo has to be observed with the spirit of a free imagination”.

One of his great friends, Mexican muralist David Alfaro Siqueiros, pointed out: “Cundo Bermudez is boldness in plastic arts. He knows how to build in synchrony. Paradoxically, he builds and organizes, almost miraculously sometimes, with shades and first plains in pictorial deepness. I think this artist has been very important in the chromatic field of modern Cuban painting”.

In Cuba his work can be appreciated permanently at the Riviera and Habana Libre hotels, though it hadn’t been officially exhibited since the 50’s. It is worth mentioning the high prices his pieces have reached in auctions and similar events during the past few years.

Regardless of the fact he never returned to his homeland, it was present in every line he drew in his paintings. “I long for Cuba and sometimes I feel as if I had never left. I never see strange places, I always find myself in Cuban streets”, he noted in 2004, four years before passing away in Miami.

Roberto Cobas, curator of the exhibit, described it as a historical rescue.