marita
in Technologies of Communication and Media
0 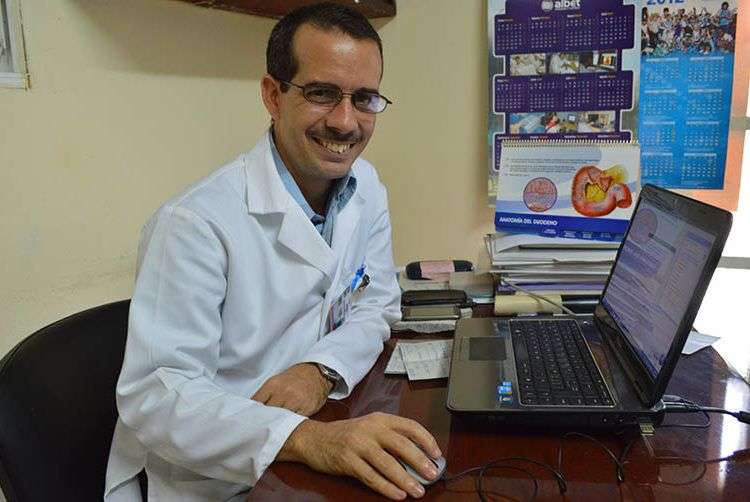 Last week some news on the first Cuban software on health, which is freely distributed on Infomed’s website, hit the medical community in Cuba. The “brain” behind the National Medicines Glossary, available for Android, is a 38-year-old doctor, a gastroenterologist from the National Gastroenterology Institute (ING by its acronym in Spanish), who happens to be an amateur on informatics. His name is Oscar Villas Jiménez and he tries to solve every medical issue with algorithms.

Since college he realized of the opportunities computer science has to offer and he devoted himself to the management of data bases. At that time he developed his first software. When he entered the Medicine School he created the website of that institution and later on did the same for the first Cuban medical mission in the world: Haiti.

Before graduating he designed the Perinatal Mortality Committee (CMP by its acronym in Spanish), back in a timewhen the data collected in 20 years on that category nationally could be saved in a single floppy. He was also the first assistant student at the Center of Cybernetics applied to Medicine, the guiding center on medical informatics in Cuba.

When he started at ING, reports were done on a typing machine and a lot of information was lost. Besides, it was hard to process and obtain useful conclusions for future diagnoses and medical procedures. Then ProGastro emerged. It is a program for computers, which has been welcomed by specialists and solves several problems of interpretation of the data. That was seven years ago. Today, he proposes a tool for mobile devices that is entirely Cuban and is the first of its kind in the country.

How did you come up with the idea of developing a software on the National Medicines Glossary?

There is a belief that doctors only review books for rectifying doses or when they have doubts about something. However, every health professional in the worldhas over their bed a doctor’s medicines glossary, and they study interactions by medication, among other things. Here we have a printed glossary and a PDF version published on Infomed.

Whenever professionals need to consult it, it is really hard to access from their offices. We are also aware of connectivity difficulties in Cuba. Therefore, this software would be a solution so that every doctor can access the information he needs for medical prescriptions and medicines available in Cuba, their introduction, dosage and contraindications. Furthermore, it can be used without any connection to a net.

Since the beginning I had the support of the Ministry of Public Health, especially of Patricia Alonso and the authors of the Glossary, who provided us with the data base. My nephew was in charge of its design and my wife, who is a journalist, reviewed the texts. I would never charge my country for anything and I don’t waste my time doing things that already exist. Whenever there is a problem or I realize we need something I try to look for solutions based on my knowledge on informatics and that’s it.

What other possibilities this software has to offer?

The software includes a search engine that makes easier finding terms and it marks them on red. Besides, there is a menu that includes Risks categories during pregnancy and breastfeeding, a Help section and the credits of the software.

The design favors interactivity. It has four main buttons, by clicking on the first one you get a full index of all the medicines existing in Cuba, and it is arranged according to different categories: introduction, alphabetical order and different risks for pregnant women, children and the eldest, among others.

The second button provides plentiful information on medicinal plants very useful in traditional or “green” medicine, alphabetically arranged by their common names in order to make the search easier.

There is also a section in which users can place under the category of “Favorites” the meds highlighted with a little star on their right. It allows comprising elements frequently used for easier access.

The last button is used as a scanner identifier, very useful when patients show doctors the case of the medicine with the bar code. By scanning that code doctors can access the information about it. Unfortunately, I had to type all the codes included in the software because so far we haven’t been provided with a data base with all the codes. We also have some issues with the icons of the medicines; we have not been able to get them. We hope BioCubaFarma can help us with that considering the impact of the software.

Yes. In less than a week we have received many suggestions in that regard. For now our plan is to make a version for Windows and improve the beta version for Android. The updates will be downloaded from Infomed’s website, where they will be available for free for everyone. Many internationalist doctors already have it on their cells. We even got a request to include it in the digital television.

It is worth mentioning that the target audience of this software is specialized health personnel, though the general public can use it to improve their knowledge. It must not be used as an alternative; it is a must to get the doctor’s opinion and professional prescription.

Not all Cuban doctors have smart phones or tablets. What do you think the real impact of the software will be?

Probably not many doctors have one of these devices but this is the age of technology and our doctors abroad can have one of those. Others do have it and can use them for work. In addition, there are a large number of foreign residents who own this kind of technology. I think the application will gradually spread through the medical community.

I assist patients who suffer from celiac disease, that is, patients who are allergic to gluten and cannot have any product made with flour. That poses a serious problem in their diets because products rarely specify whether they are gluten-free or not. Then, I’m thinking about creating a data base of gluten-free products available in Cuba. For that, I need the support of other levels because it is hard to access the information and dedicating free time to developing such useful alternatives for improving medical assistance and patients’ quality of life. That would be a dream come true for me. I’m also preparing for a PhD degree on gastroenterology and informatics. It is a new endoscopic classification I would like to propose. I cannot give you any other details; perhaps in another interview.

In Cuba, cheeses of the French multinational Lactalis