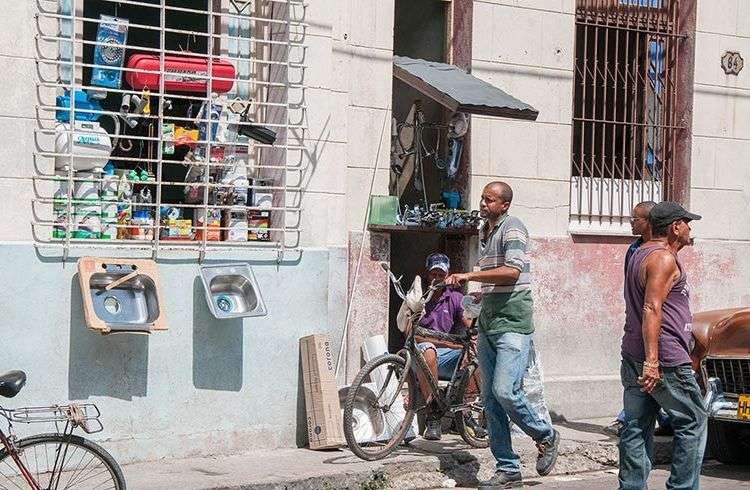 The Cuban press has set its crosshairs on resellers as if it were a story, as if only now they seem to realize that there is a black market dealing in every corner of the country with everything that can be sold there.

In the report of the national television news they have even hinted that even some employees of state stores are buddies with the hoarders. They discover that thanks to the complicity of the shopkeepers the black market caters largely.

They swim on the surface, touch the effects without daring to penetrate the causes of a problem that has dragged on for decades due to a chronic shortage of products ranging from screws to mopping cloths.

During the early years of the revolution shortages could be attributed to the United States embargo, but today Cuba has trade relations worldwide and can purchase the products people need in other markets.

It doesn’t even seem there is a financial problem because the products are there and disappear intermittently. The shaving cream can completely disappear for a couple of months and overnight reappear in all stores.

These fluctuations are what allow a group of street-wise people to hoard and resell after a little these products over priced. It is the lack of foresight and planning when importing what causes these bumps that facilitate the activity of hoarders.

No doubt that Cuba has a planned economy; the problem is whether it is well planned. Indeed, for decades, there is a chaos in the internal trade that has never been ordered even minimally.

On these days, a colleague from the foreign press noted that in the same time when the toilet paper disappeared from shops, a Havana supermarket was offering cans of pickled partridge nobody buys.

Who decides to buy these luxury canned items in a time when the store shelves are almost empty? That story is too much of a reminiscent of that of a staff member who imported to Cuba a machine for clearing snow.

The internal trade system doesn’t require a “model updating” but a radical change, a new model. They must start with the importing companies, bureaucratic entities that ignore the interests of consumers and buy without rhyme or reason.

Many employees receive commissions from suppliers so they do not prioritize national interests but those of their own pocket. They were paid by those corrupt foreign businessmen recently tried and sentenced to jail.

To plan they should start by doing market research, know the needs of consumers and making purchasing decisions from there. It is about purchasing products that people need and in amounts commensurate with demand.

Planning means be able to organize imports cycles so that there is a fluid supply, without black holes like that abound in the domestic trade of Cuba on any item you think of, from milk to wood.

Sometimes that chaos has high costs for the economy as when buses are stopped because they didn’t buy the parts on time, wood for boxes to harvest crops gets scarce or a sugar mill is stopped for lack of foresight.

Even in the sale of school uniforms, at state-subsidized prices, unrest is created by the lack of sizes. One problem that the shopkeepers are always ready to solve by charging the child’s parents an extra bit of money.

And amid all that chaos is the Cuban consumer, who does not even have an Office where to claim their rights when they buy rotten meat mince, a pair of old shoes or a refrigerator dripping water.

Certainly speculation is a despicable activity but is not the cause of the black market. You may start a new campaign against hoarders but you will not be more successful than previous until an efficient trading system is created.