This graphic artist often resorts to the past to talk about the present. 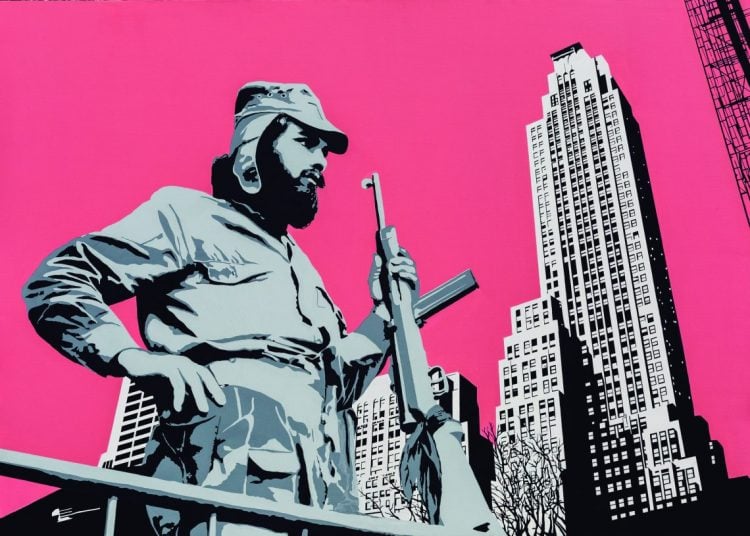 Jorge Rodríguez Diez (R10), one of the most representative contemporary Cuban creators, demonstrates artistic diversity while escaping clichés and common and recurrent topics in our visualization.

The work of this graphic artist finds inspiration in the posters from different epochs and parts of the world. He drinks from these sources but maintains his vintage style, supported by typographies. His refined, firm lines and contrasting colors are one of his distinctive signs.

R10 often resorts to the past to talk about the present. The female figure ―another of his constant features― perhaps a tribute to the pin ups or to the protagonists of the 1950s advertisement, served as the center of his aesthetic proposal for years along with other reference icons of international culture and politics. Signs, intertextualities, symbols and other allegories always accompany him.

For some time now he has been moving in other creative directions, changing protagonists, themes and for the moment abandoning the texts with which he reinforced the message of his pieces. A rupture, both formal and conceptual, is evident in the series he exhibited in his studio at the last Havana Biennial.

“In the context of the event I was developing a series called ‘Los peces de colores.’ They are comments on current times, as well as a look at the challenges facing the country and the world in general based on its most vulnerable protagonists. You can see a change regarding the complexity of the base drawing in the pieces and a relative distancing from the codes that I’ve been using in recent years. For the time being the leading role of the female figure disappears as a metaphor for the nation and characters taken from the humblest classes of society will speak. Workers, farmers and people disconnected from any well-remunerated activity. You can also see more emphasis on the background that supports each character and a total absence of texts,” said the creator, who has participated in 30 exhibitions in Cuba, the United States, Germany, Spain, Poland, South Korea, Portugal, Ecuador, among others. His graphic work is found in collections of these and other countries such as Brazil, Mexico and Norway. He has been awarded several prizes as a designer and graphic artist.

“I wouldn’t be so sure when to separate art from design,” the creator, who is an enthusiast of the old-fashioned glamor of mid last century, has expressed multiple times.

What is there about the 1950s that has inspired you so much?

Beyond that magic of the period, which would be a subject for another reflection, it is its visualization that I find very attractive: it clearly expressed the late examples of phenomena such as styling, the seduction of forms, a way of assuming the line, by way of example, from symbolic aerodynamic principles, because it suggested that life and its consumption fetishes were flying at speeds greater than those actually achievable by the technology of the time; the cars, for example, were conceived to move at a speed that none of them was able to or could achieve for those times. That somewhat naive but at the same time very eloquent way of doing defined an elegance, a lust for form, which even today seems insurmountable to me.

How do you escape from creative monotony?

My work often is based on the recombination of symbols, icons and ideas of cultured or popular visualization. It is not particularly hard that, as these signs are renewed, new ways of recombining them appear spontaneously.

The method can be similar in many cases; but the result can always be original. As reality tends to escape monotony, my work, which is mostly based on its analysis, escapes with it. It’s not something I propose on my own. It just happens.

I started my personal projects in the field of art when I was almost 40, to escape from monotony. Before I didn’t feel the need to share a certain vision of the circumstances that surround us and built with my contemporaries. But if along the way I stop having something interesting to say, I will again face the monotony, I will stop as I did when I took the first step, naturally, and I will continue doing anything else, be it design, writing, even cooking, if it’s worthwhile.

What will come after the Biennial?

We are working at the same time on five different projects. Four on canvases and one on cardboard in small format. So far I can tell you that two are personal exhibitions in the United States and the rest can be considered surprises because there are still no definitive confirmations. We continue expanding previous series and we will start working on new supports.

2018 was an exhausting year with three personal exhibitions in the United States, but after a couple of months of rest and laziness we started with new energy and many ideas, given the very interesting situation that surrounds us.