Ariel Montenegro
in Deep down
0 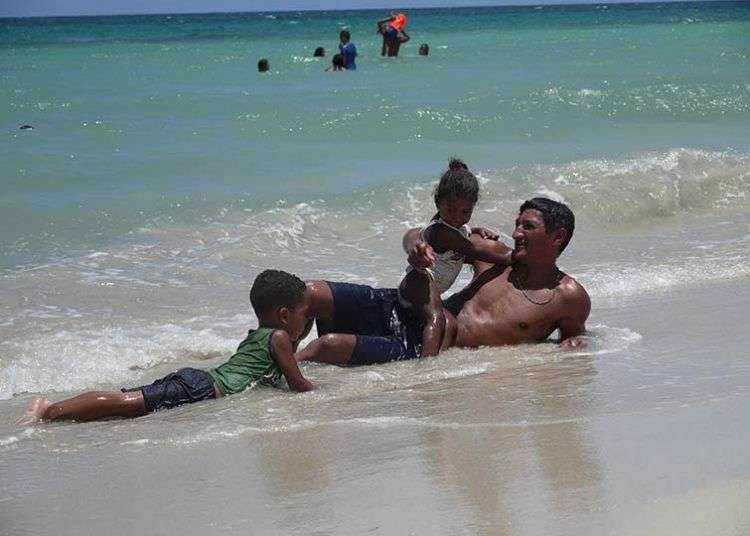 The obvious choice in Havana during summer is the beach. Thousands of people daily travel to the Havana’s Eastern beaches

Guanabo, one of the most visited beaches in the north coast in the capital, is 20 kilometers from the city. That distance by public transport is covered by the 400 bus, with its first stop in Old Havana, across the train station.

Early in the morning, hundreds of people get to that bus stop, but the crowd goes unnoticed until the bus arrives. Bunches of dozens of people start coming out from the park across the street or anywhere else and the line gets bigger.

However, there is no chaos. A transport officer and a policeman are in charge of organizing the line. The first one is Jorge Luis César and is a traffic inspector. He is in charge or distributing tickets and determining the order people will get on the bus.

“The first ones to get on the bus are four employees from the bus company, then 24 people (the tickets assures them a seat), two disable people, two pregnant women and 30 people standing ”, pointed out Jorge Luis.

In addition, he affirmed there is never chaos at the first stop because there they have the support of the police and a few meters away there is the Ministry of the Interior, which steps in when things get out of hand”.

There is a bus every 13 or 16 minutes, it is usually faster than during the rest of the year. According to Cesar, this bus service is increased during the summer.

However,sometimes it may be delayed more than an hour and the trip takes another hour, so hundreds of people can come together in a single bus that can take 62 passengers. Though some people use cabs, others prefer to wait than paying 25 pesos to a taxi driver.

The bus leaves from the first stop with the established amount of passengers but people travel with packs and bags, balls, towels, food, and even tents, which makes the trip harder.

Once people get to the beach they forget about the long hours and the hard journey. Some of them play ball, build sand castles with their children, read or sit and drink a bottle of rum.

It is worth highlighting the lack of commercial activity in the area, except for street sellers. Buildings by the beach, which may have served commercial purposes, are abandoned or collapsed at some point and now cast shadow only.

There is not a stand in the sand for selling drinks or food, so most people bring the food from home, most of the time cooked the previous day and left under the sun the whole morning.

After eating, all the wastes are dropped on the sand because there are no wastes baskets in the nearby area. The lack of baskets for the disposal of wastes is not a pretext for dropping them on the sand, but it definitely contributes with that.

None of this seems to mind all those who took the long trip to Guanabo. They enjoy the beach because as stated by Victor, a 48 year old man, “the water is the same everywhere and travelling to Varadero is too expensive. I have only been there twice in my life, not to mention the cays!”

After 4.00 pm people start preparing their return to the city, which is worse. The desire of getting home and take a bath and rest, the heat and alcoholic drinks taken during their stay are never a good match.

One of the greatest problems is that many people refuse to pay the tickets and the driver of the bus gets upset, because his salary depends on what he collects during the journey. There isn’t the policeman I saw on the first stop in the morning and, as said by Jorge Luis, fights are quite frequent on the return from Guanabo.

Nonetheless, thousands of people daily take into account the cheap price for a long, tiresome, troublesome journey to a dirty beach with shortage of supplies, because, at the end, the water is the same everywher

"If they don’t let me play with my country, why not do it with another"