carrasco
in Deep down
0 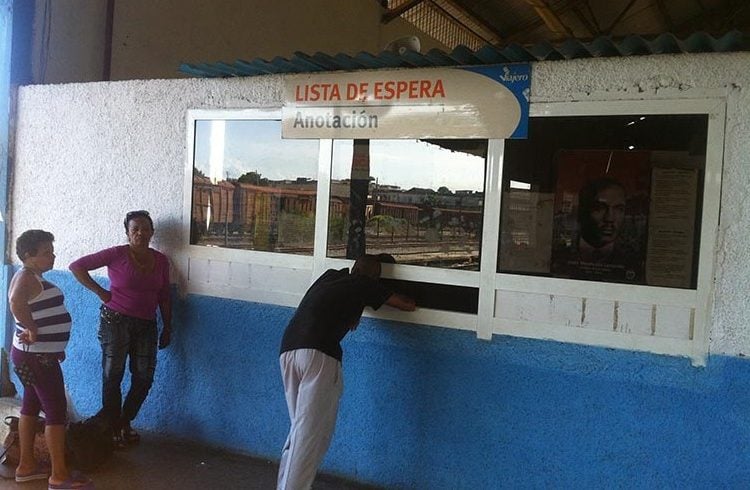 In Florida, Camagüey, Olivia’s family used to have a business. Her mother, grandmother, brothers and cousins took advantage of living opposite the Railway Terminal, and waited in long lines to buy tickets, which were then resold in the same Terminal for double, triple, or even four times the original price, depending on the time of the year and how desperate the passenger was.

You could only buy three tickets per person, and each train ticket to Havana cost 17 pesos. So, once resold the tickets, earnings, though were still insufficient, solved the most basic everyday expenses, even if none of the family had been employed by the state.

The family of Olivia and others were neither are the only way to wangle a ticket for interprovincial trips by bus or train, avoiding the lines to book in advance at the terminals, or the legendary waiting lists of which one never knows what time you will leave.

The black market prices at La Coubre Terminal, in Old Havana, rise a little bit more. There is a long chain of people that begins in the worker who buys the ticket at the terminal and ends in those who finally sell it to the passenger. Everyone who integrates this chain, not surprisingly, “gain some profits of this process”.

So, drivers, revisors, sellers of tickets in booking agencies and a long etcetera take advantage of the plight of transport in Cuba a nd also solve the problem to those who want to leave and have some CUCs in their pocket.

If you arrive at La Coubre Terminal intending to travel to Camaguey, for example, have to buy the passage five days i n advance or entering the waiting list. Otherwise it is necessary to fall into the hands of scalpers.

Arriving at the Central Terminal, passing through the park in front of it (place where the taxis to Guanabo beach park), there is a man of over 50 years with a cane that is exclusively devoted to that. This man knows when someone needs a passage as if by instinct.

– Are you looking for passage? Where are you going?

On a walk through La Coubre more than three different men approach me, proposing the same. The fact that these tickets are stolen does not mean the resellers to hide to propose them to you. Quite the contrary, they call you desperately, loudly, even in presence of those who patiently are queuing on the waiting list, and a police officer prowling the area.

One of these men sells the tickets to Camagüey on 5 CUC, plus the cost of the luggage. Another of them lowers the price to 4 CUC. “On the bus, he assures me, you can go on the schedule that you please. One departs at 9 am, and the others at 2 pm, 6 pm and at 7:45 pm “. I ask about trains. “Do not travel on that, bro, that is bullshit.”

By asking on the check box of the Central Terminal, I find out that there are already no special trains, which previously differed from regular ones (called milk trains) by having a somewhat higher price than the 19 pesos that cost a ticket on the regular, not carrying anyone standing, offering cheap snacks and arrived faster to targets. “Now they are all milk trains, because they are all equal. They stop everywhere, “the one in charge of public information tells me.

Only those who truly can not afford the bus, go by train, where the uncomfortable seats, the constant stopping, the crush of people standing with large packages, lack of services to passengers and the constant theft, become even a short journey into a hell.

At La Coubre Agency Reservation, I propose a “little help” to the lady selling tickets, I tell her I have sick relatives in Camagüey, and I need to get something quick. “I advise you to write down your name on the waiting list. That is far more complicated. A few days ago almost all the staff was changed because there was trouble, and I still do not know those who entering new, “she says.

The new mechanism is the usual one but with different people. Apparently, resellers still have contacts with more powerful workers that escape to this prophylactic work. The truth is that workers of travel agencies such as La Coubre even sell the tickets of each bus designated for passengers with deceased relatives and other emergencies.

Upon leaving the Terminal I find again the man with the cane, the one who first proposed to me a ticket in 6 CUC.

-Tell me, do you still want the ticket? – I already got it, buddy. Someone sold me one in 4 CUC. Yours was so hot. Then he laughs, like saying you caught me. And tells me:

-Imagine, everyone has to live.