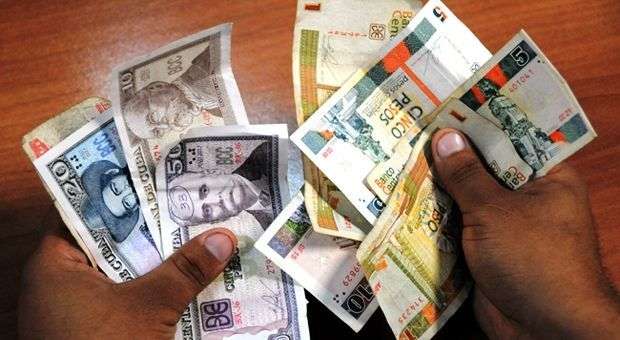 One part of the experiment of removing the dual currency began years ago. As far as many economists suggest, the disappearance of the convertible peso (CUC) first passes through the unification of the two current exchange rates.

This process will occur by the devaluation of the official rate (1CUC for 1CUP), to be increased to meet the rate of exchange houses, CADECAS (1CUC for 25 CUP). The disappearance of the dual currency would require a “unifying rate. “

The first new exchange rate between the Cuban peso and the convertible brother is no secret, in fact was published in a special edition of the Official Gazette of the Republic, in January 2013, ten Cuban pesos per convertible peso. But it is a conversion in one direction; CUC to CUP, not the other way around.

For months, there were rumors that in Cuba there were state-run enterprises working with this special rate, but they did not mention which ones or since when. From Colombia , economist Pavel Vidal , former specialist of Cuba ‘s Central Bank said in a Lay Space magazine interview that Resolution 9 of 2013 the Ministry of Finance established a new special exchange rate for the sale of agricultural products to tourism .

Then, former Economy Minister Jose Luis Rodriguez wrote an article for The Economist of Cuba website, where he mentions a “exchange rate that has reached 10 CUP per CUC.”

In itself, Resolution 9, 2013 does not mention the term “exchange rate “anywhere there is talk of compensation that is added to the official exchange rate (1 × 1) . The compensation comes from the State Budget and applied for the benefit of producers marketing agricultural products (flowers included) to hotels and gastronomic tourism entities.

Said resolution implies that there is a fund in Cuban pesos, established within the State Budget and allocated to the Ministry of Tourism, to perform this conversion, which compensates the disadvantages of the one by one exchange rate. Some of the bills are managed by the FINTUR SA Financial House, which operates as an intermediary in those payments.

Compensation existed since November 2011 when the legal framework that allowed wholesale of cooperatives and farmers to the tourism sector was established. In January 2013, their number increased from 7 to 9 pesos, to encourage producers, says the resolution that introduced the change.

The vice president of the Council of Ministers and Minister of Economy, Marino Murillo, once said that the sale of products to hotels by peasants represented a problem for the subject of the different operating currencies in agriculture and tourism, but he didn’t mention what the real problem was … which is quite complex.

Convert ten pesos into CUC is not a simple operation. It takes its dose of mathematics. According to Resolution 9, the tourist ” facilities receive invoices in Cuban pesos (CUP), divide the amount of these between the result of the sum of the compensation specified for each convertible peso, plus the rate of change adopted by the Banco Central de Cuba, that figure recorded in its accounting records and the payment order they issue in convertible pesos “(… ) .

In simple terms: if a hotel is billed 1,000 Cuban pesos for their purchase, they should divide 1,000 between one and nine, and then issue a payment order for 100 pesos convertibles.

If there wasn’t such compensation, hotels and other tourist facilities should pay a CUC for each Cuban peso that the products cost. In that case, for example, if the farmer sold a melon at 20 Cuban pesos, a hotel should pay 20 CUC. With compensation, the farmer receives his 20 pesos and the hotel just spent 2 CUC.

10 × 1 has become a standard reference post dual currency scenario. Economist Vilma Hidalgo, an authority on the subject of the dual currency, used the exchange rate ten to one as a hypothetical example of how the economy would work if there weren’t two exchange rates.

This is only an exchange rate established for relations of sale between agriculture and tourism , but to our knowledge , it has not been expanded to the rest of the economy, although the former economy minister , José Luis Rodríguez said in November 2013 that ” business entities covered by ongoing experiment are working with rates of 10 CUP for CUC. “

Is ten to one the unifying rate? Or is it a temporary experiment, like the seven to one, only in force for two years from 2011? For now, the answer is pending.

The source of life or a sample of blue Servando

Havana : the number of collapses caused by heavy rains rises to 135

Eliades Ochoa finishes 2013 with a string of concert