Few voters, and very few protected persons, is the panorama of this Tuesday in the electoral centers of southeast Florida, according to a report by the EFE agency. 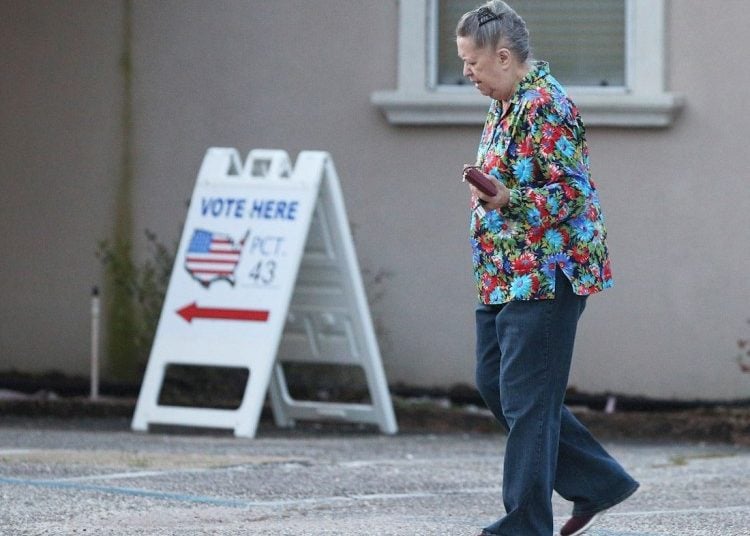 A woman goes to vote in the primaries in Pensacola, Florida, on March 17, 2020. Photo: Mike Kittrell/EFE

Gloves, some masks, a safe distance, a lot of disinfectant and, above all, few voters is what has been seen this Tuesday in the electoral centers of southeast Florida, open, as in the entire state, for primaries marked by the coronavirus pandemic.

Many have chosen to stay home so as not to take risks with COVID-19, something that civic organizations feared would happen and that is why they asked for the extension of the vote by mail, but Florida Governor Ron DeSantis ruled this out.

Others like Jorge José Atucha decided to exercise their democratic right and go to the polls.

“There are many people who are in quarantine or are at home and it is possible that this is affecting, although people are going out,” the 72-year-old citizen of Cuban origin who voted at a center in Doral, a city ​​of Miami-Dade County, told the EFE agency.

EFE visited half a dozen voting centers in different places in Miami-Dade on Tuesday and could verify that the vast majority of voters did not wear facemasks or protective gloves. Not many were hidden behind their masks to avoid getting infected.

Given the existing situation due to the COVID-19 outbreak, no mass events have been organized after the voting centers closed.

The highlight of these primaries is the duel between former Vice President Joseph Biden and Senator Bernie Sanders for the Democratic presidential bid in the November 3 elections. Meanwhile, the primaries for the Republican nomination are a pure procedure because the candidate will almost certainly be President Donald Trump.

The Florida Democratic Party, which has been highly critical of both the Trump administration and the state government’s handling of the pandemic, announced that it has taken appropriate steps to prevent as far as possible that its volunteers come into “contact with the voters.”

At the entrance to the voting centers, the volunteers with latex gloves had to disinfect everyone who entered with a hand sanitizer.

Inside the building, the voting machines and the voting area were constantly cleaned. Meanwhile, the lines of citizens were conspicuous by their absence.

“There really aren’t that many people. I was in the voting center, I voted and there were only three other people,” said Atucha.

In Ohio, where the primaries were to be held this Tuesday along with Florida, Arizona and Illinois, there is no voting because Governor Mike DeWine ordered the voting centers to close, after a judge refused to postpone the elections as he had requested.

In Georgia, Kentucky and Louisiana their respective primaries have been postponed due to the coronavirus crisis.

According to health authorities, there have already been more than 170 cases in Florida, six of them fatal.

Atucha, who emigrated from Cuba several decades ago, says he is “concerned” about the situation the virus is causing and encourages citizens to follow the authorities’ recommendations.

“Whoever does something they don’t have to do is because they want to, because we really have all the information about what we have to do and comply with to avoid being infected,” he argued.

In the United States, almost 6,000 cases of COVID-19 have been detected and a hundred have died from the disease, while President Donald Trump, among other measures, has recommended avoiding meetings of more than ten people.

Lawsuit against the governor

Several civic organizations filed a lawsuit this Monday against DeSantis and Florida Secretary of State Laurel Lee, who is responsible for electoral matters, for failing to extend the deadline for voting by mail.

That would have prevented “a large-scale electoral desertion,” such as the one that, according to the plaintiffs, is going to take place at the polls this Tuesday.

DeSantis ordered that from this Tuesday at 5 in the afternoon (20.00 GTM) all bars and clubs in the state be closed for the next 30 days to prevent that the virus spreads.

South Florida is the region of the state where the highest number of cases have occurred and although the population continues its daily life, the consequences of the virus have already begun to be felt in cities like Miami.