“I’m going to have nightmares for years, you too,” a firefighter told reporters. 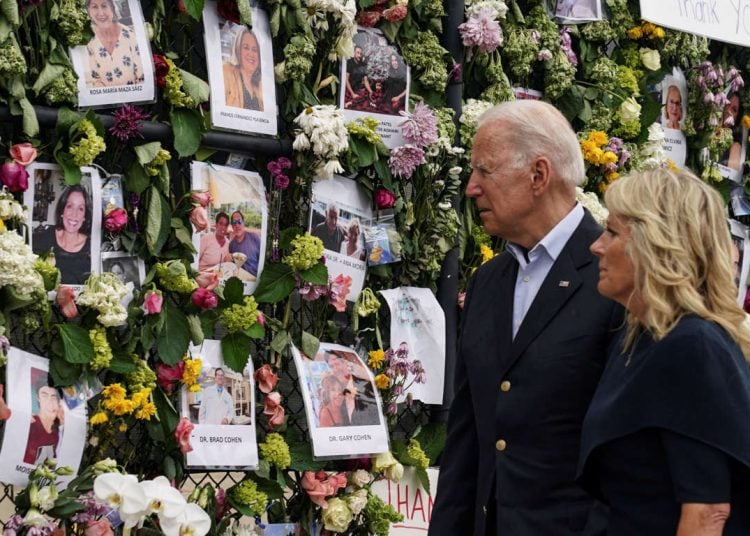 This Thursday the face of U.S. President Joe Biden emerged serious, lean, pained and incredulous from behind the tinted glass of the presidential limousine. For moments, the silhouette contrasted with the dark red paint on the side of a Miami Beach ambulance. It was as if an entire country was engulfed in blood.

It was clear that the president had a hard time believing what he saw. He had to take off his Ray Ban glasses to see better. But it remains to be seen if, in addition to the scene of desolation, the president found it difficult to breathe the atmosphere of death, from which a strong acid and penetrating smell was released, barely mitigated by the jets of water with which the firefighters tried to muffle it.

Observed from afar, it was easy to see that Biden had a hard time assimilating what he was witnessing. He also found it difficult to speak. Miami-Dade Mayor Daniella Levine Cava and other collaborators tried to prepare the president during a meeting an hour earlier; but in these tragedies any explanation always falls short.

A week earlier, in the early morning hours, the Champlain Towers South building had collapsed  in seconds, trapping most of the neighbors as they slept or prepared for bed. This Friday the number of registered victims increased: 28 confirmed dead and 120 missing. At this point, many rescuers give little hope of finding people alive.

After the first impression, Biden took refuge in the hand of his wife Jil, and approached the “wall of remembrance,” a large space where family members recall their loved ones or post their photos in the hope that someone will see them. find. Something similar happened in Venezuela in 1999 when a mountain collapsed, forever burying some 3,000 people. Or in New York, around Zero Point, after the 2001 terrorist attacks on the Twin Towers.

In the context of the Surfside tragedy, it is unknown whether Biden looked at each photo one by one and read their names. But he stopped for a long time at the “wall.” Later, he would say in a few short statements that it was a “moving,” “unforgettable” and “shocking” moment. After all, as one witness to the collapse put it, in the United States “buildings don’t fall down.”

Biden explained that he traveled to Surfside, the city within the Miami metropolitan area where the disaster took place, “to meet with families. The entire nation mourns these families. They see it every day on television. They are going through hell, like those who have survived the collapse and miss their loved ones,” he said.

While at the scene of the tragedy, he specified in the statements: “I’m a little late because I spent a lot of time with the families — a whole lot of time.  And I apologize for taking so long to get here, because I thought it was important to speak to every single person who wanted to speak to me.”

“I sat with one woman who had just lost everything: her husband and her little baby boy; didn’t know what to do.  I sat with another family that lost almost the entire family: cousins, brothers, sisters.  And to watch them. They’re praying and pleading that, ‘God, let there be a miracle.  Let something good happen,’” the president recalled.

When Biden left the premises, Thomas Wilson, a Miami-Dade County firefighter, stared at the horizon, where the visitor’s motorcade was lost, wondering if “this will do any good.”

The president left the place promising that the Federal Government would bear all the costs of the rescue operation, something “very rare but justified in this case,” he explained. FEMA, the Federal Emergency Management Agency, will provide shelter and protection for victims.

But the tragedy, which is already a picture of Surfside, came to light after Biden was at the airport. A group of rescuers found the body of the daughter of a firefighter who was also at the scene. Data are scant, but a county spokeswoman said the man was tipped off of the find. He asked to be taken to the place and, after collecting himself, hugged by colleagues, he took off his uniform vest and tenderly placed it on the corpse of the deceased girl.

The most shocking of the disaster of the Surfside condominium, which will finish being demolished soon — depending on the development of the Elsa storm, which is approaching from the Caribbean —, is the surprise, the unexpected and, above all, the great irresponsibility of specialists who until a few days ago assured that a building in frank deterioration, as it was demonstrated, was totally safe.

The firefighters jumped headlong, they came like never before. Now, they say, it’s up to the psychiatrists. “We’re prepared for many things, but some are not part of the rules. I’m going to have nightmares for years and you too,” Wilson told a group of reporters.

No one said a word.