Two popular Miami fruit shops dispute a similar name but what the public wants is to maintain a tradition and healthy and nutritious food. 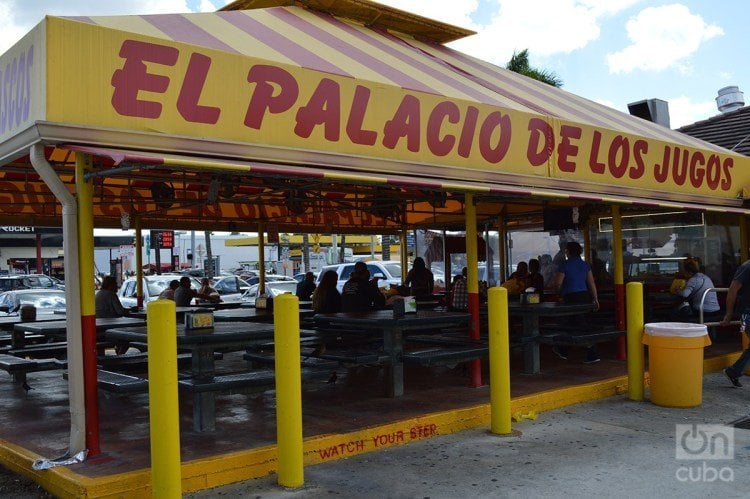 Fruit shops are one of the most popular establishments in Miami. There you can buy all kinds of imported fruits from the most diverse places on the planet. They serve monumental juices that put anyone’s sugar levels at risk but they don’t stop being consumed by liters. In recent years they have been accompanied by popular Latino food, desserts of all types and they have created an environment for family recreation.

Almost all of them are initiatives of Cuban immigrants who saw in it a commercial goldmine enhanced by quality and variety and are already an indelible part of the city whose inhabitants appreciate them. “We come every week, it’s a cheap place where you eat healthy food. It is easier for them to choose the fruits for us, propose juices and it is a place to have a social life and not being locked up at home,” explains Joselino Gutiérrez, a Cuban who almost always goes to one of the establishments of the Palacio de los Jugos.

The fruit shops are scattered throughout the city, there’s one in almost every neighborhood and lining up to buy something is natural given its popularity. Almost all of them have an outdoor space which makes the atmosphere cozier. They open early and close late and some are open round the clock.

And, not less important, the display of fruits, be they mamey, grapefruit, apples, bananas or pineapples, give it a clean and bright color that contrasts many times with the cold gray of the buildings surrounding the establishments.

A colorful aspect to which is added the decoration and painting of the establishments, all framed in a maelstrom of sales like few stores or supermarkets in South Florida. The fruit shops started appearing as soon as huge waves of Cubans started arriving in Miami after 1959, an exodus that left their country behind but also their fruit shops. “My grandmother always told me that the Palacio de los Jugos reminded her of fruit stores in Cuba. When she could no longer come, my mother came to buy what she asked for. And she died saying that the mangoes here always reminded her of Cuba,” explains Mary Gutiérrez, the daughter of Joselino, a student at the Florida International University, near which they have opened another Palacio de los Jugos that at noon is full of students.

Yes, because fruit shops are not a thing of nostalgic elders, they have managed to attract a young clientele that has adopted the habits of the tribe’s elders and by having food with the usual Cuban seasoning they have found on the street what they consumed for years at home made by grandmothers and mothers. “It’s my grandma’s food,” confirms Mary, who the day we found her was eating roast pork with peach juice.

Fruit shops are so popular in South Florida that a few years ago, when there was still a wet foot/dry foot policy for Cuban immigrants, and the smuggling of Cubans by sea was booming, authorities discovered that they were being used to search for boatmen to bring relatives of exiles living on the island to the United States.

Many did not want to believe it, because fruit shops are a kind of cathedral of Cubanness, an outdoor family table, inviolable in its principles and nature. Several police raids were necessary for the truth to come out. But they did not put an end to these popular establishments that despite the stormy economy continue to keep their prices low and good service.

On a normal day at lunchtime the frenzy is hard to describe. Dozens of employees serve, charge and clean, in a choreography perfectly designed by the day-to-day experience and the gusto for good service.

That is why when last week what was called “the juice war” broke out, more than one was astonished.

It all starts with their names. In Miami there are the Palacio de los Jugos and the Patio de los Jugos, among other fruit shops. It is precisely the similarity in the names that has led the owners of the first to sue the owners of the second because, as they argue in the documents of the lawsuit, the clientele can confuse the two establishments and each has its own pride.

In a very technical legal language, the Palacio indicates that the establishments have a “physical resemblance” in their decoration and design, the name is also very similar, even when pronounced, and can “confuse the clientele.”

The Palacio was founded in 1977 by the Bermúdez family, who haven’t made public comments on the lawsuit and neither has their lawyer, on the corner of Flagler Street and 57th Avenue. Since then they have already opened 10 similar establishments and it is a chain that has already managed to be a Miami brand image.

The Patio de los Jugos, which for now is restricted to an establishment in the city of Hialeah, in Miami-Dade County, is based on the same foundations but has developed the business in a different way. While in the Palacio de los Jugos prices are individualized by products and merchandise, in the Patio de los Jugos customers can create a food combination that comes out much cheaper than if they bought it individually.

But the owner of the Patio de los Jugos is not worried about the lawsuit. He doesn’t believe that customers can get confused and that between the two companies they can cope with everyone who appears in the establishments. They also have different personalities. “It is completely different. The Patio is the Patio and the Palacio is the Palacio,” said to the newspaper Miami Herald the owner Yoel Hernández, who took over the place more than a year ago and kept the same name. That’s why he doesn’t understand the origin of the lawsuit well. “Maybe they are filing the lawsuit because my food is better,” he speculates.

If we were to judge by the similarities in the names, the lawsuits would never end because in Miami, in addition to the Palacio and the Patio, there is also the Capital de los Jugos, the Rey de los Jugos and the Castillo de las Frutas. The Palacio has sued two of these fruit shops but the process was dismissed by the judges.

But the “wars” between Cuban gastronomy or fruit shops are not the only ones. A decade ago, duels of “the true Cuban pizza” also took the “Rey de la verdadera pizza cubana” to court. The process has been lost in the deep well of the court archives and the rumor is that an agreement was reached outside the courthouse because the two pizzerias are still open and full of customers, especially at night.

The most natural thing that could happen is that this “juice war” ends the same way, because there is space for the coexistence of both establishments since, as Martha Stewart pointed out, this type of restaurants and fruit shops serve “the best food in Miami.”

It is unlikely that a similarity in name causes any confusion in the minds of customers who are always looking for the closest establishment. What they want is to have the fried pork meat, the “ropa vieja,” the Cuban sandwiches, all kinds of juices and coffee within reach of the stomach at any time and, in passing, a plate of pork rinds to satisfy their hunger and their taste.

Soon there will be peace in this “war” and the fruit shops will continue to be what they have been since they were created in Miami, an oasis of healthy and delicious juices.