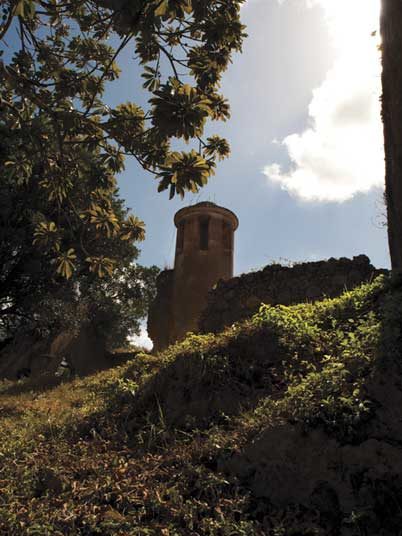 The sunny road to Cayajabos is like a permanent invitation for travelers to stop on by. A little over three miles from the city of Artemisa, another place with a mythological name is full of history, beauty and silence: Angerona.

Now in ruins, the ancient Angerona coffee plantation was almost a cosmopolitan point of convergence in its heyday. It was an Aleph where Europe, America and Africa coexisted in marked inequality. Four cultures and their traditions — German, Haitian, African and nascent Cuban — mixed together to shape a story of love and an example of an enterprising spirit.

Lt. Colonel Don Cornelio Souchay Escher, the owner of Angerona, was born on October 21, 1784 in the German city of Hanau. His family could be traced back to the 16th century French Huguenots, all of whom had immigrated to Germany in the late 17th century. The son of nobles, Escher was twenty-two years old when he arrived in Cuba and he never returned to his native Germany.

In Havana, he met Úrsula Lambert, a black Haitian woman who was born free in the late 18th century. After the Haitian Revolution, the colonist who owned her slave parents brought them and her to Cuba.

From the moment that they met, Úrsula and Cornelio shared economic interests. She looked after his administrative matters and even set up a small store on the coffee plantation to sell to the slaves there. The two began working together in 1815, but it was not until May 1822 that they arrived in Angerona. The story of possible love between the two has become a beautiful legend.

Cornelio turned Angerona into a coffee plantation without rival on the island. Its facilities had almost everything that could be needed. He anticipated even the smallest details, from bringing water by gravity from hydraulic installations to the wardrobe room, where he kept the clothing of the slaves in cabinets with a total of three hundred drawers, all of them with numbers and the names of each slave and his spouse.

People say that the plantation’s buildings were luxurious and spotless. According to many stories, his mansion was visited by artists, painters, engravers, writers, businessmen and wealthy members of the bourgeoisie who marveled at the plantation’s orderliness and wished to see it for themselves. At the mansion’s entrance, visitors were received by a statue of Angerona, the Roman goddess of silence. After being robbed and then recuperated, that statue is now on exhibit at the Museum of Artemisa.

Perhaps it was Úrsula’s hand that worked so many wonders. She was an excellent administrator and taught the slaves many things as a way of making their lives easier. Angerona was famous for how the slaves there were treated. The women who gave birth received special care. The slaves were not housed in classic-type barracks; instead, Cornelio created a type of village of twenty-seven huts encircling a plaza, each of which housed two families. This “village” also had a tower with a bell that was rung at certain times of the day. There were common showers and toilets, a kitchen and rooms for the overseer. It was all enclosed behind stone walls and a single iron door that still exists.

Úrsula was not a slave, but she could never have been the mistress of Angerona. Cornelio never married and he never had children. His heir was a nephew whose poor management ended in his downfall. Úrsula was very important to the slaves of Angerona. They loved and respected her. She also won the respect and admiration of many people who were different from her, both socially and racially, but who were her friends.

Cornelio died in Havana on June 12, 1837. The record books of the Church of Cayajabos say that he was buried in the plantation’s cemetery, remnants of which still remain.

The Haitian Úrsula also died in Havana, in 1860 at the age of seventy. It is said that she set a precedent by defending her status as a working woman in a lawsuit when an attempt was made to exclude her from a list of Cornelio’s creditors. When she left the coffee plantation she was over fifty years old; she became established in the Havana neighborhood of La Merced. She made it clear in her will when she died that Andrés, Cornelio’s nephew and heir, still owed her between 10,000 and 12,000 pesos of the 20,000 that Cornelio had assigned to be paid to her in annual sums.

Angerona is no longer a coffee plantation. Now it is a collection of ruins, taken over by the goddess of silence, and surrounded by a fantastic environment that invites you spend a tranquil afternoon in the shade of any of its crumbling but dignified buildings. The legend of love inspired by the relationship between Úrsula and Cornelio was the basis for the Cuban film Roble de olor (Oak Smell), which, according to some, was the last thing that Cornelio said before he died, perhaps in evocation of the Haitian woman with whom he shared his life.

To have talent is to have a good heart