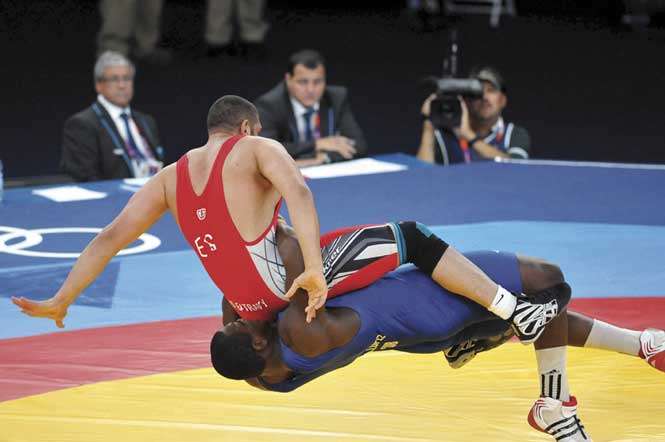 In the smothering summer heat, the 30th edition of the Olympic Games, London 2012, became a source of entertainment for Cuba as a whole.

While our delegation was much smaller than on previous occasions (110 athletes), the results were not long in coming: Cuba finished in 16th place by country and first in Ibero-America, with 5 gold medals, 3 silvers and 6 bronzes, surpassing its performance in the 2008 Olympics in Beijing.

Another athlete who did not disappoint his people was the flag-bearer of the Cuban delegation, Greco-Roman wrestler Mijaín López, who was confirmed as indisputable leader of the 120-kg division when he won his second Olympic gold medal.

“I’m going with a goal, which is to win my second title, and to provide the thrill that the people of Cuba want, which is a gold medal in the Olympic Games,” the hefty 6-foot-4-inch wrestler said shortly before departing for London.

This giant of a man, a native of the western province of Pinar del Río, commented that it had been an excellent Olympic cycle, in which he obtained good results and was able to use his time well for training in Italy.

López, who holds four world titles, talked to us with dissatisfaction about the final of the 2011 World Wrestling Championships in Istanbul, Turkey, where he surprisingly ceded his throne to the young Turk Riza Kayaalp.

“It was not the outcome that I or the public expected. A lot of things happened; I didn’t make my weight right, I was overconfident at the competition. But I think the defeat did me good because we learn from our setbacks, and it has forced me to try a little bit harder, to get over that disappointment that left me smarting. And now I’m going to the Olympics with my mind more prepared than it was four years ago.”

This stellar athlete, who turned thirty on August 20, got even against the Turk 3-0 in the semifinals, setting the scene to win his second medal.

“This time I was able to beat him because he didn’t have the support of his public,” López joked. “I would have liked the final fight to be against him, it would have been more wonderful, but he didn’t make it. He won’t be enjoying himself the way I am now,” he added with a smile after beating Estonian Heiki Nabi (2-0, 1-0) in the final match.

“To be the flag-bearer for my country for the second time and win a gold medal again is very meaningful for me. For the second time, I was able to push my delegation forward,” he said to reporters a few minutes after the match was over.

He dedicated his success to his country, his town of Herradura in Pinar del Río, and his people.

Before leaving, he had said: “The Cuban people should expect the maximum from me, they should expect Mijaín López’s smile,” and after his win, he added, “I made good on my promise.”

That happiness was shared by the No. 2 coach for Cuba’s Greco-Roman wrestlers, Carlos Ulacia.

“Mijaín won this medal in better shape than what he demonstrated in 2008 in Beijing. This time he was more prepared, more mature as an athlete. He fulfilled the tactical plan to the letter; we told him that for the final combat, even if he was the favorite, that he could not be overconfident, and he followed that. We feel very proud of this work, we were always confident in him,” Ulacia said.

López, who was recently elected one of the five members of the Pan-American Sports Organization’s Athletes’ Commission, had words of praise for the team of coaches who worked with him every day.

“Without question, it is a great privilege to have a trainer like Pedro Val — who was chosen best wrestling coach in the world in 2010 — as well as Ulacia and Filiberto Azcuy — a two-time Olympic champion — all of them examples to be followed. One of the most important things that this team has is, without question, these figures who lead us.”

This multiple world champion and father of a one-year-old baby boy, who he says is his “best championship,” or his “biggest medal,” describes himself as a very sociable man who is dedicated to his family, with whom he maintains very good relations.

Raised as part of a sports-loving family, Mijaín became interested in Greco-Roman wrestling when he was ten years old, and affirms that part of his success is due to the support he has received from his family.

He also had words of praise for Pinar del Río.

“That is my hometown. I think I am who I am today because that’s where I’m from; that’s where I first got into sports, plus, it’s a very fertile province in terms of high-level athletes.”

“When I defend the colors of Cuba, I feel really good, because I know that they are all there sitting down, waiting, watching the fights, especially my family, and that is something that you really feel inside. Your blood gets really hot, and I think very few people in the world feel that pride like we Cuban athletes do.”

López, who says that even as a little boy he never liked to lose, enjoys hobbies such as basketball, dominoes, discotheques and music, which he listens to according to the occasion.

When he retires, Mijaín would like to become a coach, to teach others what he has learned and train others who might be better than him.

But that is a possibility that many experts believe is still far-off, because, having just turned thirty, he could aspire to climb the Olympic winners’ podium again in the Rio de Janeiro Games in 2016. His determination and time will tell.

“I feel like I’m in good shape to stay in the fight for another four years, but that depends on a lot of things”.

To have talent is to have a good heart