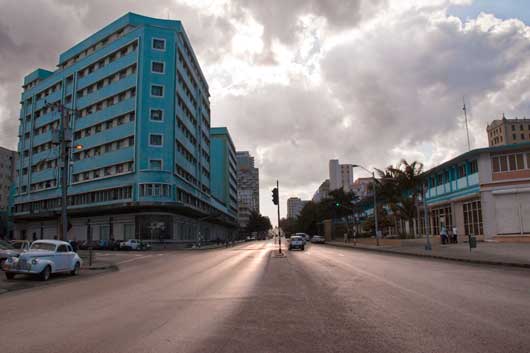 How many thousands of pedestrians – Cubans or otherwise – that daily walk up and down La Rampa know the history of this section of street that, for the last few decades, has been the Heart of Havana?

It is the segment of 23rd Avenue that runs from Infanta Avenue to L Street, in Vedado. Or what is the same, the 500 yards that extend from the seat of the Ministry of Foreign Trade to the Habana Libre Hotel.

There is an aerial photograph of La Rampa before it existed. It was taken from the sea in the early 1940s. What does the photo show? Nothing. Practically nothing. Ten, fifteen years later the shot was repeated and by then La Rampa was La Rampa.

Early twentieth century Havana practically ended at Infanta Avenue, and Vedado barely exhibited nascent development as far as 15th Street. During the 1920s, 23rd Avenue, laid out in 1862, was extended as far as the sea and thus intersected Infanta, which was lengthened beyond San Lázaro Street after 1916.

What would later become La Rampa was then — and would continue to be for many years— a road bordered by deep pits. One of these hollows, adjacent to the Hotel Nacional, built in 1930, was home to notorious boxing matches, while another cavity was the seat of an improvised baseball field. The corner of 23 and L, where the famous Coppelia ice cream parlor now stands, was the site of Reina Mercedes Hospital, which was in operation until 1954. The property, which in 1886 cost 7,000 pesos, was sold that year for $300,000. A construction company wanted to build a 600-room hotel there.

The owner of the lands of La Rampa was Bartolomé Aulet and he built his house at the bottom of a pit near what is today the headquarters of the Cuban Institute of Radio and Television. When he died in the early 1940s, he named his niece Evangelina as sole beneficiary. But the girl, according to one of the clauses in the will, could not take possession of her properties until 1975. She did not have to wait that long. She sought the support of Colonel Pedraza, then Cuba’s second Strong Man, and he made sure to convince a corrupt judge that the dead man’s will was simply unjust and arbitrary. All said and done: the niece and her buddies became wealthy overnight.

The Italian Amadeo Barletta was one of the first buyers in the area. A fascist, agent of Benito Mussolini and organizer of the Black Shirts in Havana, this character had been expelled from Cuba during the Second World War and reappeared in 1946 as the representative of General Motors. It is said that he was the boss of one of the four great mafia families that operated in Cuba until 1959. He had multiple cover companies: Unión Radio, El Mundo newspaper, TV’s Channel 2… and of course, Ambar Motors, an office building that is today the home of the Ministry of Foreign Trade.

It was Goar Mestre, the Cuban media magnate, which first realized the potential of La Rampa. He chose this location ignoring other proposals. He thought that if he built there, the neighboring plots would go up in value and the area would immediately be built up. Radio Center was inaugurated March 12, 1948. Shortly before, on December 23, the Warner Theater – today Yara Cinema – had opened its doors as part of a media complex, with a gala performance attended by the nation’s President.

After that, La Rampa, named for its steep slope, developed in the blink of an eye: apartment buildings such as the Retiro Médico with its murals painted by Wifredo Lam, restaurants and night clubs, advertising agencies … The building that today houses the airline offices was a shopping center. Its art gallery hosted an exhibit in April 1953 of paintings by the mythical group of artists, Los Once (The Eleven), which revolutionized Cuban art of its time.

It is said that one way to measure commercial activity in an area is by the number of banks located there. No less than eight bank headquarters or branches established on La Rampa, and another three, which did not arrive on time, set up on nearby streets. La Rampa was also the miracle of Havana shopping. Residents of the capital had become accustomed to go shopping on mainly level streets with portals protecting them from the sun and rain. La Rampa had none of that and yet it became fashionable.

It is impossible to speak of La Rampa without alluding to the collection of art works exhibited on its sidewalks: a very good selection of Cuban painting is built into those granite tiles. Nor can we avoid mentioning the Cuba Pavilion. It was inaugurated in 1963, on the occasion of the celebration in Havana of the World Architecture Congress, when 600 of those professionals participated and a total of 1,300 persons attended. It was designated as an exhibition hall and hosted, among other events, the First Exhibit of Cuban Culture, in 1967, and in the same year, the important May Salon, that brought to Cuba from Paris a sample of what the world was doing in the domain of the fine arts. It was exhibited in this construction open to the breeze and the view, a display of aerial architecture where gently sloped paths wind along vegetation and crystalline waters