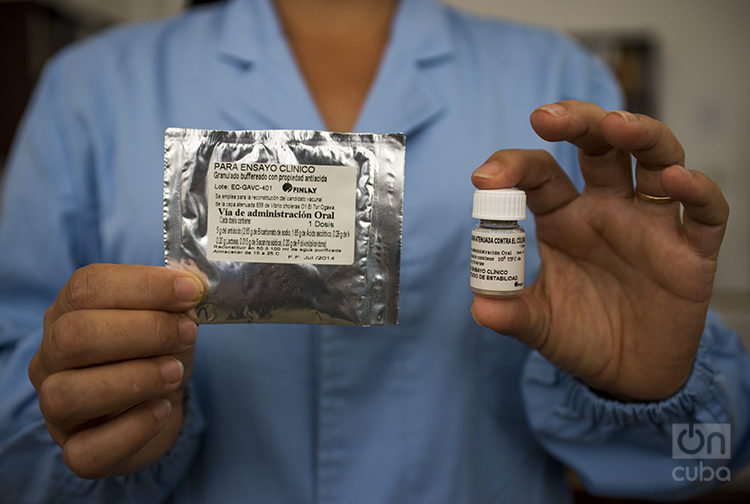 Dr. Rafael Fando, of Cuba’s National Center for Scientific Research, (Centro Nacional de Investigaciones Científicas, CNIC) is the leading researcher for the anti-cholera vaccine. He began working on the vaccine since he was a student and continued after graduating. The CNIC has existed for half a century and the average age of its scientists is 40. They carry out biomedical research on natural products, environmental studies, and biological products for preventing infectious diseases.

Why work on a vaccine against cholera, a disease whose incidence is practically non-existent in Cuba?

It was an idea of Fidel’s, in 1991, when the epidemic began in Peru. Cuba was going through its most difficult years of the Special Period (economic crisis) at that time. The idea emerged because no pharmaceutical company would work on the issue; it’s not a vaccine that can generate major revenue. A number of us at different research center began the work, some with an inactivated variant, while we used a live vaccine to be administered in a single dose. Anti-cholera vaccines are meant for poor destinations, underdeveloped countries, which is why the ideal is for a single dose to be enough.

Work on this vaccine has been going on for almost 25 years. Why so long?

Cuba does not have enough resources to devote them to rapidly developing a vaccine for a disease that we practically don’t have in this country. We’ve made progress to the extent that there’s been financing. The first vaccine candidates were obtained in ’96, and that same year we initiated clinical trials. In 2006 we were able to carry out a trial in Mozambique, but then the project came to a standstill and we came back to it in 2013, when we obtained financing to set into motion this costly system for evaluating vaccine.

When cholera came to Haiti and we had some outbreaks in Cuba, we returned to the work in coordination with the Finlay Institute (to obtain experimental batches of the vaccine) and the Pedro Kourí Institute (which oversaw clinical evaluation).

Never. Credits for this project are 100 percent Cuban, except for the trial in Mozambique, where there was co-sponsorship with that country’s health department.

The WHO believes that the Cuban vaccine is important for Haiti. Why?

There is an extensive cholera epidemic there, and coincidentally, the vaccine that we’ve been developing has the same serotype as the strain in Haiti. Our vaccine has the advantage that if we administer it properly, it provides protection against a subsequent infection.

How long will it take for the vaccine to be available?

We have to finish Phase II clinical trials. Then we would have to have a factory that would guarantee the necessary production. And moreover, the vaccine would have to be prequalified, that is, certified by the WHO. We need to locate a scenario where there is sufficient cholera development to be able to evaluate our vaccine in a Phase III study, where safety is also measured, but above all, effectiveness. In our trials, the vaccine has generated 100 percent protection against cholera, and in 80 percent of cases, it has prevented the infection of the individual as a consequence of the bacteria, which means we are preventing the disease from being transmitted, by acting as a barrier.

If vaccines already exist in the world, why not use them?

Because they are vaccines that are used in the travelers’ market; one dose costs 40 euros, and you need two doses. It’s not a vaccine that can be used by the countries that have cholera, which are the poorest.

How much would the Cuban vaccine cost?

Our vaccine could compete with India’s, which requires two doses and costs about $3.70 per dose. In Haiti, 300,000 doses of that vaccine will be administered at a total cost of $3 million, a sum that is not feasible for countries that suffer from cholera. The advantage of ours is that we might have a better price, and by being administered in a single dose, we would save on an immunization campaign, which is more expensive than the vaccine itself.

Could relations with the United States facilitate any type of collaboration?

Without question; it will do a lot to facilitate academic exchange. In 1999, I traveled to the United States, to a conference on cholera, but every other time I’ve been invited they’ve denied me a visa. I hope that we can achieve better connections now, and even investment to be able to develop this product. Today we can make batches of up to 4,000 doses in Cuba, but that’s not enough. A small investment is planned, to be able to obtain up to 250,000 doses annually, but that’s not enough either.

We are planning a factory in the Mariel zone to be able to achieve external financing. We would need about $40 million, and with those resources we could have the vaccine in a minimum of three years.