Isaac Delgado: Cuba is an inspiration 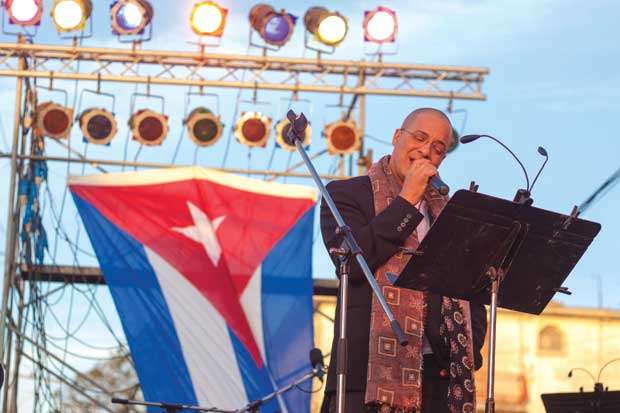 In recent months, Isaac Delgado has returned to Cuba several times. At first it seemed like nobody wanted to know about it, or as if Isaac himself had decided to go unnoticed. During his first public performance, at a concert organized by Carlos Varela with musician friends to celebrate his birthday, Isaac came onstage almost at the end, after most of the guests had performed. With the exception of two or three public commentaries, nobody that night paid too much attention to the presence of salsa’s “El Chévere” in Cuba.

Several weeks later, Isaac was back in Havana to sing with Silvio Rodríguez at one of several neighborhood concerts organized by that singer-songwriter. One usually finds out about these concerts the day after they’ve happened, when photos begin flooding the social networks. But this time, that wasn’t the case. Two or three days earlier, they announced that Silvio would sing in the Tamarindo neighborhood, and that Isaac Delgado would be with him. That day, Isaac admitted, “I’m still just a guy from the neighborhood,” and he ended his brief but unforgettable performance with a world premiere of “Cubanos.” The lyrics of this song describe, to a salsa beat, the people born on this island as people born “of son and rumba… Latinos with a universal touch,” capable of turning “pain into melody” and willing to take “the path between tears and song.”

It would have been hard to imagine hearing those words live in Havana, in Tamarindo, and with Silvio Rodríguez seven years ago, when one of our most popular salsa stars decided to continue his music career in Miami. Today, certain events have made it possible to understand this in a calmer way.

We found out that he would be back again to sing at a gala tribute to Benny Moré on May 22 during the Cubadisco Awards, and we didn’t want to miss an opportunity to chat with him about issues that we think are essential.

You left Cuba during a very important moment in your career, at a time when you had completely won over this country’s public. Why?

I am lucky to have been able to have a successful career in my country. The 1990s were very significant for my music, but I was already living in Mexico before I went to Miami. I spent two-and-a-half years coming and going before I went to the United States. I made that decision in the middle of a number of personal and professional problems, and after my mother’s death, because the world came crashing down all around me at that point.

What is it like for a Latino musician—in your case, Cuban—to have a music career in the United States?

Being an immigrant is always an obstacle, but it’s even harder for Cuban artists. We don’t have a real platform; that is, Venezuelans hold concerts in Venezuela, Colombians in Colombia, but Cubans didn’t have that opportunity. Moreover, we are not invited to major national or international media events, even though we have phenomenally talented people.

Nevertheless, I have learned a lot, especially in the world of production. I have worked with producers, arrangers, composers, and musicians who have brought a lot to my career. I’ve shared the stage with artists who are now at the top of the Latin music charts, and it is a great privilege to have worked and grown together with them.

To be honest, I could never ever complain about the public that has stood by me in the United States, much less my Cuban fans, and that also includes my Colombian, Peruvian, and Venezuelan publics. They have adopted me on the “enchanted island” (Puerto Rico) as one of their own. I’ve gained another country, but I believe that my greatest achievement has been watching my children grow up without losing their identity.

How was your reencounter with the Cuban public?

I have a lot of pride and affection for all of those people who I didn’t see for a while and it’s been very moving to be with them. To see how they recognize you, applaud you, and keep loving and admiring you for your talent and art is a very great thing, it is beautiful…

Cuba is an inspiration for everyone who is far away. One way or another, you’re always thinking about her, through a relative, a meal, an experience, a problem, an opinion, or a love… This is my Cuba, our Cuba…