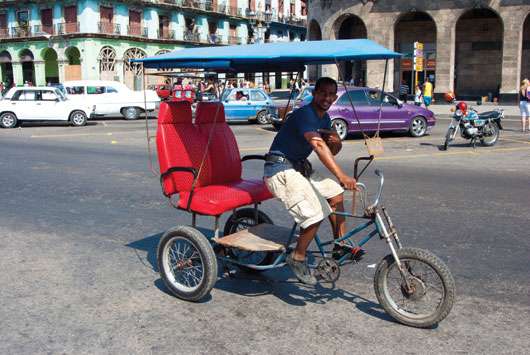 When it comes to public transportation, you have various options to choose from if you want to move from one part of the city to another. To travel around Havana and enjoy the sights you can choose Cocotaxis, delightful, safe and fast replicas that mimic the shape of a coconut, which you ride while watching the surrounding scenery. You can also hop on a horse carriage and evoke the time before motorized vehicles when people regularly used this form of transport, or hail or call a taxi in CUC. Or you can ride the so-called almendrones, which are nothing more than American cars from the 40s and 50s that operate in the city. They are examples of Cuban ingenuity, because under their hoods you can find prize-winning innovations. Private taxis (almendrones and any other model) can be found in all municipalities and cost 10 pesos (equal to 50 cents CUC). These fixed-route taxis pick up whoever hails them on the street, so you will probably share the ride with 5 other people.

If you prefer to pay for your transportation in national currency, you can take local buses with routes which crisscross the various municipalities of the city. These cost 40 cents (equal to less than 5 cents CUC).

In some Havana neighborhoods there is another very handy form of transport, bicitaxis, bicycles adapted to carry passengers over short distances. They cost 10 pesos and can carry two adults, although you would be surprised to see what else they can carry…